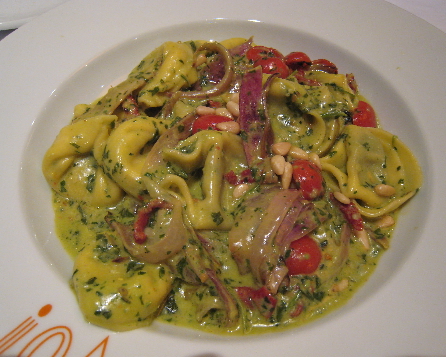 Perhaps the most memorable slogan to surface during the politics “dirtier than usual” Presidential campaign of 2008 was the frequently used American idiom “you can put lipstick on a pig, but it’s still a pig.” That expression is intended to mean something akin to putting a fresh coat of paint on a piece of junk and selling it for full price. In other words, it aptly describes most political campaigns which tend to be exhaustingly negative repeats of previous campaigns.

I promised myself not to ever let my blog slink and slither into the unappetizing muck and mire of politics and with the exception of the previous paragraph, I won’t. The expression “you can put lipstick on a pig, but it’s still a pig” ties in nicely with my inaugural visit to Bravo! Cucina Italiana. “How so,” you ask.

It’s been my experience that you can adorn Italian themed chain restaurants with a pristine veneer and over-the-top flamboyance, but they’re still chains in all their homogeneous fungibility. For the most part, that’s come to mean a stereotypically Italian (Tuscan is a current favorite) ambiance complete with faux artifacts and cheesy murals designed to appear priceless and genuine. So that the common paisan don’t feel left out, there’s also usually a lot of brickwork.

It means saccharine service in which the nattily attired chummy wait staff invades your personal space to the point at which you rush your order. Invariably this means you order something covered in an Alfredo or Marinara sauce that’s almost interchangeable between restaurants, but increasingly it also means grilled “Northern Italian” specialties. Mostly it means predictable, pretty as a picture cuisine with the characteristic ability to lull your taste buds to sleep,

The truth is most people know exactly what they’re getting when they visit Italian chain restaurants and the predictability and consistency of experience is something with which they’re comfortable. There’s justs something reassuring about it all. I myself will admit to an odd and uninvited Olive Garden craving every three or four years. If you like predictability, you will love Bravo! Cucina Italiana.

Bravo! is a Midwestern based chain that has made significant inroads throughout the fruited plains. Thanks to an aggressive but well-managed expansion track, you can now find Bravo! in New York, Virginia, Pennsylvania, Texas and since 2007, in New Mexico where it is situated in the chic ABQ Uptown shopping Mecca. The Land of Enchantment’s rendition is the furthest west of any of the franchise’s restaurants.

In terms of concept, Bravo! might be called a “tweener”–somewhere between casual and fine-dining. It’s slightly more upscale than the Olive Garden, Carraba’s and the nearby Macaroni Grill. It’s a large restaurant, in line with the restaurant’s template of about 6,800 feet with accommodations for 200 guests. Bravo!’s Web site purports to emphasize “food that is fresh, made-to-order and made using authentic Italian cooking methods.” All food preparation is done in an exhibition kitchen visible from throughout the restaurant.

The concept also specializes in “Northern” Italian cuisine which in America has come to mean emphasizing wood-grilled meats and fish instead of pasta and tomato sauce. Pasta and tomato sauce are on the menu; they’re just the only options as at some old-style Italian restaurants. At Bravo!, pasta shares space on the menu with dishes made with cheesy cream sauces, rice dishes, salads, pizza and flat breads and grilled entrees.

While you’re perusing the menu, a member of the chummy wait staff will deliver a basket of warm, fresh, herb-infused focaccia bread to your table. The focaccia appears more “torn asunder” than it does sliced, a nice touch in my book considering most restaurant bread is under-sliced and you have to tear through that last bit of bread clinging to its doughy neighbor. It’s a buttery-tasting bread in which the herb infusion is redolent of basil and oregano.

The bread is served with the de rigueur bowl of olive oil spiced with, among other things, a bit of fiery red pepper. If that doesn’t do the trick for you, add Balsamic vinegar to the mix. Contrary to the tired adage about oil and vinegar not mixing, they’re often complementary.

The appetizers section of the menu is relatively sparse and includes a mix of predictable standards (such as calamari) and some unique offerings. A Saint Louis, Missouri standard not that common in the Land of Enchantment is among that latter. That would be crispy mozzarella ravioli , fried ravioli stuffed with cheese and served with two sauces, a basic herb-laden marinara and a creamy horseradish dressing. The horseradish dressing is somewhat on the sweet side with barely a horseradish kick, but it’s a good complement to the ravioli. We love the fact that sprigs of Italian basil are laid atop the ravioli. Few things in this world are as refreshing as basil.

One of the more intriguing options on the menu is christened with the oh-so-Italian name of “Mama’s Lasagna Bolognese,” made with creamy Alfredo sauce and the restaurant’s classic meat sauce. According to our waitress, it is a huge portion easily big enough to share.

If you’re not inclined toward prolific portions of pasta, a less prodigious option is the pasta torteloni, fresh cheese and spinach stuffed pasta tossed in a housemade basil-pine nut pesto sauce topped with sun-dried tomatoes, red onions and pine nuts.

If you’re tired of tomato and bored with Bechamel, this a nice, taste-bud pleasing departure. The torteloni are generously stuffed and prepared to just above al dente. What makes this entree a hit is the creamy basil-pine nut pesto sauce and the complementary toppings. This is a dish of complementary yet contrasting ingredients that come together very well.

Pizza and flat bread offerings range from the traditional Margherita and Napoli style pizzas to a Sicilian pizza layered with sweet Italian sausage, pepperoni, meatballs, mushrooms, banana peppers, mozzarella and provolone. Pizzas are in the “personal pan” size range of about ten-inches. They’re closer to thin-crust than to the conventional New York style crust. The crust isn’t nearly as pliable as New York style crust, but it’s crispy and has a nice char on the edges.

The Pizza Napoli is offered with Mozzarella di Bufala, the fresh water buffalo cheese which is more creamy, rich and delicious than standard mozzarella. For a mere pittance, you can ask for any other pizza to be “upgraded” to include this cheese. The sauce is applied lightly so that it complements other taste components. The sweet Italian sausage has just a hint of fennel, not nearly as much as we like, but it’s good nonetheless.

Bravo! Cucina Italiana, for all its predictability, does have some nice surprises here and there, but some aspects of dining at a chain Italian restaurant are missing. For example, the restaurant doesn’t capture you when you walk in with the irresistible aromas of well-seasoned sauces. That could be due, in part, to its high ceilings and yawning spaces. Service was somewhat transparent and rehearsed, wholly unlike the dynamic interaction you might be treated to at a family owned Italian restaurant. Still, Bravo! has its place and its loyal clientèle. Just don’t count me among them.