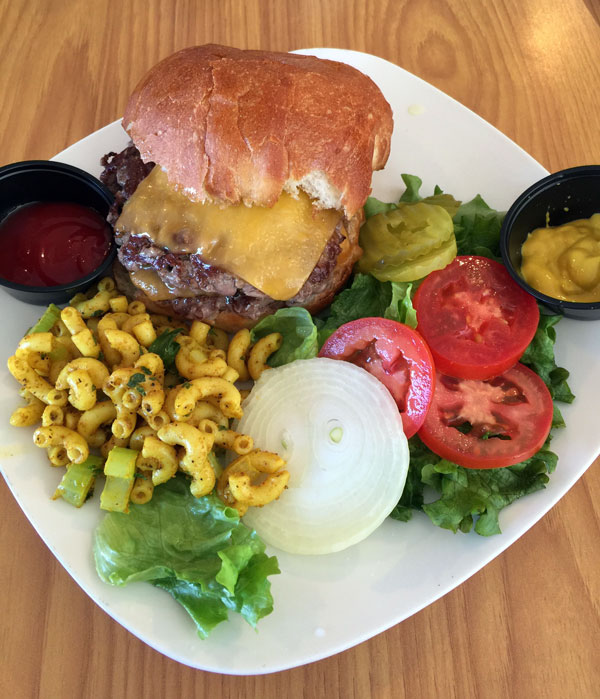 “You can find your way across this country using burger joints the way a navigator uses stars.
We have munched Bridge burgers in the shadow of the Brooklyn Bridge and Cable burgers hard by the Golden Gate,
Dixie burgers in the sunny South and Yankee Doodle burgers in the North. We had a Capitol Burger — guess where.
And so help us, in the inner courtyard of the Pentagon, a Penta burger.”
— Charles Kuralt, journalist, television host of “On the Road”.”

For more than a quarter century, award-winning journalist Charles Kuralt hit the road on a motor home, crisscrossing the fruited plains where waving fields of wheat passed in review and snow-capped mountains reached for cobalt colored skies. Kuralt loved the cuisine of the Land of Enchantment. In his book America, he declared the Owl Cafe in San Antonio, New Mexico “one of the best food tips” he’d ever gotten.

The advent of the information-internet age truly made the world a smaller place and by the close of the 20th century, the Owl Cafe had several contenders for New Mexico’s best green chile cheeseburger–including the Buckhorn Tavern just a few hundred feet away from the Owl Cafe in San Antonio.

An authoritative proclamation (made by New Mexicans who know what they’re talking about, not out-of-staters) certifying New Mexico’s best green chile cheeseburger, however, would not be made until 2009 when in the span of just a few months, two burgers could lay claim to the title of New Mexico’s best. Neither was Kuralt’s beloved Owl Cafe. In May, 2009, the Buckhorn Tavern became world-famous when its gregarious owner Bobby Olguin bested celebrity chef Bobby Flay in a “green chile cheeseburger throwdown.” The judges in the blind taste test were all New Mexicans.

November, 2009 saw the introduction of the “New Mexico Green Chile Cheeseburger Trail,” a listing of the Land of Enchantment’s most outstanding green chile cheeseburger restaurants, drive-ins, diners, dives, joints, cafes, roadside stands and bowling alleys. The Trail became the indispensable guide to one of New Mexico’s most iconic foods. To paraphrase Charles Kuralt, you can find your way across the Land of Enchantment using the map developed for the New Mexico Green Chile Cheeseburger Trail.

The New Mexico Green Chile Cheeseburger Trail was such a resounding success that it was brought back in 2011. Restaurant owners, staff and patrons nominated nearly 200 purveyors of New Mexico’s iconic green chile cheeseburger for inclusion on the updated Trail. The 30 restaurants receiving the most votes received an automatic bearth on the Trail while a panel of culinary experts added additional choices to ensure recommendations are available to visitors in all corners of the Land of Enchantment.

More than 10,000 votes were cast and when results were tallied, the top five vote-getters were New Mexico’s unique and ubiquitous Lota Burger; the Taco Box, a staple in Clovis and Portales; Bobcat Bite, selected by the editors of Bon Apetit Magazine as America’s best burger in 2007; and the Buckhorn Tavern and the Owl Cafe, the two legendary San Antonio burger establishments probably most responsible for the worldwide fame of the green chile cheeseburger.

The updated New Mexico Green Chile Cheeseburger Trail celebrates 66 restaurants, drive-ins, diners, dives, joints, cafes, roadside stands and bowling alleys which serve the best green chile cheeseburgers in the universe. They come from tiny hamlets to burgeoning metropolises and from Abiquiu to Zuni and everywhere in between. One commonality among them all–aside from piquant deliciousness–is the exclusive use of green chile grown and roasted in the Land of Enchantment.

Please click on the image above to launch a larger, more interactive map. By hovering your cursor over each of the numbered burger icons, information about the green chile cheeseburger restaurant represented will display. For much more great information on the New Mexico Green Chile Cheeseburger Trail, please click here. While you’re on the New Mexico Department of Tourism’s Green Chile Cheeseburger Trail page, don’t forget to download a personal map you can take with you throughout your travels in the Land of Enchantment.

Note: I have added a “New Mexico Green Chile Cheeseburger Trail: 2011” category to the menu at right. Every restaurant on the Trail I have reviewed can be found in this category.