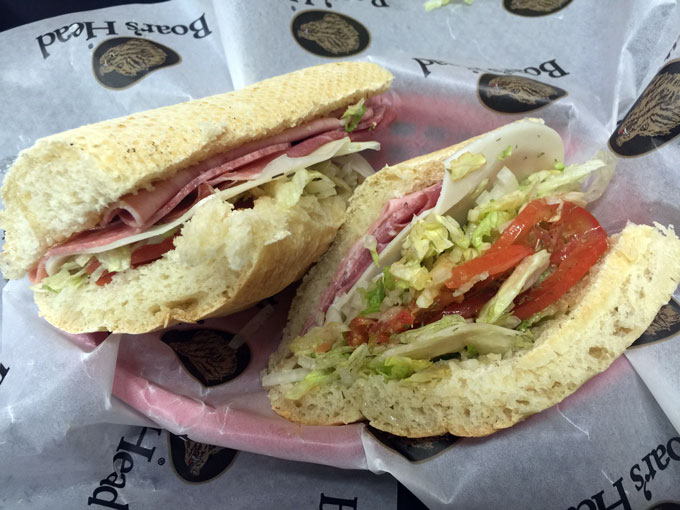 “There are sandwich shops in New York which offer the nobility and gentry
a choice of no less than 100 different sandwiches,
all of them alluring and some of them downright masterpieces.”
H.L. Mencken

In conversations with trusted gastronomes about what the Albuquerque area dining scene is most direly lacking, it’s not Basque cuisine, Russian food, Low-Country cooking or the food of any other race or ethnicity that’s most often mentioned. Surprisingly, what my esteemed colleagues believe is most desperately needed in the Duke City is a big city deli–and not just any kind of deli. My colleagues lament the absence of a true Kosher-style deli, the type of which were born in the Jewish enclaves of New York City in the 1930s. While the short-lived Nosh Jewish Delicatessen & Bakery quelled some of those longings, it still wasn’t the quintessential kosher deli my urban sophisticate colleagues wanted.

Kosher-style delis are not true practitioners of traditional Kosher dietary laws, meaning the food they produce is not deemed “fit” for consumption by Jews in accordance with standards for cleanliness, spotlessness and for being “intact.” As an example, Kosher practices forbid the consumption of meat and milk together while Kosher-style delis break taboos by offering such favorites as pastrami or corned beef (on real rye bread, of course) topped with cheese.

It’s not the “forbidden fruit” aspects my colleagues love about the Kosher-style deli (also known as a Jewish deli or New York deli). It’s the concept of “farshtopt” they (we) love. Farshtopt, a Yiddish word which means “stuffed” is an understatement. At many New York style delis, you can expect your sandwich to be over-stuffed, a skyscraper high behemoth with a pound or more of meats which are generally smoked and cured right on the premises by seasoned professionals who have been doing it for years. You can’t get meats like this from a franchised food service provider nor will you see a pound of meat on any sandwich at any Duke City diner or deli. Best of all, you can provision yourself with meats, cheeses, condiments and sundry deliciousness to take home.

We also love the dour disposition of the countermen who are as quick with their wit as they are with the knife. Some may call it attitude; we call it charm. Countermen expect you to understand the ordering process, to know what you want and to state it clearly and loudly. If you want your pastrami a little fatty (the way former New York City mayor Koch likes it), just let them know and they’ll serve it that way. That’s fatty as in with plenty of marbling for flavor. Your cardiologist might not like it that way, but you will.

We love the New York style delis which specialize in such old-world favorites as stuffed cabbage, matzoh ball soup, knishes, lox schmear, bagels, kippers and of course, pickles (which are made on the premises in plastic garbage bags). Frankly, there’s not much about a New York style deli we don’t like and miss. From an experiential perspective, there’s nothing like them and the food they proffer is incomparable. Not convinced? Rent When Harry Met Sally and fast-forward to Meg Ryan’s er…enthusiastic reaction to a meal at Katz’s Deli in New York City.

The hard-liners among my colleagues consider the word “deli” a misnomer for any so-called “deli” in New Mexico. Others use the word “travesty” to describe the use of the word “deli” on marquees in New Mexico. Most have conceded that New Mexico might never have a true New York style deli. That’s not necessarily bad. New York style delis generally don’t serve sandwiches with green chile. That’s one point–a huge one–you have to concede to New Mexico. Frankly, if you can overlook the fact that you might never have a farshtopt sandwich with house-made meats, you can find very good sandwiches in New Mexican “delis,” semantics not withstanding.

Founded in 1994, DG’s Deli is an Albuquerque lunchtime favorite for throngs–as in lines extending to the door to place their orders–of sandwich lovers. Between 11AM and 2PM, this converted grocery market is the haven and hang-out for hungry health care professionals from nearby hospitals, police officers, students and professors from the university, car dealers and just about anyone who craves the appetite-sating comfort of a good sandwich. During the lunch rush, DG’s receives such a high volume of calls for take-out orders that a busy signal is commonplace and if you don’t get a busy signal, you might be placed on hold for a while. Though DG’s has implemented an online ordering system, you still have to call to confirm your order.

That means you can have a sandwich selection unlike any in Albuquerque–31 cold sandwiches alone, including a build your own option. They’re available in four sizes: mini (six-inches), regular (eight-inches), large (nine-inches) and jumbo (ten-inches). A wide variety of condiments and dressings are available so you can have your sandwich your way. The menu also showcases sixteen hot sandwiches (not available in mini), eleven “Favorites” and four Vegetarian sandwiches. That’s more than sixty sandwiches alone, not counting daily specials. You can have your sandwich with your choice of sides: potato salad, macaroni salad, coleslaw, chips (eleven options) and pickles.

27 June 2011: A triumvirate of companions with whom I frequently dine consider the Green Chile Philly to be the be-all and end-all for sandwich sumptuousness in Albuquerque. Until its closure in 2017, the standard-bearers were Philly’s N Fries in Albuquerque and until it closed in 2011, Rocco’s Pizzeria in Rio Rancho. The former is beloved for its flavor and the latter for its size. The quest for a Green Chile Philly which matches Itsa for flavor and Rocco’s for sheer size wasn’t quite answered by DG’s Deli where its ten-inch sandwich is redolent with the flavor of sliced choice ribeye steak, mushrooms, onions, bell peppers, white American cheese and green chile. It’s a tasty sandwich with both piquancy, but not necessarily the size sandwich savants crave. White American cheese is an under-utilized, under-appreciated cheese which puts the flavor profile all together on this sandwich. It’s so good, however, that Sr. Plata, having consumed the ten-inch jumbo complained it was too small.

7 July 2011: As much as I personally love Green Chile Phillys, I wouldn’t be much of an essayist if I wrote solely about them. It takes willpower not to order one at every visit, but doing so would mean missing out on other good sandwiches–such as the meatball hoagie (meatballs, marinara sauce, provolone and Parmesan cheeses). This is a behemoth in which meatballs mean meat not some mystery meat-substitute filler. With meatballs in every bite and a sweet marinara sauce worthy of mama’s spaghetti and meatballs, DG’s rendition of a meatball hoagie is among the best in the Duke City.

12 November 2012: DG’s is a rarity in sandwich shops in that it offers both a tuna melt and a tuna salad sandwich. The tuna melt is for tuna aficionados who like the purity of unadorned tuna. Unlike so many tuna sandwiches, it isn’t slathered in an excess of mayonnaise. Nor is it served with a veritable salad of celery, onions and lettuce. This is tuna at its essence. In fact the only thing coming between the tuna and the bread is melted Swiss cheese, a fairly innocuous cheese that doesn’t get in the way of the tuna.

29 July 2016: If there’s one aspect of dining at DG’s that kosher deli aficionados don’t like, it’s that sandwiches aren’t at all farshtopt. In fact, the meat on some sandwiches is nearly as rare as a New York Giants win (of course, this could be said about almost all sandwich joints in Albuquerque). Case in point is the Italian Grinder (mortadella, prosciutto, salami, provolone, lettuce, tomato, onion, Italian dressing, oil and vinegar) in which the meats–a single, waifishly thin slice of each meat listed–are dwarfed by seemingly half-a-head of lettuce. Worse, the sandwich is virtually drenched in Italian dressing, making it the predominant flavor. Having partaken of dozens of overstuffed, meat-laden Italian grinders during my days in Massachusetts, comparisons are inevitable. Alas, DG’s Italian Grinder falls woefully understuffed.

14 November 2019:  The traditional New Orleans po-boy is a hot sandwich stuffed (that’s the operative word here) with seafood, fried chicken or shredded seasoned beef with a “debris” gravy.  Po-Boys tend to be very generously Bourre (French for “stuffed).  Espying a Cajun Roast Beef Sandwich (roast beef, green chile, Cajun spices, and pepper Jack) on the menu heightened my hopes for gravy running down my chin, excess roast beef spilling onto my plate, and the personality of such spices as cayenne pepper and paprika enlivening the sandwich and watering my eyes with joy.  My hopes were quickly dashed when a rather meager portion of roast beef barely extended beyond the bread.  Worse, the sandwich was rather “dry” with none of the gravy and very little of the assertiveness you find in true Cajun spices.  If you’ve ever had a roast beef sandwich in New Orleans, you’ll find this aspect of DG’s Deli’s “Cajun” roast beef sandwich especially disappointing.  The green chile is a nice touch Cajuns would probably enjoy, too.

DG’s Deli is a lively, jumping joint with something to see everywhere you turn. Walls are festooned with posters of movies, pin-up girls (including Bettie Page), bands and more. It doesn’t take long after you place your order for your name to be called to pick it up and ferry it back to your table as all eyes train lasciviously on the sandwich destined for your table.