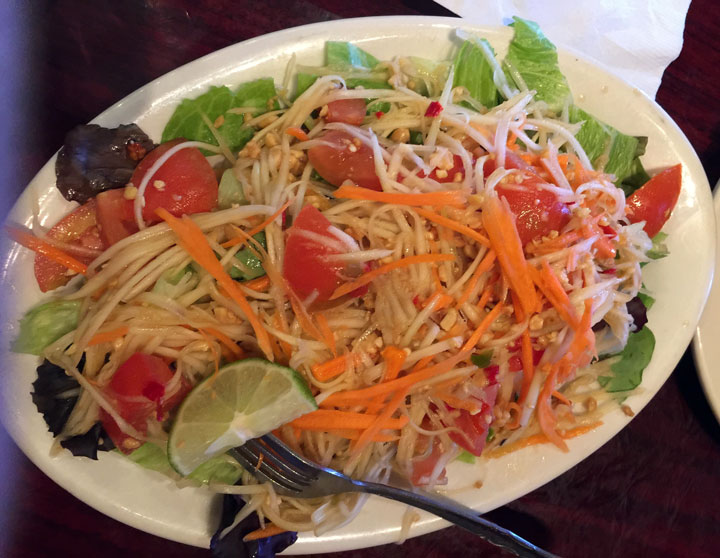 “What’s in a name? That which we call a rose
By any other name would smell as sweet.”
– William Shakespeare

Contrary to the Bard of Avon’s most famous sonnet, what something is named does matter. It matters at least as much as what it is. Some would say, in fact, that a name is everything. If a steak restaurant was named Rotted Meat, it’s unlikely it would entice enough diners (much less pedantic critics) to ever discover it serves four-star gourmet quality cuisine. Diners would stay away in droves and those intrepid enough to visit would likely find the suggestive nature of its name greatly diminishes the deliciousness of the food.

A restaurant’s name is its identity. The right name imprints a good and lasting impression on a restaurant’s customers. It’s an effective way to draw first-time visitors to a restaurant, if only to satisfy their curiosity. Choose the wrong name and your restaurant could be subjected to pejoratives and ridicule. Zagat’s, one of the most prolific print and online sources of user-generated restaurant reviews rounded up what they consider the worst restaurant names they could find — “silly, sexually suggestive, potty referencing and all.”

The list was comprised of Asselina, an Italian restaurant in New York; Beaver’s Choice, an Arizona Scandinavian eatery; Big Wong, a New York City Chinese institution; Crabby Dick’s, a Mid-Atlantic seafood chain; Crapitto’s, a Houston Italian diner; Fu King, a Chinese restaurant in Florida; Goat Lips, a Florida deli; 9021Pho, a Beverly Hills Vietnamese restaurant; Phat Phuc, a Vietnamese noodle Bar; and Pink Taco, a Las Vegas taco restaurant. It’s possible the double-entendre and scatology will appeal to the sophomoric among us–at least the first time we visit. After that, return visits are unlikely if the food isn’t up to par.

Rather than risk scaring potential customers away or worst, bringing in an “undesirable” crowd, most restaurant owners play it safe and give their restaurants fairly generic, but descriptive names that leave no doubt as to what type of food is proffered. Albuquerque’s Thai Vegan restaurant, for example, will never be mistaken for a restaurant which serves steak and chops. The name is clearly indicative of the type of food this restaurant serves. What the name doesn’t come close to describing is just how good Thai vegan food can be under capable hands.

At Vegan Thai, the capable hands belong to chef-owner Pat Phomnoi and they’re on display for all diners to admire in two Albuquerque locations–the original on Osuna and one in Nob Hill–and one in Santa Fe. It’s obvious from Thai Vegan’s “I love me” wall that the original restaurant’s success spawned the need for expansion. One section of the wall just as you walk in is plastered with all the “best of” accolades the restaurant has earned over the years from such publications as Albuquerque The Magazine, the Albuquerque Journal, The Daily Lobo and more. Not only has it earned honors as the city’s best vegan restaurants, but in recent years has also been recognized as the city’s best Thai restaurant.

That last honor–best Thai restaurant–places the emphasis on “Thai” cuisine, not “vegan” cuisine. My friend Larry McGoldrick, the professor with the perspicacious palate rates Thai Vegan as the third best Thai restaurant in the Duke City, right behind the Pad Thai Cafe and Thai Tip. When it comes to purity of flavors, Thai Vegan, he emphasizes, is spot on. After his inaugural visit, he returned to Thai Vegan four times in a two week span. I joined Larry and Dazzling Deanell on Larry’s fourth visit. He was excited to see if maybe a more recent visit to Thai Vegan might persuade me to up my rating from “20” to “22,” the rating he would accord the restaurant on my scale.

Chef Phomnoi launched Vegan Thai in 2010 at the former site of Lotus Cafe, quickly winning over the hearts of many of its predecessor’s devotees and bringing in the niche demographic of vegans wanting high-quality Thai cuisine. No matter your preference, Vegan Thai will win you over when you step into the restaurant and are immediately enveloped in the olfactory arousing aromas of spices and sauces. If you had any doubts before walking in, the fabulous fragrances will dispel them as they waft toward you like a sensuous siren’s call.

Thai Vegan will appeal to your visual sense as well. The attractive dining room is adorned in gold trim with a gold symbol resembling a seahorse particularly prominent. An aquarium teeming with goldfish seems strangely out of place though it does add to an already tranquil ambiance. Service is friendly, attentive and employs tandem concepts. The waitress who takes your order may not be the one to deliver it. Whichever waitress is closest to you at any given time will be the one to refill your drink order or check up on you.

The menu is very similar to that of many Thai restaurants with a few surprises thrown in. For example, the appetizers include not only edamame (soybean pods more commonly served in Japanese restaurants), but French fries, too. Perhaps because of the commonality of the pairing, the menu also lists eight burgers–tofu burgers, legume veggie burgers, soy burgers, wheat meat burgers and wheat and soy burgers, all of which you can have with fries. Many entrees are available with your choice of soy chicken, soy pepper steak or soy fish.

2 November 2017: Dumpling appetizers come six to an order or you can request an assortment of each of three types of dumplings: veggie, steam curry or red chili. The dumplings are decoratively plated on a bed of lettuce, julienned carrots and purple cabbage. The steam curry dumplings stand out largely because of the green curry sauce drizzled on top. The red chili dumplings have a crispy texture as if deep-fried. The red chili is more cloying than it is piquant. One of this appetizer’s best qualities is that when you’re done with the dumplings, you still have a salad well sauced with green curry and red chili.

2 November 2017: The menu offers eight different salad options including larb (the national dish of Laos) and papaya salad. The papaya salad is as beautiful to behold as it is a joy to eat. A bed of lettuce is crowned with julienned papaya and carrots, minced peanuts, cilantro and purple cabbage flanked by tomatoes. Ordered at medium piquancy, there is barely a discernible hint of heat (at least to fire-eaters like Larry and me) on an otherwise very tasty, very fresh papaya salad. Papaya salad is one of the most fresh and vibrant dishes on a Thai menu. Even if newcomers don’t like anything else about Thai food, they’ll probably enjoy papaya salad.

30 July 2011:My server looked at me as if I had a death wish when I requested green curry at a “Thai hot” level, prompting me to question my own sanity. I shouldn’t have. The heat level was innocuous–maybe a third as piquant as the incendiary heat generated at Thai Cuisine. That’s too bad because a little heat would have elevated the flavor profile of a pretty good green curry. Even my Chicago born-and-bred better half thought the heat level to have been strictly “gringo.” Stricken by a desire to experiment, I asked for the curry to be prepared with the soy pepper steak which will never be mistaken for the real thing, but shouldn’t be discounted either.

5 May 2015: Thai Vegan’s daily lunch and dinner combinations are a bargain at under ten dollars. Both are served with steamed brown rice, a spring roll and salad with your choice of tofu, soy chicken, pepper steak or soy fish. For a pittance more, you can also have soy shrimp or soy chicken nuggets. If the curiously named Praram’s Plate (marinated soy chicken pan-fried with peanut sauce on a bed of steamed spinach) is any indication, these combination plates are special. The pan-fried soy chicken may not perfectly mimic the taste and texture of real white meat chicken, but it’s close enough to the real thing that not everyone will notice. The tofu chicken is drenched with a peanut sauce very much reminiscent of the peanut sauce often served with satay. For those of us who love peanut sauce, the profligate portion of sauce is very much welcome. The spinach also goes well with the peanut sauce. As Thai spring rolls tend to be, the spring roll is excellent.

30 July 2011: Our mangoes with sticky rice dessert was a bit of a let-down. Though the mangoes were in-season, fresh and juicy and the sticky rice was perfectly prepared, this simple but elegant dessert favorite lacked coconut milk, the ingredient which coalesces all flavors in this dish.

So, what’s in a name? In the name Thai Vegan, there’s the promise of very good and very healthy Thai food prepared before your eyes in a very attractive milieu.