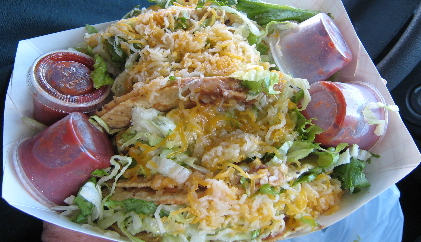 Back in my halcyon youth as a multi-sport athlete at Peñasco High School (when I could consume half a million calories a meal at no detriment to my then svelte physique), Dandy Burger in beautiful downtown Española was a frequent dining destination–particularly after the then “not so mighty” Peñasco Panthers suffered a loss (and there were many of them).

On the rare occasion in which we actually won a game, our coaches would “treat us” to chicken fried steak at some “fancy” restaurant. We didn’t have the heart to tell them we preferred Dandy Burger.  Frankly, I still do.  It’s hard to resist stopping for a green chile cheeseburger and a bit of nostalgia every time we drive through Española.

The food at Dandy Burger was never quite good enough to lessen the pain of a loss then and is even less capable of doing so today when the losses I experience are more costly (as in a poor performing 401K…or is that now 4.1K). Still, I always have a contented sense of nostalgia when I see the familiar anthropomorphic burger that symbolizes this popular neighborhood hangout.

Dandy Burger’s “mascot” is a cartoonish, tuxedo- and top hat-wearing, cane-wielding, burger-headed anthropomorph resembling Jeeves the butler on the restaurant’s signage. The burger’s entire countenance (resembling the ubiquitous smiley face) occupies the top half of the bun. It’ll put a smile on your face, especially if it portends a meal.

Most of those memories are of the standard “Dandy Burger” or the more prodigious “Big Jim Dandy” with double meat, two very good burgers, particularly if ameliorated with green chile. These burgers are dressed with unfailingly crisp onion, lettuce, pickle and mustard but you can pretty much have them any way you want. The meat patties are obviously not hand-formed and fresh ground, but they’re charbroiled to perfection–especially if you like your burger well done.

The green chile is neon green and only of medium piquancy. All other ingredients are fresh and delicious though at times I’ve wished for salad dressing, so profuse is the lettuce on each burger.  If you want piquancy on your burger, ask for a couple of plastic tubs of salsa.  Dandy Burger’s salsa is the most piquant item offered by the restaurant.  It’ll enliven your burger.

Rio Arriba county, and in particular Española, are home to some of the best green chile cheeseburgers in New Mexico. Dandy Burger’s offerings compete with both the Stop and Eat burgers less than a quarter mile away or the LotaBurger about a mile north. All three can quell hunger far better than the Peñasco Panthers defense of days gone by could stymie their opponents.

Even better than Dandy Burger’s burgers are the standard hard-shelled tacos, sloppy (cheese, lettuce, chopped tomato) concoctions which include a beans and meat mixture with a piquant bite. You don’t necessarily need the plastic tubs of hot sauce to heat up these beauties; they’ve got some bite on their own. My Kim has long contended that these tacos are among the very best in Rio Arriba county.

Chicharrones are one of the favorite “condiments” in Northern New Mexico where these pork crackling cubes are used on almost everything but dessert.  They’re especially good on burritos.  Perhaps nowhere in the Land of Enchantment will you find a burrito quite as engorged with chicharrones as at Dandy Burger where each tortilla encased treasure is packed with them.  Alas, some of the chicharrones are more fatty than they are meaty, but that’s pretty much par for the course.

3 November 2019:  Several sources credit Texas for having “invented” the taco salad, one source calling it “a fusion of the Mexican taco with the American salad.” Although creators of the first taco salads probably omitted the ubiquitous taco shell, eventually someone figured out the taco salad could be made even better by fashioning a “bowl” from a tortilla shell.  That’s the way Dandy Burger serves its taco salad.  As a serving vessel, the tortilla bowl does its job well, holding in a plethora of ingredients (pinto beans, shredded cheese, lettuce, chopped tomatoes, hamburger meat).  Though you can break off and eat portions of the bowl, my preference would be for separate tortilla chips.  Still, this is a filling and fulfilling taco salad.

Dandy Burger’s shakes are always cold, a wonderful blessing on a sweltering summer day when Española’s pavement is baking everything on the road.