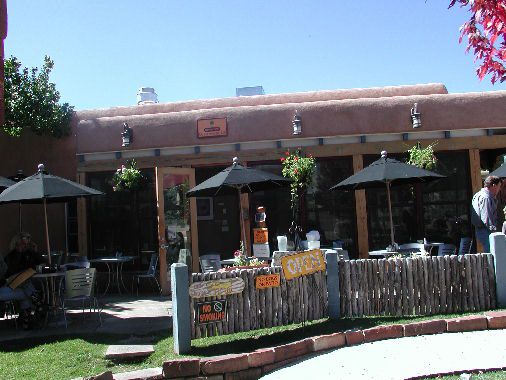 Whether bathed by the sunshine of a dazzling daytime sun or illuminated by the shimmering glow of a starry moonlit night, the 360 degree views from the village of Arroyo Seco are enticing enough to convince any weary sojourner, wandering vagabond or peripatetic gypsy to end their nomadic ways and settle down.

Your vantage points to the immediate north and distant south include sacred snow capped Tiwa mountains reaching majestically for New Mexico’s incomparable cobalt skies. Verdant fields present a dramatic east facing panorama while prominent vast expanses of stark terrain seem to go on forever on your western perspective. It’s truly an idyllic setting for a gastronomic paradise in which creative ingredients play a mellifluous tune on your taste buds.

The menu is worldly sophistication and eclectic with several Asiatic appetizers and entrees holding court. We tried several of them and came away impressed. Thai beef lettuce wraps featuring grilled and marinated beef sautéed with red onion nested in cool lettuce leafs are garnished with cilantro and peanuts then served with a Vietnamese sweet and sour dipping sauce. They are messy but magnificent.

Nowadays it seems every restaurant serves sushi (usually of inferior quality) and Gypsy 360 is no exception, but the difference being Gypsy 360 does it very well. A spicy tuna roll masterfully crafted with fresh ahi tuna, jalapeno, pickled burdock root, scallion and secret sauce tasted as if it had been made by a trained sushi chef.

Thai green curry is burnished with rich and herbaceous coconut milk curry laden with pork, tomatoes and spinach over basmati rice. It was as fiery as any curry you’ll find at any Duke City Thai restaurant, but my preference would be for sticky white rice, not basmati.

A wonderful alternative to Pan Asian cuisine is the “Superior Burger” which truly earns its sobriquet. It is easily one of the top five or six burgers in New Mexico and a burger for which you need several napkins, so succulent is it. This carnivores’ classic is a half-pound black angus burger dressed with a thick and lightly grilled onion slice, crisp bacon and jack cheese on a grilled bun with piquant chipotle mayo. It is possible to improve on superiority by asking for green chile and substituting jack cheese with a sharp blue cheese. Your breath may reek afterwards, but your taste buds and stomach will thank you.

If you’re not in the mood for a burger, an excellent sandwich board is available. Gypsy 360’s version of the Cuban sandwich is called the Havana Hero, a sandwich for which you’d swim the Caribbean. It’s a humongous pressed French roll generously endowed with roasted pork loin, black forest ham, jack cheese, mashed black beans and avocado.

Antecedents for an outstanding meal should include salsa fresca and tostaditas. This jalapeno salsa packs a punch with fresh ingredients that include cilantro, garlic, tomatoes and lime juice. It is a premier salsa, one of the best in Northern New Mexico. Another wonderful appetizer choice is the hummus plate which includes a munificent scoop of ceci bean hummus, olives and a piquant salsa verde with warm, flat pita bread. The garlic laden hummus is more than noteworthy.

By itself, the incomparable vistas make it worth a visit to Gypsy 360. When you visit northern New Mexico on a clement spring or even early fall day, you might be surprised at how thirsty you quickly become. A perfect cure is the Gypsy 360’s lemonade, which ranks with Gabriel’s as perhaps the best in the state.