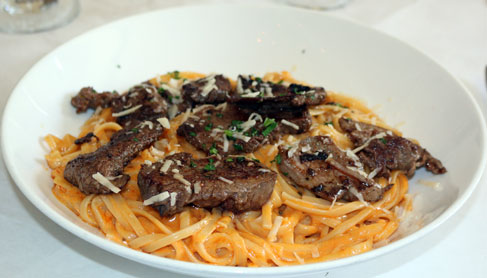 New Mexico is truly a dichotomous land, a state in which seemingly contrasting qualities exist in symbiotic harmony with each other. While most of those contrasts exist spectacularly in nature, the Land of Enchantment’s architecture is no stranger to contradictions. One such example is the Luna Mansion, a stately manor built in the Southern Colonial architectural style, but whose basic construction material is adobe. The Luna Mansion was built in 1880 by the Santa Fe Railroad Company in exchange for right-of-way through lands owned by the Luna family. In the 1920s, the Luna-Otero family added to the grandeur of the Los Lunas showcase by building a front portico and grand solarium. White Grecian columns bid all visitors welcome.

In the 1970s, the Luna Mansion was transformed into a restaurant, perhaps rankling the ire of Josefita Otero, one of the original family members to dwell in the Mansion. Her apparition, attired in 1920s regalia, began to appear. Several other apparitions, including Cruz, a groundskeeper, are said to haunt the restaurant while others have been seen or felt on the grounds of the estate. Perhaps they continue to visit the Luna Mansion for the food.

While Auld Lang Syne faded with the dawning of 2009, the Luna Mansion was put up for sale by Earl Whittemore who had owned the property for more than three decades. It wasn’t for sale for long. Fittingly, the Mansion was purchased by Pete and Hortencia Torres, longtime owners of the Wittwer House, another historic property converted to a restaurant (the award-winning Teofilo’s Restaurante). Moreover, the Torres family has a restaurant pedigree in Valencia County that goes back more than six decades. Pete’s parents opened the eponymous Pete’s Cafe in 1948. Teofilo’s is directly across Main Street from the Luna Mansion, now a registered national historic landmark.

Under the auspices of the Torres family, the Luna Mansion remains a monument to the way good food used to be served in bygone days before America became a fast food nation, back when hearty portions of delicious cuisine could be enjoyed in a relaxing milieu. Though not by design, the restaurant brings to mind the clean, elegant Harvey House restaurants which introduced a touch of refinement and civility to an untamed frontier while serving good food at reasonable prices throughout the Old West. There’s a Harvey House a few miles south in Belen though it no longer serves food.

The Luna Mansion name is now appended by “Landmark Steakhouse,” a recognition of its historic place in the community as well as the Torres family commitment to providing a memorable fine dining experience for their patrons. As the name implies, the specialty of the house is USDA prime beef aged 21 days for flavor and tenderness and hand-carved by local butchers exclusively for the Luna Mansion. The menu also offers fresh fish, seafood and poultry. Several menu items popularized during the tenure of previous owners have been retained (including one of my favorite desserts) while New Mexican chile inspired items no longer have a place on the daily menu.

The nattily attired and attentive Luna Mansion wait staff is as energetic as any in the Duke City area, but with a small town neighborliness you don’t often find in the big city. They’ll be happy to engage you in small talk or discuss the history of the Mansion if you wish, but they’re also professional enough to leave you alone if that be your preference. Best of all, they’re always on-the-spot with hard-crusted sourdough bread and soft butter as well as ice water or your beverage of choice. The sourdough isn’t baked on the premises, but it’s served warm and is replenished faithfully.

This appetizer menu includes some traditional (some might say anachronistic) steakhouse starters such as shrimp cocktail, Oysters Rockefeller and calamari, but throws in shrimp wontons as a surprising change of pace. These wontons aren’t your typical desiccated dumplings fried to a crackling, crunchy and empty shell. These are roughly the size of a beverage coaster and stuffed with a generous bounty of cream cheese, green onion and shrimp. Best of all, they’re served with a jalapeño sweet and sour sauce that packs a punch. The calamari are small ringlets of squid goodness–not too chewy or too thickly coated. The accompanying cocktail sauce is packed with a potent horseradish.

31 May 2012: The menu also offers a Maytag Wedge constructed from crisp iceberg lettuce layered with bleu cheese dressing, crumbled Maytag bleu (sic) cheese, chopped tomato and crisp bacon. As a bleu (or blue) cheese aficionado who routinely asks servers to bring me as much bleu cheese as they can carry, it does my heart good (only figuratively) to see the generous dollops of my favorite salad dressing. Maytag blue cheese has been hand-formed and cave-aged since 1941 and is one of the most flavorful of all bleu (or blue) cheeses. The other salad components are quite good, but it’s the pungent cheese that stars here.

You might not consider Los Lunas (or anywhere in landlocked New Mexico) a destination for seafood, but the Luna Mansion might just change your mind. Daily offerings include two lobster tails, tipping the scales at about a pound, at market price. There’s also a pound or pound and a half of sweet, juicy Alaskan King Crab also at market price. A long-time restaurant favorite is the Mansion Steak, a six ounce filet smothered by crab meat and Béarnaise sauce. Both the filet and the crab are good in their own right, but don’t necessarily combine all their best qualities when paired together.

31 May 2012: The purity of beefy deliciousness is best exemplified by the 24-ounce Porterhouse steak, as good a prime cut of beef as we’ve had in the Albuquerque area. It is prepared to your exacting specifications (at medium, it’s got that pinkish center that ensures juiciness and flavor) and is seasoned with exactly the right amount of sea salt, pepper and garlic. This beauteous beef has marbling for flavor, but not much of the excess fat you cut out and leave on your plate. As with other entrees, steaks are accompanied by your choice of potato (a fully loaded baked potato, French fries or whipped Yukon Gold potatoes). The baked potato is perfectly cooked all the way through and is roughly the size of a child’s football.

31 May 2012: Another spectacular plate features four lollipop (what lamb rib chops are called when they’re “Frenched” (when the meat is cut away from the end of a rib or chop, so that part of the bone is exposed)) lamb chops served with mint sauce. Lamb chops essentially come with a built-in “handle” which makes them easy to pick up and eat (yes, even at a fine dining restaurant). Each lamb chop is pert and petite, but it’s packed with flavor and is very tender. When asked the degree of “doneness” for your chops, it’s best to leave it to the chef’s discretion. Most chefs prepare lamb chops by broiling, grilling or pan-searing them for only a few minutes on each side. At medium, the Luna Mansion lamb chops are moist and delicious.

19 July 2015: The Luna Mansion set the bar very high, hosting the inaugural brunch venture for the discerning and culinary savvy Friends of Gil (FOG). Ten of us convened at the historical gem to enjoy a sumptuous repast that included a prime rib breakfast burrito. Engorged with scrambled eggs and grilled prime rib topped with red chile, it’s a Cadillac of breakfast burritos in a neighborhood of Chevys. This burrito was served with French fries, a surprising departure from the usual hash browns.

The menu offers several “sides including creamed spinach, steamed asparagus, sauteed garlic spinach, whipped Yukon Gold potatoes, sauteed mushrooms, baked potato and French fries. The creamed spinach is a winner thanks to the infusion of intensely garlicky heavy cream playing off the natural acerbic qualities of the spinach. The cream is a bit on the watery side, but is good enough to sop up with the restaurant’s sourdough bread.

19 July 2015: It’s not every brunch that allows guests to also select from the dinner menu. The only concession at Luna Mansion is that baked potatoes aren’t available until after five. If you’re having the pasta, you don’t need another carb anyway. You might not even miss out on the Mansion’s magnificent meats. That is if the fettuccine with a red chile cream sauce and sirloin tips is on the menu. First, the pasta is perfectly prepared if your ideal is neither mushy nor al dente. The red chile cream sauce is rich and delicious with just enough piquancy to be discernible, but not so much that it tastes like another New Mexican dish showcasing our enchanting chile (great as it is). The sirloin tips are a highlight, a reminder that the Luna Mansion serves some of the very best steak in the area.

31 May 2012: Only three desserts–the Mansion Mud Pie, classic cheesecake and housemade key lime pie–grace the menu, but savvy diners look no further than the Mansion Mud Pie, one of my favorite desserts in the area. The foundation for the pie is a thick Oreo crust which is topped with about two inches of mocha flavored ice cream, a chocolate ganache and whipped cream garnished with almond slivers. This is a pie for the ages, a pie I might haunt the Luna Mansion for someday.

The Luna Mansion has long been one of Valencia county’s culinary crown jewels, but it’s good enough to warrant mention among the most highly regarded fine dining establishments in the metropolitan Duke City area.