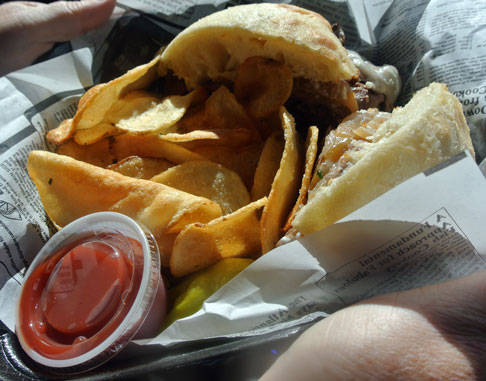 Hamburgers have long been the apotheosis of comfort food deliciousness and the favorite food of the masses. Regardless of socioeconomic strata, burgers are enjoyed by nearly one and all–to the tune of some 38 billion per year in the United States alone. That’s three per week on average for every man, woman and child. Add in the burger consumption outside the fruited plain and burgers are in rarefied company, placing them among the most popular food phenomenon in the entire world.

Culinary experts will tell you the reason for the popularity of burgers can be attributed to three factors: simplicity, convenience and diversity (there’s no limit to how you can dress a burger, if you choose to dress it at all). Shouldn’t great taste factor in there somewhere? Apparently we don’t love burgers because they taste great? What about cost? Burgers have traditionally been a relatively inexpensive food affordable to most diners.

As the downtrodden economy seems to have shown, burgers might truly be “recession proof.” Though Americans may deny themselves many of life’s other luxuries, we won’t give up (or cut down on) our burgers. Nor will we settle on cheap, inferior burgers. The burgers which have made the most significant inroads in the 100 billion dollar a year burger market are the pricier, premium patties and their sundry upscale ingredients. It’s what carnivorous Americans crave.

In Socorro county, two eateries–the Owl Cafe and the Buckhorn Tavern–have had the burger market cornered for generations. While the Owl Cafe and the Buckhorn Tavern have established reputations across the fruited plain for their no-frills but extremely high quality and thoroughly delicious burger offerings, the Bodega Burger Co. & Lounge which launched in 2011 is giving Socorro area diners an alternative burger with no compromise in quality or deliciousness.

Calling itself an “upscale burger joint,” a seeming contradiction in terms, the Bodega Burger Co. is taking a gourmet twist approach to its burgers, serving an impressive array of unique specialty burgers all crafted with New Mexico Angus beef. Perhaps the most unique is the Green Egg and Ham burger made with green chile, fried egg and bacon with chorizo con queso on a brioche bun. The burger line-up also includes three non-beef burgers–black bean veggie burger, smoked salmon burger and crispy shrimp burger–in addition to a low-carb burger on which a large portobello mushroom cap takes the place of a conventional bun.

If you’re the mad scientist type who likes to experiment with unique ingredient combinations, the Bodega’s “create your own burger” option truly lets you “have it your way.” You can choose your patty, bun, sauce, cheese and toppings. All burgers come with lettuce, tomatoes, onion and pickle as well as your choice of fries, side salad or one of the menu’s sides (which include two rolled-up enchiladas). There are four fries options, too: shoestring fries, fat fries, buttermilk zucchini fries and sweet potato waffle fries. If you’re not in the mood for burgers, sandwich options are plentiful.

15 June 2012: The restaurant’s signature burger is the eponymous Bodega Burger (American cheese, smoked bacon and green chile). It becomes immediately obvious why a brioche bun is used instead of a conventional burger bun. This is one juicy burger, emphasis on moist in a very good way. The patty is a well seasoned and thoroughly delicious slab of New Mexico beef. The locally grown green chile isn’t especially piquant, but it has a nice roasted flavor that complements the smoked bacon especially well.

15 June 2012: The featured burger special during our inaugural visit was the Mountain Man Burger, a blend of venison, buffalo, wild boar, antelope and elk topped with barbecue sauce, smoked jalapeños, Cheddar cheese, tomato and lettuce. The lean, full-flavored meat blend is unique in New Mexico and not something I thought would be especially flavorful considering the heavy lean to fat ratio, but this turned out to be a very good burger even though the smoked jalapeños and barbecue sauce may have detracted from the flavor of the beef just a bit. It’s a burger that deserves a permanent place on the menu.

28 September 2014: Perhaps even better than the aforementioned burgers is the Bodega’s Prime Rib Sandwich, thinly-slices steak topped with Provolone, caramelized onions and creamy horseradish served on a Ciabbata roll with au jus. The combination of eye-watering creamy horseradish and sweet caramelized onions complement the whisper-thin steak and salty Provolone perfectly. The au jus is formidable enough to allow liberal dipping into the au jus, a thin, meaty broth with great flavor.

Bodega, a Spanish word for wine shop, lives up to its name with offerings you don’t have to be an oenophile to appreciate. New Mexico wineries–St. Clair, Lescombes, Black Mesa and Gruet–are showcased, but wines from France, Chile, Australia and California are also available in such varieties as reds, whites, sparkling to dessert wines.

If your inclination is to turn your nose up at the prospect of or to be skeptical about burger and wine pairings, you need not be. Food & Wine advises that the type of meat determines the best wine match (unless the burger is smothered in strong-flavored condiments). Don’t fret if you’re still not sold on burger and wine pairings. Bodega’s menu is no one-trick pony. In fact, it’s got one of the most delightfully diverse menus you’ll find in the Socorro area, comparable in diversity to that of the Socorro Springs Brewing Company.

Tapas, soups and salads occupy the first page of the menu. The tapas are an array of the type of starters popular throughout the Land of Enchantment, some with a gourmet twist: smoked salmon quesadilla, buffalo-lime chicken wings, cheese steak empanadas. Your soup soiree can consist of either lobster bisque or a soup-of-the-day. Salads range from the inventive (prickly pear) to the classic Caesar and a garden salad.

28 September 2014: The Smoked Salmon Quesadilla (caramelized onions, chipotle peppers, Jack cheese inside a grilled tortilla) is one of the more intriguing of the available tapas. Alas, the penurious amount of salmon (guppy-sized) and the crispiness of the quesadilla make this sandwich more reminiscent of the “cheese crisps” which are so popular in Arizona’s Mexican restaurants. The very best quesadillas aren’t necessarily engorged with fillings, but what they’re stuffed with is more plentiful than we found on this smoked salmon quesadilla. The accompanying salsa was quite good with a nice level of piquancy to it.

Upscale applies to the dinner menu, (served after 4PM) too. Steaks, fish, chicken and chops are featured fare for dinner, all reasonably priced. It especially does my heart good to see another restaurant serving fried chicken. The Bodega’s rendition is flour-dusted, pan seared poultry with a creamy pecan sauce. Steak options include prime rib, a boneless ribeye, aged New York strip and Angus Filet Mignon.

In May, 2012, Travel & Leisure magazine rated America’s best burger cities. As is often the case, the list included mostly medium to large population centers which offer a large variety of burger options. Had the burger rating been based on burger greatness per capita, Socorro county might have well been in the mix, especially now with the addition of the Bodega Burger Co. & Lounge.