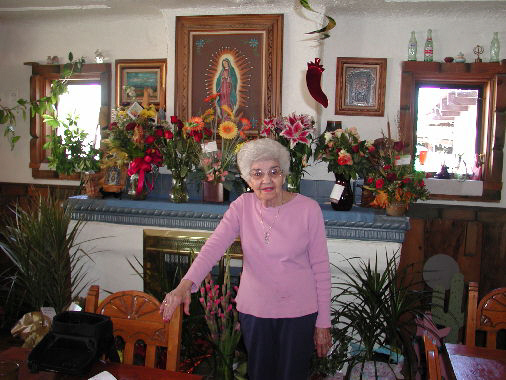 In Asi Es Nuevo Mexico, the official state song of New Mexico, former Lieutenant Governor Roberto Mondragon extols in a rich timbre, the incomparably beauteous flowers of The Land of Enchantment–its women. When the verse “lindas mujeras que no tiene igual” (beautiful women without equal) was written, the composer must certainly have had Matilda Guillen in mind.

At 81 years young, there is no surcease to Matilda’s boundless energy. She has owned and operated her eponymous restaurant for fifty years and has no plans to retire. On Sunday, September 24th, 2006, throngs of friends, family and admirers gathered together to celebrate her 81st birthday. Surrounded by hundreds of people who know and love her, she was practically showered in flowers, all of which paled in comparison to her inner and outer beauty.

Although we had known about her and her restaurant for years, we met Matilda just five days after she had been feted by her family and friends. She was still aglow in happiness and basking in the presence of the flowers and family which remained behind. Though we had never met her before, she treated us the way she treats all her customers–like old friends. She is obviously very well rooted with nary a sense of worry or fret.

Matilda spoke to us of the past when she charged five cents for a cup of coffee and twenty-five cents for a big bowl of chile, but mostly she talked of the promise of the future. An eternal optimist, she hopes and plans to continue greeting and serving her customers for a long time to come. She also spoke lovingly of her family which includes long-time Democrat power-broker Ben Lujan.

There’s no way the cavalcade of cars that daily traverse the state highway which bisects Espanola can miss Matilda’s Restaurant which is just off the beaten path on a dirt alley. A large well-lit sign points the way to what is a humble, homey restaurant everyone in Northern New Mexico knows about. In many ways, her restaurant resembles the former family home it once was. Catholic icons and family pictures decorate every wall while the porch leading to the restaurant’s entrance is decorated with potted geraniums and other perennials.

The menu, on which the faces of a Native American and a Conquistador are depicted, is replete with native Northern New Mexican foods. With the exception of the tacos platter, all dinners are served with your choice of red or green chile and sopaipillas. The green chile is reputed to be among the very best in the state while the posole most assuredly is.

A steaming bowl of posole, ameliorated with chunks of tender pork, with green chile is a must have. Posole is a New Mexico comfort food standard traditionally served at Christmas time (but wonderful year round) and there is none better than Matilda’s version. As hearty and heart-warming as can be, it is made even better with fluffy, golden-brown sopaipillas which Matilda herself replenishes faithfully. Oh, and you can also have those sopaipillas with a locally produced honey which is far superior to the store-bought kind other restaurants serve.

Matilda’s salsa is a rich red blend and in texture resembles a thickened tomato paste, but it packs a piquant punch that sneaks up on you. A bowlful before your meal is a must though you might want to save some for your entree. The salsa is served with a basket of crisp, low-salt chips.

Enchiladas have become the quintessential New Mexican entree and Matilda’s are among the best of their genre. Served either rolled or flat (my preference) and with the requisite fried egg on top, there may be nothing that tastes more like New Mexico. Cheese and onion may embellish the enchilada, but there’s no doubting that these enchiladas are about the chile–the way it should be–even though Matilda’s green chile could be a tad more piquant. The pinto beans are served whole, not refried and mashed, also the way it should be.

Also as they should be are Matilda’s tacos which are loaded with perfectly seasoned beef and shredded cheese and served in the un-Taco Bell manner on uneven shells dipped in boiling grease. If some of that grease gets on your hands as you eat your tacos, that’s the way it should be.

Matilda’s has been going strong for fifty years. That, too, is the way it should be!