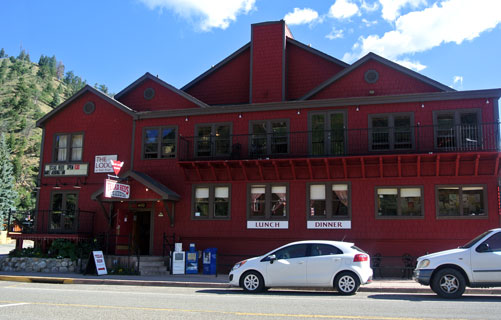 Note: On Wednesday, November 3rd, 2004 Texas Reds burnt to the ground, but like a Phoenix, it has been rebuilt, albeit no longer as a two story monolith on Red River’s main street. In 2006, Texas Red’s also launched a second Colfax county restaurant, this one in Eagle Nest.

What does the alpine village of Red River in the picturesque Moreno Valley have in common with San Marcos, Texas, the beautiful gateway to the Texas Hill Country? Aside from both being heavily populated by Texans, they both can boast of a Texas Reds restaurant.

The original Texas Reds has been a Red River dining destination serving generous portions of friendly service and old west ambience since Thanksgiving, 1967. With an overdone touristy atmosphere that includes checkerboard tablecloths, wooden planked floors and the perfunctory peanuts you can toss on the floor, Texas Reds is a carnivore’s paradise. Its old west saloon is at ground level while the dining rooms are upstairs.

While it’s true that dining at nearly 9,000 feet makes the food seem to taste better and your appetite more robust, it’s also true that Texas Reds proffers one of the very best steaks in New Mexico. Charbroiled in butter, the porterhouse is 18 ounces plus of perfectly seasoned meat which seems to have addictive properties. It’s so good, you’re challenged to partake of the “odds ‘n’ ends” that accompany your meal. Even better is the nearly inch thick New York strip steak. Almost tender enough to cut with a fork alone, it’s one of the best slabs of beef you can find anywhere. For steak alone, Texas Reds is one of the two or three best restaurants in the Land of Enchantment.

The dinner salads are bountiful and creative, but are especially delicious when bathed in Texas Reds salad dressing or the blue cheese dressing rich with crumbles. Unfortunately, the baked potato is nearly as ordinary as the steaks are spectacular. Worse yet, you have to fully dress your potato (chives, sour cream, butter, bacon bits) yourself out of packaged ingredients. For dessert, a brownie sundae is ample enough for two to share, but after consuming a steak, you’ll have to loosen your belt at least two more loops.

Texas Reds, like Red River itself, is an experience!