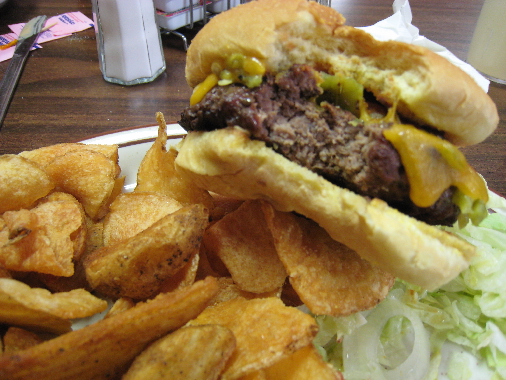 Arguably the very best programming all year long on KNME, Albuquerque’s Public Broadcasting Station (PBS) comes during its four annual fund-raising campaigns.  For sandwich lovers all over New Mexico, no PBS feature is more greatly appreciated than Sandwiches That You Will Like, a documentary by Rick Sebak of television station WQED in Pittsburgh, Pennsylvania. The documentary showcases unique sandwich offerings from throughout America.

Voracious viewers like me practically salivate at the scrumptious sandwiches on display and lament the fact that most of them can’t be found within the borders of the Land of Enchantment. Watching the documentary is torture of the most delicious sort, no doubt prompting a rush to the refrigerator for even the least tortured among us.  One of the sandwiches featured, a staple in the Buffalo, New York area, is called a “Beef on Weck.” Weck is a colloquial diminutive of Kummelweck, a salty roll topped with pretzel salt and caraway seeds.

The first time I passed by an Albuquerque restaurant named “Wecks,” the sandwich fanatic in me hoped against hope, the menu would showcase the fabulous Beef on Weck sandwich, but it wasn’t meant to be. The name Weck’s is a shortened form of the original owner’s last name, Weckerly.  Doug Weckerly launched the restaurant in 1991 and opened two other Weck’s in the Albuquerque metropolitan area before selling the local chain in 2004 to local restaurateur Art Kaplan and his wife Toya. Today there are six Weck’s restaurants in Albuquerque, one in Rio Rancho, one in Los Lunas and one in Santa Fe.

The restaurant’s motto is “A full bellied tradition since 1991.” Rarely have truer words been uttered. Weck’s is renown for serving titanic portions. Weck’s mission statement reads in part: “We will consistently serve our community great tasting foods, promptly and politely. We will greet all our customers with a smile and provide them with courteous service in a clean and orderly environment. We will do this with the knowledge that if we take care of business today, we will build business for tomorrow.”  While many mission statements, particularly in the corporate world, seem to be just so many words on paper, Weck’s lives up to its.  The wait staff is attentive and rarely does a visit go by without a visit from the manager on duty ensuring on your comfort and satisfaction.

Humongous portions and a customer orientation that’s much more than lip service are but two of the reasons Weck’s is a family favorite. Other reasons include good value for your money and some genuinely wonderful menu items.  Weck’s serves only breakfast and lunch and you’ll sometimes experience short waits as faithful patrons finish the platters of food gracing their tables. More often than not they leave the restaurant hefting dinner in doggie bags the size of shopping bags.

Breakfast is served all day long and in full bellied tradition may fill you up for the entire day. Pancakes are the size of car tires, an order of papas (hash browns with your choice of red and/or green chile, Cheddar and Jack cheeses and two eggs any style) is mountainous and omelets are made with four eggs.You could feed a developing nation on lunch portions from a menu that includes big sandwiches, belly busting burgers, really big salads (where are you now Elaine Benes) and substantially portioned New Mexican food.

Burgers and sandwiches are served with your choice of two sides, among the most popular being the fresh, homemade potato chips and unique crinkle wedge fries. Two sides means prodigious portions of each–sides which dwarf any competitor’s offerings. The potato chips can be terrific if not left too long on the fryer. They’re slightly thicker than the bagged chips which all too easily crumble into annoying little pieces. The chips are also relatively lightly salted. The crinkled wedge fries are Texas sized and delicious.  Other sides options include gourmet onion rings, fresh fruit, cottage cheese.  You can also substitute a small salad or bowl of soup for the two sides

The mound of tortilla chips Weck’s serves with its salsa are also homemade, unfailingly fresh and lightly salted. The salsa is jalapeno based and slightly reminiscent of Pace Picante Sauce without the acerbic aftertaste. This chunky salsa is mild on the piquant scale but that doesn’t detract from a pleasant flavor.  Weck’s guacamole is also quite good. Constructed from fresh avocados, it has a distinct hint of lime which some of the best guacamoles use for flavor (and to keep guacamole from browning too soon with exposure to the air).

The green chile cheeseburger is a handful with a beef patty easily exceeding eight ounces (twice the size of the Quarter Pounder). I’ve always asked for my burger to be prepared at medium rare–and rarely have my exacting specifications been met. Burgers typically seem to be served at medium or medium well.  The green chile could use some wildness as it is tame even by “gringo” standards. Melted Cheddar cheese and a slightly toasted bun are the burger’s saving graces.

Although Weck’s doesn’t feature the Beef on Weck, it does serve several very good, very big sandwiches. In fact, Weck’s sandwiches–all ten of them–are my favorite reason to visit. My current favorite is the “Different Philly:” roast beef, sauteed mushrooms, onions, bell pepper and mozzarella cheese on griddled sourdough.  By no stretch of the imagine will this rendition of the “Philly” remind anyone of, say, the sublime Philly at Itsa, but it’s a good sandwich in its own right.   Weck’s makes their sandwiches the way you’d make them for yourself at homes.  That means they don’t scrimp on the portions.  The Different Philly is skyscraper high with a very tender and delicious roast beef.  Though it’s offered with an au jus, ask for green chile instead.

New Mexican food is available for both breakfast and lunch. Breakfast burritos are the size of a motorcycle’s sidecar. They start with three scrambled eggs folded inside a flour tortilla smothered with your choice of red and/or green chile, Cheddar and Jack cheeses served with hash browns (out of the bag and nothing special).  Both the red and green chiles are made with a surfeit of cornstarch, an unnecessary thickener which may actually detract from the flavor of the chile.

One of the best New Mexican entrees is the chicken enchilada plate served with beans, hash browns and a garnish of guacamole, sour cream, lettuce and tomato. The chicken is moist and delicious, wholly unlike the desiccated poultry you sometimes find in enchiladas. The red chile has a discernible amount of cumin.  With green chile, the enchiladas are much better.

While some of Weck’s portion sizes would challenge the most edacious of gurgitators (competitive eaters), most people do walk out with dinner in tow.  One reason not to finish your meal is so you can indulge in one of Weck’s tummy stretching desserts. These include saucer sized cookies, brick sized brownies and best of all, cinnamon rolls big enough to share.

The cinnamon rolls are glazed with a generous sheen of icing and are redolent with the aromatic essence of thickly spread cinnamon. For best results, ask your server to grill the cinnamon roll instead of microwaving it. The grilling lends a delightful flakiness to the crust while a thin coat of melted butter will cut the sweetness ever so slightly.

Even without the Beef on Weck sandwich, there are plenty of reasons for repeated visits to Weck’s. It truly is a family restaurant which has earned the loyalty of long-time patrons by treating them like new customers whose repeat business they want.