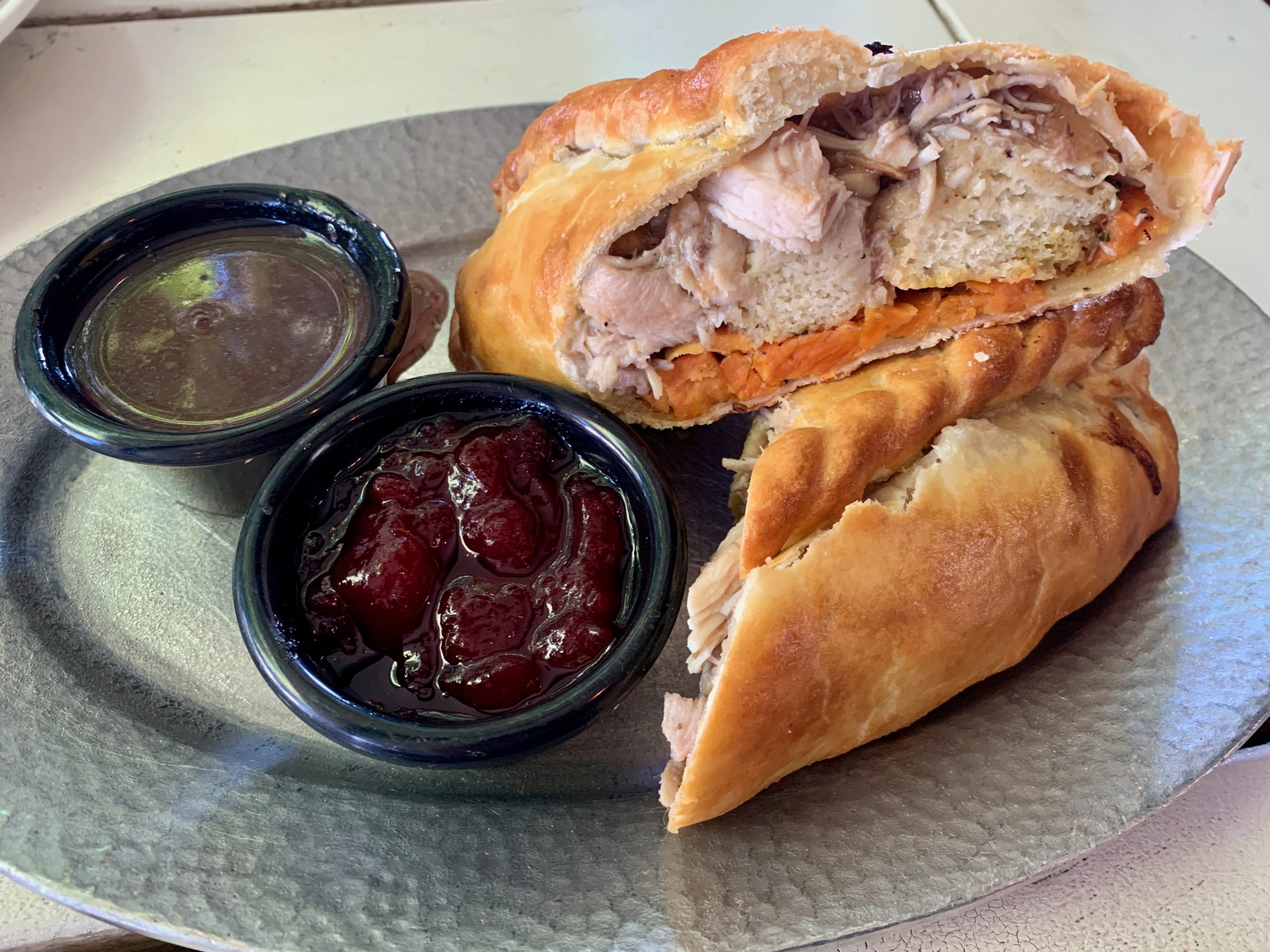 There’s a European joke that uses stereotypes to deride British cooking, among the most maligned cuisines in the world culinary stage. As the joke goes, in the European conception of heaven, the French are the chefs, the British are the police, the Germans are the engineers, and so forth, while in the European conception of Hell, the Germans are the police, the French are the engineers and the British are the chefs. Rodney Dangerfield got more respect than British cuisine.

While fish and chips are probably what most Americans would answer if asked what constitutes traditional British food, the truth is British food is as diverse as its many regions. During the three plus years we lived in England, we made the most of our opportunities to explore the mystical land of mystery and lore.  We experienced not only much of its renown pub grub, but classic high-end cuisine that is as good as any in America. At the pubs, we consumed many a ploughman’s lunch (consisting of crusty bread, various pickles, a wedge or two of local cheese and sometimes salad) and ate steak and kidney pudding (with a suet crust) like locally indigenous personnel (a MASH term that has remained on my lexicon).

During many a weekend sojourn to the appropriately sobriqueted “Land’s End” at the extreme southwestern tip of the British mainland, we dined on Cornish pasties (pronounced pass-tee), a type of pie originating in Cornwall in the 1200s. Baked by wives and mothers of tin miners when tin mining was prosperous, pasties were formed into a semicircular shape with a crimped edge along one side so the miners could hold onto them while eating. One end of the Pasty would usually contain a sweet filling which the wives would mark or initial so the miner wouldn’t eat his dessert first, while the other end would contain meat and vegetables. Today, traditional Cornish Pasties are filled with steak, potatoes, onions and swede (rutabaga).

The concept of a simple miner’s pie served in cosmopolitan Phoenix, Arizona might sound antithetical, but it’s a concept that appears to be taking off well. The Cornish Pasty Company is the brainchild of Dean Thomas, a native of Gunnislake, Cornwall, in England, who came to America in the millennial year to seek his fortune. His inaugural restaurant, one I visited in 2005, is situated on University Boulevard not far from Arizona State University, an institute of higher learning in which students want their dollars to stretch far and their meal portions to sate them for a long time. At the Cornish Pasty Company, a hearty and delicious meal can be had for a meager pittance.

The restaurant’s interior, dimly lit during evening hours, is striking with a long bar in which to imbibe imported libations, tiny tables and photographs on the black (or grey) walls of miners plying their arduous trade. Loud rock music (real rock, not the cacophonous noise played on the radio today) blares from a speaker system while the intoxicating aromas of sauces and ingredients waft gently toward incoming patrons who will be challenged to select just which pasty to partake of.

Aside from the traditional pasty (steak, potato, onion and rutabaga), you’ll enjoy perusing a lengthy listing of pasties stuffed with sundry ingredients you won’t find in Cornwall.  Those ingredients are used to create pasties sure to appeal to aficionados of the cuisine of such genres as Italian, Mexican, New Mexican, Indian, Cajun, Greek, vegetarian and more (yes, there’s a carne adovada pasty). Shaped somewhat like a deflated football (the American kind), one pasty will make a meal even for the most robust of eaters.  Several non-pasty sandwiches made on homemade bread and served with chips (the American kind) are available for the meat and potatoes Joes who don’t want to venture out of their sandwich comfort zone.

25 October 2005: If “The Porky” is any indication, the Cornish Pasty Company will be the site of future visits. This picture-perfect pasty features a baked bread pocket stuffed with pork, sage, onion, apple and potato served with a side of red wine gravy. In true miner tradition, the pasty is meant to be eaten with your hands much as you’d eat a sub sandwich. What makes The Porky so tasty is the pronounced taste of sage which is liberally sprinkled on the other ingredients. The uniquely aromatic and fresh seasoning melds well with the other ingredients to fashion a memorable meal.

It quickly dawned on me how much the pasty reminded me of the empanadas my grandmothers made.  Like empanadas which literally translate to “covered in bread,” pasties are enrobed in a golden-hued bread made in the restaurant’s scratch kitchen.  The difference between empanadas and pasties, as defined in Wikipedia is that: “Unlike empanadas, the filling ingredients for pastes are not cooked before they are wrapped in the pastry casing. Additionally, while empanadas are a light, flaky, leavened pastry containing several layers of dough, pastes use a firm and thin layer of dough.” I don’t remember my grandmothers ever baking empanadas stuffed with chicken tikka masala, but the Cornish Pasty Co. does.

22 December 2020: It took fifteen years for me to make a return visit to the Cornish Pasty Co, but like Douglas McArthur my “I have returned” visit was one of triumph because I had my Kim and our debonair dachshund The Dude with me.  Instead of visiting the original Cornish Pasty Co, we visited the Scottsdale location just north of Old Town.  Where the original was thematically (and audibly) a dark venue in which discordant rock music prove disagreeable to me, the Scottsdale location is much more laid back with a spacious patio under shade trees.  The music is much more laid back, too, a factor sure to inspire lengthier visits for patrons of my age (39).  The Scottsdale edition is also more reminiscent of the many pubs we frequented during our time in England.

Those reminiscences are solidified by the authenticity of ingredients, particularly the sauces and condiments with which we fell in love in England–sauces such as my Kim’s favorite HP Sauce, condiments such as Branston chutney and of course, the red wine gravy.  The Cornish Pasty Co is so authentic that during the pandemic, the Ploughman’s Plate (English cheeses, housemade bread, Branston chutney, hardboiled egg, apple, grapes, celery, carrots and salad garnish with house-cut roast beef and ham) was taken off the menu because several of its ingredients are imported from England.  Though not having a Ploughman was heart-breaking, consolation came in the form of other wonderful appetizers.

22 December 2020: Three decades removed from our time in England, we’ve now had more Scotch eggs in English and Irish themed gastropubs across the fruited plain that we ever did in Anglia.  Alas, we most Scotch eggs (cooked eggs swaddled in sausage meat, then breaded and fried) have met with profound disappointment.  Most are good, but hardly memorable.  We expected more of the same from the Cornish Pasty Co. and were pleasantly surprised to experience Scotch eggs similar to those in our favorite English pubs.   To our delight, there was a lot more sausage encasing the egg than we typically see in American gastropubs.  Neither of us likes hard-boiled eggs much, so more sausage is a blessing.  The pork sausage isn’t overly seasoned, but has a nice porcine flavor.  Also memorable is the honey mustard dipping sauce with its sweet and sour notes.

22 December 2020: One of our cardinal rules when dining on bread-based entrees such as pizza, sandwiches and pasties is not to order a bread-based appetizer.  That’s bread after bread and our svelte waistlines don’t need that.  Naturally, we violated our own rule upon espying chicken liver pate (housemade chicken liver pate with housemade toasted bread, butter and a red onion marmalade) on the menu.  Having imbibed the aroma of housemade loaves of bread in the kitchen, we couldn’t resist.  The lightly toasted bread, sliced to about half-an-inch thick, proved a wonderful vehicle for spreading on either (or both) butter and chicken liver pate while the red onion marmalade provided a contrasting flavor profile that worked well with either.

22 December 2020: There are fifteen different pasties on the “Signature Pasties” section of the menu, fifteen on the “Premium Pasties” section and another fifteen pasties on the “Vegan & Vegetarian Pasties” section.  That’s forty-five different pasties.  Is it any wonder we had a hard time deciding which to order.  Perhaps because our planned Christmas 2020 meal won’t be traditional (we’re going to an Italian restaurant), my Kim ordered The Pilgrim (house-roasted turkey, sweet potato, grilled onion and housemade stuffing served with red wine gravy and cranberry sauce).  It’s akin to having Thanksgiving in a pasty.  It’ll fill you up like a Thanksgiving platter, too.  Every element in this pasty is delicious on its own, but together it’s a feast for your taste buds.

22 December 2020: I can’t blame missing a traditional Christmas for my choice.  Not even close.  I was just in a Reuben mood–despite seeing all the more authentically English options on the menu.  The Cornish Pasty Company’s Reuben (pastrami, corned beef, housemade sauerkraut, Swiss cheese with a side of 1000-Island dressing) is–despite not nestled in rye bread–one of the best Reubens I’ve had in a long time.  It was pretty apparent the pastrami and corned beef aren’t of the Wild Board brand.  Our server confirmed that a local butcher prepares both the pastrami and corned beef to the restaurant’s specifications.  The sauerkraut doesn’t have the lip-pursing qualities of some sauerkraut, allowing the buttery bread shell and other ingredients to shine.  The 1000-Island dressing also shines.  It’s among the best we’ve had.

22 December 2020: The menu includes seven dessert options, several (such as the sticky toffee pudding) of which you might find in a pub in dear old England.  In 2005 during my inaugural visit to the Cornish Pasty Co., I fell in love with a dessert we never had in England, one with the quaint name of Banoffee Pie (Graham cracker crust layered with housemade caramel, fresh whipped cream and topped with sliced bananas).  After fifteen years of me telling my Kim about this transformative dessert, she finally got to try it for herself.  It was love at first bite.  It’s understandable that she would have loved the thick Graham cracker crust and housemade caramel, but she also loved the fresh (whipped to order) whipped cream, a topping she normally eschews.  How we missed Banoffee pie during our years in England is beyond me.  It’s simply one of my favorite desserts ever.

The Cornish Pasty Company is my counter to anyone who contends you can’t find good food in England or in any of the hundreds of English-inspired gastropubs under spacious skies.  Fifteen years between visits was far too long.