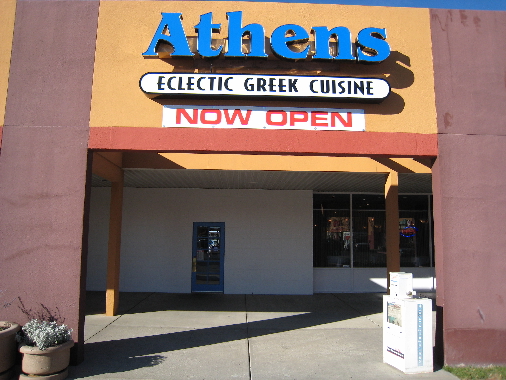 There’s an expression in Greece that all roads lead to Athens. If restaurateur Gus Petropoulos has his way, all Albuquerque streets will take diners to Athens Eclectic Greek Cuisine, the restaurant he launched in August, 2007.

Petropoulos is a veteran of culinary competition, having owned six restaurants in Florida before setting up shop in the Duke City. His new venture is located in the Far North Shopping Center where, just scant years ago, this was about as far north as you could go in Albuquerque.

The eclectic in the restaurant’s name means you’ll find so much more than gyros, Kalamata olives, feta cheese and all the other standards we’ve come to expect from Greek restaurants. It means fresh seafood flown in twice a week and other Mediterranean treats the like of which the Duke City has not experienced.

One of the unique offerings initially promised for Athens is the “lion burger” which is being held in reserve for a steakhouse Petropoulos is planning. Look for it to draw prides of diners to the steakhouse from the minute it opens.

The menu is decidedly upscale with gourmet entrees sharing space with the Greek standards we’ve all come to know and love. There’s a playful local touch to the lunch menu courtesy of a gyros quesadilla that’s sure to be popular around these parts. It’s beef and lamb spliced meat, imported mixed Greek cheeses, onions and roasted green chiles sealed inside a grilled pita (pictured below right). You’ve got to appreciate that the menu spells “chile” correctly, but you’ll appreciate its roasted flavor even more.

The restaurant’s blue vibrancy evokes images of the pristine sandy beaches and translucent blue waters of what is essentially the most important “roadway” in the history of civilized man–the Mediterranean.

Greek cuisine is characterized by the use of fresh ingredients such as olive oil, vegetables and fish. Being at the juncture of Europe, Africa and Asia and in close proximity to the Middle East, many Grecian dishes share commonalities with dishes in the Holy Land, Turkey, Italy and even the Balkan countries. That means great variety that isn’t often expressed in the Duke City’s Greek restaurants.

Athens Eclectic Greek is serving notice that with its exciting menu, it’s here to stay and will compete with its long-established Greek restaurant brethren.

Such competition begins with intriguing orektika (appetizers), some of which don’t grace the table at any other Mediterranean restaurant in town. That includes charcoal grilled octopodi, octopus marinated in lemon, extra virgin olive oil and Greek spices. It’s wholly unlike the octopus you might have at say, a Chinese restaurant.

There are traditional appetizers as well, including hummus. Athens’ version is ineluctably rich and despite a somewhat coarse texture retains the creaminess inherent in most great hummus. This chick pea and tahini spread has just a hint of lemon and an all but subtle garlic aftertaste.

Best of all, the hummus is served with eight wedges of warm, housemade pita bread. The pita’s brown char and puffy lightness make it the perfect scooping agent for the rich hummus.

Nine Thallasina (seafood) entrees grace the menu’s back page, but these isn’t back-page worthy seafood. This is front-page quality and just-caught delicious. It’s also among the restaurant’s most costly dinner fare.

For the greatest diversity, order the Poseidon platter which includes two broiled stuffed shrimp, a broiled crab-stuffed mushroom and a fillet of broiled grouper.

In Athens the sea god Poseidon was second only to Athena in importance so it’s only fitting that a worthy bounty of the sea entree be named for him.

On the terrific triumvirate comprising the Poseidon platter, the broiled crab-stuffed mushroom stands out even though the entree itself may be a misnomer. The mushroom serves as a base for a single crab-cake; it is not stuffed with it.

That’s just as well because the fleshy fungi, a four-inch in diameter Portobello is excellent in its own right with its inherent earthy flavor melding magnificently with Balsamic vinegar and Greek spices.

The crab cake is comprised of crab meat, onions, carrots, celery, pimentos, fresh herbs and spices broiled and topped with butter and bread crumbs. If it’s not broiled for two long, it’s as good a crab cake as you’ll find in the Duke City.

Two broiled crab stuffed shrimp will make you long for about a half-dozen more of these succulent decapod crustaceans, the essence of briny deliciousness itself.

The broiled grouper is dripping with butter and redolent with spices. It’s as tender and delicious as any grouper we’ve had in Albuquerque.

Landlubbers who appreciate the traditional meat-based Greek entrees might go instead for one of the Koutopolo platters, one of which includes chicken and the other which features pork. New Mexicans used to ordering their chile-based entrees “Christmas style” will be happy to know Athens accommodates a mix of chicken and pork platters.

Anyway, the Koutopolo platter features marinated, charcoal-grilled pork or chicken along with a Greek salata, fries and plenty of pita. Both the pork and chicken are fork-tender and melt-in-your-mouth delicious.

The tzatziki sauce is some of the best we’ve had in the Duke City, so good you’ll dispense with ketchup on your fries and opt instead to dip them in this creamy yogurt sauce. The salata includes plenty of fetid feta cheese and a light and flavorful Greek dressing.

Portions are humongous and a nap might be closer to your mind than dessert, but a second-take at the dessert menu might just change your mind.

Not only does the decadent dessert list include a chocolate baklava, it features my very favorite Greek post-prandial treat, Galaktoboureko. Athens’ version is the size of a huge slab of layered wedding cake.

Tissue-thin sheets of pyllo on the bottom and top of this pastry strain to hold in the lemony semolina custard which two can share and still have plenty remaining. Athens also adds razor-thin shards of fresh fruits including sliced grapes to an already creamy and moist dessert. Waist-expanding richness define this dessert.

Aside from their great taste, another great thing about Athens’ desserts is that Petropoulos’s wife Terryl is an endodontist, a specialty which deals with the diagnosis, prevention and treatment of dental diseases–not that dental diseases will be on your mind as you’re ravenously wolfing down the rich desserts.