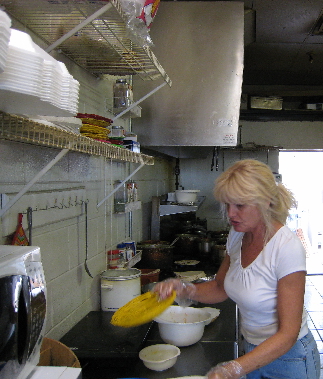 “It is the blood of the Lunas to be quiet,
for only a quiet man can learn the secrets of the earth that are necessary for planting
— They are quiet like the moon.”
~Bless Me Ultima, by Rudolfo A. Anaya

For nearly seventy-years, Consuelo Flores’s father harnessed the secrets of the earth to raise some of the best, most piquant green chile in Puerto de Luna, an agrarian community about ten miles outside of Santa Rosa, New Mexico which was made famous by Rudolfo Anaya’s classic novel. He imparted those secrets to his daughter who grew up participating in all facets of the chile “life cycle”–planting, harvesting, roasting and cooking. Today Consuelo, Albuquerque’s beautiful Burrito Lady, demonstrates every day just how well she learned those secrets by preparing some of the most delicious chile in Albuquerque.

Consuelo uses only chile of the “hot” variety, admitting it’s not as good as the green chile her family raised. After years of working in other restaurants, Consuelo launched the Burrito Lady restaurant because it’s the only way she could get New Mexican food as good as she makes it home and she wanted to share her culinary skills with Albuquerque. Her perpetual smile is like a ray of sunshine on a dreary day. Her effervescent personality lights up her restaurant and if you’re a regular, she treats you like family.

Consuelo’s petite restaurant is ensconced in an unexceptional Northeast Heights strip mall heretofore distinguishable only because of the gigantic inflated plastic reptiles atop the pet shop next door. Not much bigger than two standard office cubicles, the non-kitchen portion of the restaurant barely has room for three small tables, a counter in which orders are taken, a sideboard with brick-a-brack and not much more. The Burrito Lady is empirical proof that it’s the quality of the product that counts, not the size of the restaurant.

Hungry patrons queue outside to place their orders and though it may take a while for their orders to be taken and filled, you won’t see anyone leave–and pity anyone audacious enough to try cutting in line. A weighty take-out business accounts for much of the traffic as employees of nearby businesses call ahead for enough burritos to sate their buddies back at the office. Some of those take-out gophers also leave with sodas a plenty–not just to slake their buddies’ thirsts but to extinguish the heat generated by the capsaicin blessed chile on those burritos. The menu’s assertion “if you like it hot” isn’t in reference to a lack of air conditioning. The Burrito Lady serves red and green chile you can respect.

While burritos may be the name on the marquee, this hole-in-the-wall also serves stuffed sopaipillas, enchiladas, homemade tamales, enchiladas and tacos at very affordable prices that belie the outstanding quality of the product. The sole dessert offerings, a homemade chocolate cake topped with a chocolate frosting and a luscious chocolate brownie with just the right amount of walnuts can put weight on you just by ogling it lustily; that’s how rich it is. The Burrito Lady even exerts her independence from Coke and Pepsi products by offering a phalanx of soft drinks heretofore unavailable elsewhere: Big Red, Cherry 7-Up, Strawberry, RC Cola and more.

Eleven breakfast burritos and eleven lunch burritos showcase Consuelo’s cooking with such atypical (at least in the Duke City) ingredients as chicharrones (the crackling, deep fat fried pork treat New Mexicans love) and calabacitas (summer squash). The breakfast burritos are big enough to fill you up for the entire day, but once you bite into one, you won’t stop until it’s gone. You can have your burritos hand-held or smothered with chili (sic) and cheese. Daily specials are available for each day of the week, however, the restaurant is open only Monday through Friday from 6:30AM to 2:00PM.

The supreme breakfast burrito lives up to its sobriquet and then some. Encased in a “just off the comal” fresh flour tortilla are beans, potatoes, eggs, chile (your choice of red or green (or both)), ham, carne adovada and crispy bacon enough for even Homer Simpson (whose two favorite animals are pork chops and bacon). The best part of waking up is holding one of these treasures in your hands even though the red chile will probably run down your fingers, so profusely is it applied. This is one of the very best breakfast burritos in Albuquerque, an opinion seconded by the staff of Albuquerque The Magazine which in September, 2011 undertook the enviable task of selecting the city’s very best breakfast burrito. The Burrito Lady was the eighth highest rated burrito from among dozens evaluated.

The red chile is superb–tongue tingling and delicious enough you’re going to want your burrito smothered with it. Try it on a chicharonnes burrito for an ultra special treat. If you’ve ever had a bad experience with Texas chicharonnes which New Mexicans might call “cueritos” (a tripe-like pork strips marinated in vinegar), the Burrito Lady’s version will restore your faith in crackling pork fat and the meaty pork which clings to it. The crunch of the chicharonnes as you bite into this burrito is music to your ears; the flavor is a symphony for your taste buds.

The Burrito Lady also serves one of the best stuffed sopaipillas I’ve ever had. Crammed with a delectable roast beef, beans, rice and green chile hot enough to give me the hiccups, it might give you a week’s quota of endorphins…but, oh what a wonderful burn it will be. Your tongue will catch fire, your brow will perspire yet you won’t be able to stop eating this delicious treat.

In November, 2016, The Daily Meal posited that “the burrito may be the world’s most perfect food.” Because, the Daily Meal argued, the burrito is “customizable to the extreme,” “all the food groups are covered and best of all, the burrito is handheld.” For the fourth consecutive year, the Daily Meal compiled its list of the 50 Best Burritos in America and the Land of Enchantment was very well represented. atedt #39 was the Duke City’s aptly named Burrito Lady whose burritos “have a habit of not staying exactly closed, and can be beasts to eat.”

Albuquerque took quite a beating from the national media in 2014, but Travel and Leisure was paying attention to the positive aspects in the Duke City. In recognition of its “affable citywide demeanor” Albuquerque was ranked ninth from America’s ten friendliest cities. Though you can pick up “faux crystal-meth candy from The Candy Lady or even the “Blue Sky” donuts at Rebel Donut,” Travel and Leisure cautions not to spoil your appetite because the Duke City has “a large presence on the state’s so-dubbed Breakfast Burrito Byway” where you’ll find “two classic spots…The Frontier and Burrito Lady. “

In 2014, the popular real estate blog Movoto published its list of 29 Things You Need to Know About Albuquerque Before You Move There. The third thing you need to know is “Green Chile: Love It or Leave Town.” Movoto went on: Every major city has a food they’re famous for (Chicago for hot dogs, San Francisco for sourdough, Atlanta for, uh, grits?) but Albuquerque is serious about its green chile. You’ll put it on everything and you will love the heck out of it. Try Cocina Azul or one of my favorites, Burrito Lady.

The Burrito Lady restaurant just might restore your faith in the small family restaurant–good enough to expand, but so charming you wouldn’t want it to.