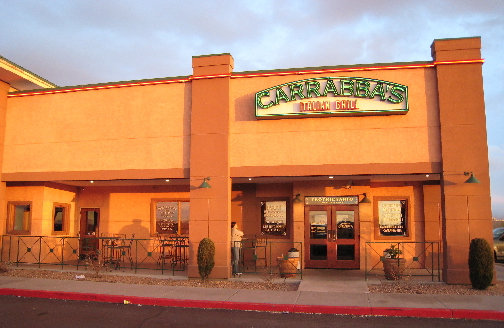 This usually means a meal at one of those copycat national chains I avoid like the plague. Although I don’t generally write about such restaurants (if you can’t say anything nice, don’t say anything at all), being a good team player, I do (sometimes begrudgingly) participate in outings to these purveyors of mediocrity.

It never fails to amaze and amuse me to see throngs of diners doing their best imitations of Pavlov’s dogs as they line up to consume what is generally pretty horrible food. It’s obvious those clever Madison Avenue brainwashers have done their job well and thanks to years of subjecting their taste buds to the cruel onslaught of mediocre food, America’s dining public just doesn’t seem to have a clue. It’s also apparent that most chain restaurants have a pretty similar template that includes mass-produced food shipped frozen from corporate headquarters thousands of miles away, a kitschy ambience that assaults the senses and copycat recipes that vary very little from one chain to another.

One of the very rare national chains which actually has impressed me over the years is Carrabba’s Italian Grill which just doesn’t subscribe to the same template. At Carrabba’s, the Italian dishes are made to order and are served fresh. High quality ingredients are procured from throughout the world. Only USDA choice beef, chicken and fish are served and they’re never frozen. Imagine that.

Albuquerque’s west side played host to the city’s first Carrabba’s restaurant. Our initial impressions were favorable as we enjoyed the new Italian innovations, effusive service and lively atmosphere of a restaurant who had exploded nation-wide over the past five years.

Over time, however, it seemed this particular Carrabba’s restaurant began to take the little things for granted and the quality of food preparation and service suffered. Immensely popular as most new franchise restaurants are in Albuquerque, it was still a surprise to see it close in 2001.

That’s why it surprised me to read a glowing review of Carrabba’s by the Las Vegas Review Journal’s brilliant food critic Heidi Knapp Rinella who listed it as one of her favorite restaurants for 2001. In Las Vegas, Heidi can pick and choose from among restaurants owned and, in some cases operated, by some of the world’s most famous chef glitterati. There had to be a reason she would list a chain restaurant as a favorite.

We made our first return visit in June, 2003 after more than two years’ absence. It didn’t take long for Carrabba’s to win us over again. Warm bread accompanied by olive oil, Balsamic vinegar and herbs started that process and the Calamari Ricardo (served with Italian pepper and lemon butter sauce) sealed the deal.

An even better appetizer is the Cozze in Bianco, fresh Canadian Cove mussels from Prince Edward Island steamed in white wine, Pernod and aromatic basil for the right touch. While the mussels in and of themselves are delicious, the best aspect of this appetizer just might be the broth in which those mussels swim. In addition to the aforementioned ingredients, the broth has evidence of finely chopped onion, zesty lemon and even a hint of fennel for a licorice-like contrast to the brininess of the mussels. You’ll want to dredge up every bit of this broth with that warm bread.

Most entrees are accompanied by your choice of soup or salad. The ingredients used to construct each salad have the hallmarks of freshness–crispy mixed field greens, ground Romano cheese, flavorful olives and Pepperonici with a bite.

The lentil and sausage soup is brimming with flavor and includes some of the best Italian fennel sausage we’ve had in Albuquerque. Carrabba’s sausage is indeed special as it is ameliorated with the right amount of oregano and spices to make it wonderfully contrasting in sweet and spicy flavors.

If you fall in love with this sausage as we did, you can get a much bigger portion of sausage on the Rigatoni Campagnolo which features Italian sausage, peppers and Caprino cheese in a Pomodoro sauce.

Although the pasta entrees are superior to those we’ve experienced at other Italian chains, it’s the grilled entrees with which Carrabba’s pulls away from the pack to distinguish itself as a special restaurant.

The grilled Colorado trout, for example, tastes like trout you caught in a high mountain stream then ameliorated with gourmet ingredients and grilled over a campfire. At Carrabba’s, that trout is prepared in a light butter lemon sauce topped with artichoke hearts and sun-dried tomatoes. The trout is light and flaky, the sauce is delicious and the grilled taste just makes it a stand-out.

Grilled shrimp are showcased in an entree called Pasta Sostanza, the restaurant’s most garlic-laden entree. This pasta dish is served in a “Picchi Pacchiu” sauce of crushed tomatoes, garlic, olive oil and basil and is topped with the restaurant’s signature crushed Italian breadcrumbs. The shrimp are sweet and have that crisp snap when you bite into them that signifies their freshness, but it’s the grilled taste that truly makes them special.

An even better dessert which also features the incomparable Blue Bell vanilla ice cream is called the John Cole with caramel sauce and roasted cinnamon rum pecans. It is one of the best desserts in town. Ask for a side of chocolate sauce for yet another adventure in taste.

Though Carrabba’s is as much a chain as so many cookie-cutter Italian restaurants in town, it truly distinguishes itself. It’s so good that I sometimes stray from my usually inviolable anti-chain policies. It’s so good, you’ll want to buddy up with your office’s social director in hopes of influencing a future visit!