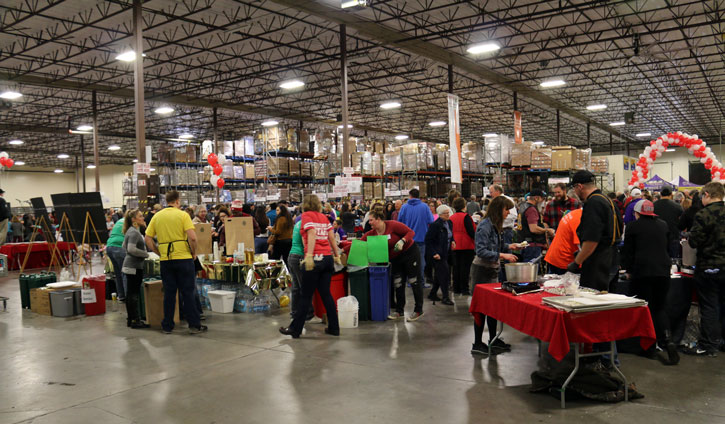 Genesis 25:34 recounts the story of Isaac’s two sons Esau and Jacob.  Talk about a sibling rivalry.  Coming home from an unsuccessful hunt one day, Esau was exhausted and famished.  The aroma of hot, steaming red lentil soup filled the air and he would do anything to have some.   His brother Jacob, a crafty schemer, agreed to give his brother some soup in exchange for the birthright to which the elder son was entitled.  Esau acquiesced.

There are two things about this popular Old Testament story that have always perplexed me.

(1)  Just how good can soup possibly be that someone would renounce a birthright to have some?  On Saturday, January 24th, 2009, I was privileged to serve as a judge in the tenth annual Souper Bowl where I found out just how good soup can be.  The 2009 Souper Bowl, Albuquerque’s foremost tasting competition, featured more than thirty of Albuquerque’s finest restaurants showcasing their very best soups and desserts.  More importantly, it served as the Roadrunner Food Bank’s premier fund-raising event.

On an overcast winter day when the cloudy grey skies reflected the mood of uncertainty and anxiousness surrounding the economy, the Duke City needed comfort food–the warmth and nurturance of soup.  Soup is restorative, it is healing, it can uplift a troubled soul.  As 32 Albuquerque chefs proved, it can also be inspired.

Even the sagacious King Solomon would have struggled to select a winner from among the scintillating fusillade of soups brought before the panel of six judges.  There were savory soups;  dessert sweet soups; sublimely scented soups;  tongue-tingling, tangy soups; incendiary, piquant soups and rich, creamy soups all seemingly seeking out, finding and tantalizing every one of our taste buds.

A compendium of ingredients, spices and seasonings were deployed.   Bischochitos were used in place of croutons on one soup.  Popcorn was a surprising find in another.  Still another saw the captivating convergence of cayenne and curry in a Tiki Masala soup.

Results were tallied and winners were announced, but the true winners were the hundreds who sipped and slurped some of the very best soup conceivable.  A bigger winner still are the hungry masses throughout the Land of Enchantment in need of sustenance and hope.

(2)  How could someone not feed a brother when he is hungry?  New Mexico is considered the hungriest state in the nation with one of six New Mexicans at risk of going hungry every day.  Nearly twenty percent of the Land of Enchantment’s citizens wonder where their next meal will come from.  New Mexico is third in the nation in childhood poverty with more than a quarter of our children living day-to-day in poverty .  These are our brothers and sisters…and there but for the grace of God go many of us, particularly in this trying economy.

Since 1980, the Roadrunner Food Bank of New Mexico has been serving the state’s hungry and is the leader in creating solutions to end hunger in New Mexico.  In the nearly three decades since its inception, the Roadrunner Food Bank has distributed more than 170 million pounds of food.  It solicits, collects and transports over 16 million pounds of food yearly.

There are several ways we can all contribute and we don’t have to wait until the annual Souper Bowl to do so.  In fact, volunteers play a key role in Roadrunner Food Bank’s mission of feeding the hungry. Roadrunner Food Bank relies heavily on volunteers to supplement its 40 staff members. Volunteers help sort, package and box all the donated food.

Speaking from personal experience, there is no more rewarding “team building” experience than for colleagues to get together to do something for others less fortunate.  It may not be as much fun as judging a Souper Bowl, but it is infinitely more important.  Other ways in which you can help feed your brothers and sisters is through monetary donations  and by conducting food drives on behalf of the Roadrunner Food Bank.

In the New Testament, Jesus took five loaves of bread and two fish and fed the multitudes.  The Roadrunner Food Bank returns $9 worth of food for every dollar donated.  Please help the Roadrunner Food Bank continue to perform day-to-day miracles that touch the lives of our New Mexican brothers and sisters.  Your generosity is more important now than ever!