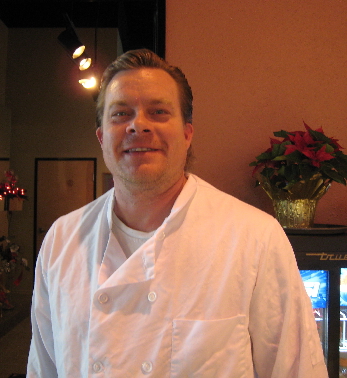 Long before the Food Network made chefs legitimate on-air celebrity icons, Albuquerque had its own larger-than-life, media-savvy celebrity chef who, it seemed, spent almost as much time on the airwaves as behind the stove.

Chef Jim White was a peripatetic presence on television where he hosted short cooking segments on two Duke City television news programs in addition to having a three-minute format airing in a San Diego station. He also wrote a highly-regarded food column for the Albuquerque Journal.

So well known was (and is) Chef Jim White that in Albuquerque his name is always prefaced with his title, “Chef.” In society, only doctors and professors seem to earn that level of respect and in Hollywood, the celebrity equivalent might be being known by first name (i.e., Oprah, Beyonce).

Chef Jim White was everywhere. He had the energy, enthusiasm and credentials (graduating no less than at the top of his class at the Culinary Institute of America) to carry off bona fide celebrity. He also had an endearing effusive personality that engendered genuine affection among many loyal patrons.

From 1999 until July, 2005, the indefatigable chef also owned Casa Vieja, a venerable Corrales restaurant. At Casa Vieja he popularized a “progressive regional cuisine” concept in which he created different menus on a monthly basis to reflect each of America’s thirteen culinary regions. A “best of” menu from among those regions resulted.

After selling Casa Vieja, you could substitute Chef White’s name in the “Where’s Waldo” game. Rumors abounded as to what he was doing and when he would resurface in the public eye.

For a while, Chef Jim was involved in a kitchen design enterprise, but soon found out what home builders know–contractors in the construction game are notoriously unreliable and their inability to meet schedules impacts everyone down the line.

In 2007, the entrepreneurial chef began plying his culinary talents from a 46-food mobile kitchen. His catering company can go virtually everywhere and offers a wide variety of dining options.

2007 also saw Chef Jim return to a more conventional venue, a restaurant ensconced in the New Mexico Design Center, a sort of home design superstore on Alameda. It’s where this chef belongs!

The chef’s new restaurant venture is tastefully appointed in a modernistic fashion. The walls are a veritable festival of colors that go well together. Umbrella-like canopies are suspended from the ceiling.

The restaurant’s menu is displayed on three framed whiteboards hanging behind the order counter. That menu is segmented into logical categories: Wake Up Albuquerque (breakfast), Salads, Pasta, Our “World Famous” Hero Sandwiches, Burgers, Additional Necessities (appetizers), New Mexican, Worth Special Mention (every day specials) and Sweets for My Sweet.

Chef Jim White’s Cafe is open for breakfast and lunch, from 7AM through 2PM. Some of the menu items will be familiar to diners who visited Chef Jim at the long defunct Humphrey’s Cafe and at Casa Vieja.

“World Famous” Hero Sandwiches may sound like an audacious claim, but considering the number of Air Force personnel for whom Humphrey’s was a very popular dining choice for years, it’s probably an accurate claim. There was a time in which Humphrey’s the place for sandwiches in Albuquerque.

One of the chef’s best sandwiches is the steak and peppers sandwich which is loaded with thinly sliced and perfectly tender strips of beef along with grilled red, yellow and green peppers on a lightly toasted sub roll. Every bite is an adventure in eating pleasure.

One of the chef’s most popular dishes from his tenure at Casa Vieja was the Ultimate Mac & Cheese and it, too, is on the menu–appropriately listed in the “Worth Special Mention” section. You’ll agree it earns the title of special.

Made with a four cheese blend, this may well be the ultimate mac and cheese. It is sinfully rich and creamy, an adult mac and cheese which will have you forever swearing off Kraft dinner. Lightly dusted with parmesan, it is the perfect melding of complementary cheeses. It will devastate any diet, but you won’t care about that until afterwards.

Daily specials might include other pasta and cheese sensations such as tortellini with brie and spicy chicken breasts. This is a sinfully rich and thoroughly delicious entree that melds many tastes–the creamy richness of the brie, the sumptuous texture of pasta and the almost Cajun piquancy of the chicken whose redolence and taste were somewhat reminiscent of the blackening process.

If the daily special includes a side salad, by all means ask for the blue cheese dressing. Chef Jim adds cracked pepper and Tabasco sauce to a pungent blue cheese for a great taste sensation.

Chef Jim makes no secret of the fact that he received an essential part of his culinary training well into his career. That’s when he learned to prepare New Mexican food from his Los Lunas born and raised mother-in-law Luz and her sister Cecilia.

The stacked enchiladas feature layers of fried corn tortillas, chile and your choice of chicken, ground, beef or carne adovada all blanketed with either red or green chile. For the best of both worlds, order “Christmas” style and don’t forget to order a fried egg on top of this entree.

The red and green chile are about medium on the piquancy scale, but both are hearty and delicious. The red chile is a deep, rich red color reminiscent of red chile served in restaurants in Belen and Los Lunas. One surprise addition to the enchiladas are strips of crispy bacon. Add bacon to anything and it’s instantly better.

Add New Mexican green chile to a cheeseburger and you’ve got a winner. Chef Jim’s burgers are enormous in both size and flavor. The meat patty is thick, well-seasoned and prepared to your exacting specifications (it’s just about perfect at medium).

The green chile is only mildly piquant, but has a fruity flavor and is delicious. This is an excellent green chile cheeseburger and it’s accompanied by French fries seasoned with oregano, salt and pepper, an excellent seasoning array.

On your way out, don’t forget to pick up oatmeal or chocolate chip cookies. It might be about all the room you’ll have after a superb meal prepared by a legitimate celebrity chef.

There’s a bit of an “all is right with the world” sentiment with Chef Jim White back where he should be–preparing some of Albuquerque’s favorite dishes and effusively hobnobbing with his customers.