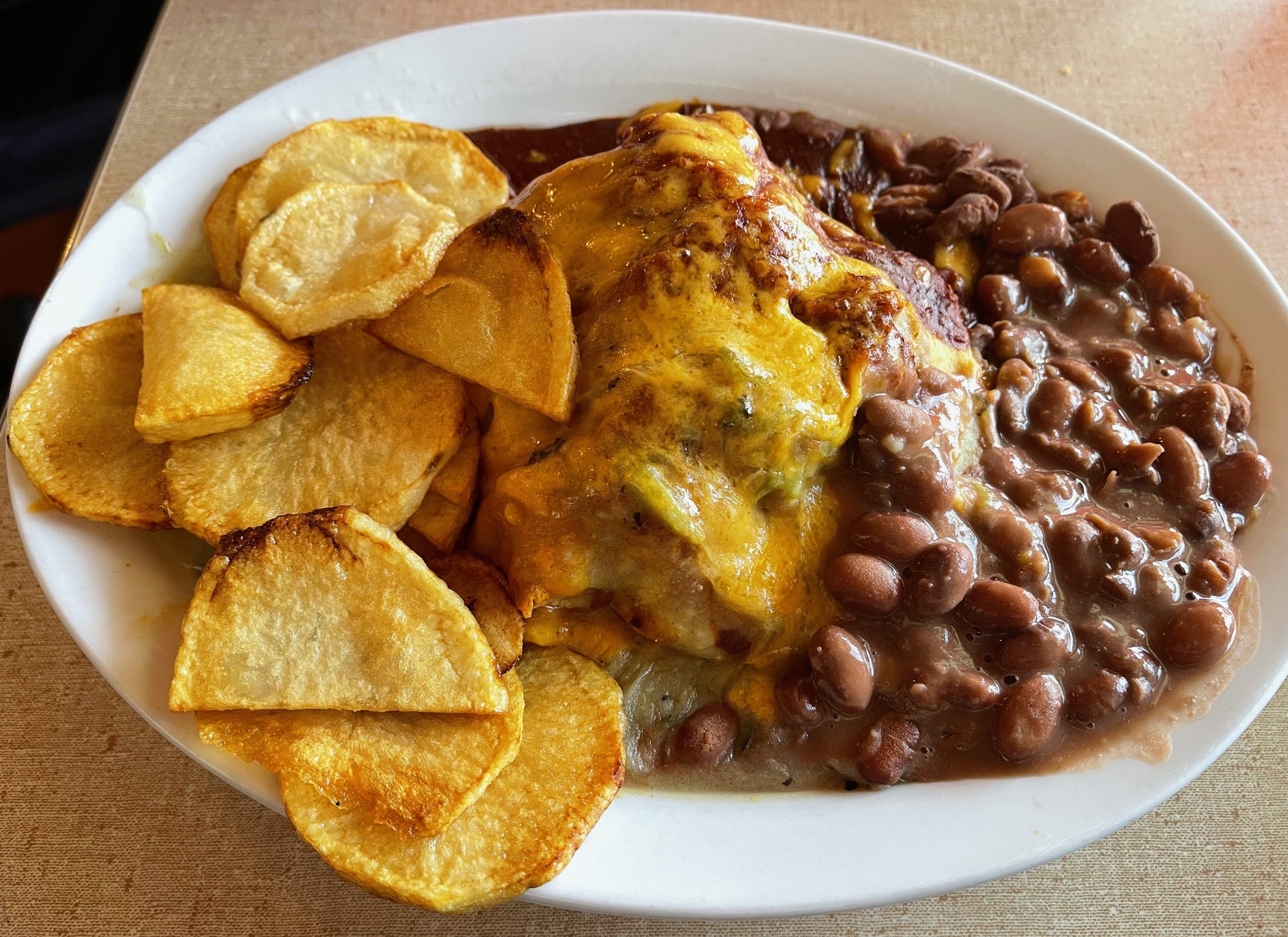 Many of us who predate, however slightly, the explosion of institutionalized fast food retain a fondness for the remaining independent family restaurants whose arsenal in the competition for hungry diners consists of reasonable portions of great meals at budget-conscious prices all served by a friendly and accommodating waitsfaff. An Albuquerque restaurant which epitomizes those ideals is the El Camino Dining Room, captured brilliantly above by the fabulous photographer Deanna Nichols.

The El Camino was built by Clyde H. Tyler in 1950, five years after the latest “war to end all wars” and 13 years after Route 66 was “straightened” so that it would bypass Santa Fe completely.  Albuquerque was much more innocent back then.  Some might even describe it as a “cow town trying to be a city.”  At the time, 44% of America’s population resided in rural areas and the Duke City’s population was only 96,800. Despite no longer being part of Route 66, one of the city’s busiest thoroughfares was 4th Street on which commerce was burgeoning.  It was the perfect location for an independent family restaurant, far from the cavalcade of Howard Johnson’s type restaurants which grew along the interstates.

Similar to Howard Johnson’s which prided itself on providing all the amenities travelers would need in one convenient location, El Camino also included a motor lodge (a hotel for motorists which provides direct access from rooms to the parking area).  The motor lodge is directly across the street from the restaurant though the two are no longer affiliated. While El Camino doesn’t exude the pristine veneer or the effusive, over-the-top flamboyance of the chains that dominate today’s Duke City dining scene, it still radiates much of the charm that must have captivated Albuquerque diners when it first launched more than seventy years ago.  That charm includes immaculate whitewash adobe walls, rough-hewn vigas and latillas painted dark brown, old-fashioned glass block windows and vintage signage.  It extends to the warm service and hospitality.

Great service is a hallmark for the restaurant’s current proprietors Lydia Sakelaris, her daughter Mandy Chavez and her husband Gilbert.  One of the three is always on hand to ensure their patrons receive outstanding service.  The wait staff is typically on-the-spot with a refill and will check up on you unobtrusively to ensure your meal is a pleasant one.  Fortune smiles on you if your server is Gilbert, Jr., a perpetually smiling ambassador for the restaurant.  Referring to diners as “boss,” he’s a fountain of knowledge when it comes to El Camino’s most famous guests (if you guessed the stars of Better Call Saul, you’d be spot on).  Rhea Seehorn, he’ll tell you “is very nice” while Jonathan Banks is pretty free with “colorful language.”  He’ll also tell you El Camino’s three cameo appearances on Better Call Saul has brought in visitors from Germany, Japan and a host of other countries.

Chances are many first-time visitors to El Camino didn’t make their way to North 4th for El Camino’s place in Albuquerque’s history.  Maybe not even for a good representation of New Mexican cuisine.  A lot of them came to sit at the table in which enigmatic beauty Kim Wexler (Rhea Seehorn) enjoyed sopaipillas or at the stool in which Mike Ehrmantraut (Jonathan Banks) drank coffee.   During three episodes in the final season of Better Call Saul, El Camino played gracious host to the cast of one of the most highly regarded spin-off slash prequels to any television series in modern television history.  Fittingly, the restaurant shares its name with the Breaking Bad movie, El Camino.

The restaurant’s menu lists more than 60 dishes ranging from American comfort food favorites and diner specialties to New Mexican standards such as carne adovada and huevos rancheros, the house specialty.  In its June, 2010 edition, New Mexico Magazine celebrated New Mexico’s Best Eats, eight of the best dishes served in restaurants throughout the Land of Enchantment. Two versions of each dish–a down-home version and uptown version were selected. The state’s very best down-home huevos rancheros come from the El Camino. There’s a good reason huevos rancheros are the specialty of the house and among the very best in the state.  Fluffy eggs any style you desire, melted cheese, and red chile–that’s as good a reason to get up in the morning as any.  Lounging on the plate with the huevos are some of the best home fries (papitas) you’ll find anywhere.  They’re more than silver dollar sized with a crispy, golden exterior and tender, cooked all the way through interior.

El Camino is open daily for breakfast and lunch and everything is made fresh daily.  Best of all, if you want a green chile cheeseburger for breakfast or pancakes for lunch, you can have them. As with many old-fashioned 50s and 60s era family style restaurants, El Camino also serves wonderful pancakes.  A short stack features two griddled orbs six-inch in diameter and slathered in butter and syrup.  Now that’s breakfast!   “Deluxe Mexican Dinners” are a bargain.  Each plate begins with a bowl of chips and salsa and ends with fluffy sopaipillas.  In between, your entree might be tamales, enchiladas, tacos or some other tempting main course, each served with sides of beans and Spanish rice.  The chips and salsa are very good.  The salsa is fresh and delicious, the genesis of its piquant bite being jalapenos.  The chips are lightly salted and crisp, but formidable enough to hold Gil-sized portions of salsa.

15 November 2022: There are eight enormous (almost family-sized) options on the “Deluxe Mexican Dinners” section of the menu.  If you’re into semantics, don’t fret too much.  These are “New Mexican Dinners” prepared the way denizens of the Land of Enchantment prepare them.  When El Camino opened its doors in 1950, New Mexican cuisine hadn’t distinguished itself as a unique offering separate from the cuisine of Old Mexico.   The header “Deluxe Mexican Dinners” is one of many things that hasn’t changed in seventy-plus years.  Let’s hope the recipe for El Camino’s green chile stew (which comes with each of the Deluxe Dinners) doesn’t change.  The green chile stew is special: cubed potatoes, tender pork, piquant green chile and just a hint of Mexican oregano.  As with other items on the menu, it’s served piping hot.  The steamy bouquet of  New Mexico grown green chile wafts upwards toward your merrily awaiting nostrils.  The green chile is not quite medium on the piquancy scale, but it has a nice roasted flavor.

15 November 2022: The featured entree on number three Deluxe Dinner is enchiladas made your way.  That means you can have them either rolled or stacked (the Northern New Mexican way) and with red or green (or both) chile.  El Camino’s red and green chile are pure–no cumin.  Both are  slathered on generously but not enough to drown any entree.  Neither is especially piquant though if you don’t prefer your chile on the thickened side, opt for the green chile.  In combination with melted, shredded cheese, the red chile is very much on the thick side.  There’s enough of it to use on the beans and rice (trust me and ask for home fries instead of rice).

15 November 2022:  When my Kim orders pork chops for breakfast at a New Mexican restaurant I’m reminded that Chicago, where she was born-and-raised was called “hog butcher for the world” by three-time Pulitzer Prize award-winning poet Carl Sandburg.  Where and when she grew up, there was no such thing as red and green chile anything for breakfast and even when you could get salsa, it was likely made in New York City.  So, she can be forgiven if she doesn’t want to shock her taste buds awake with something befitting chile’s “pain is a flavor” level of heat.  Still, at many Mexican restaurants, you have to wonder if the butcher was trying to slice pork chops as thin as baloney slices.

That’s not the case at El Camino where the pork chops are about half-an-inch thick.  That’s waifishly thin compared to pork chops in Chicago, but pretty thick for New Mexico.  Moreover, these pork chops are bone-in and delicious with a nice char that seals in moistness.  A two-per-order pork chop breakfast includes two eggs (any style) and greater than silver dollar-sized home fries.  These are some of the best papita-style breakfast (or any time) fries you’ll find in any Albuquerque restaurant even though they’re very lightly salted (my preference over having over-salted foods).

One of the “Deluxe Mexican Dinners” features two tamales.  The tamales are some of the best in the city.  I’ve often heard it debated as to whether tamales are about the chile infused pork or beef filling or about the corn masa encasing that pork or beef.  Few tamales strike a perfect balance.  Either the masa is so thick it overwhelms the meat filling or the meat filling and especially the chile don’t allow any of the masa’s corn flavor to come out.  El Camino has the secret to great tamales down pat.  The masa is redolent with corn flavor, the pork is tender and the chile tongue-tingling and delicious.  The flavors coalesce beautifully!

15 November 2022:  At El Camino, the sopaipillas may not be large “sofa pillows,” but they’re made fresh and delivered steaming hot to your table.  Open them up and steam does indeed waft upwards toward your anxiously awaiting nostrils.  Moreover, they’re served with real honey not that pseudo honey-flavored syrup served in too many New Mexican restaurants.  Sopaipillas make for a wonderful dessert, but if you’ve still got room or want something for later, pick up a package of six biscochitos.  The biscochitos are thin and crumbly, but they’re topped with lots of anise and sugar.

El Camino is one of the northernmost restaurants on 4th Street, one of the most trafficked restaurant destinations in the city.  It’s a classic New Mexican restaurant beloved by locals and television stars alike.