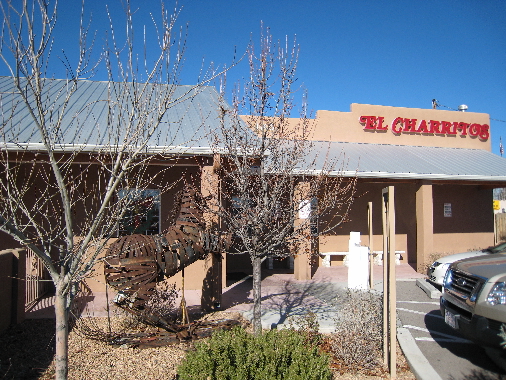 Many New Mexico born Hispanics of my generation grew up watching not only American “shoot ’em up” Westerns featuring rugged cowboys, rowdy rustlers, round-ups and home on the range, but the Mexican equivalent–movies featuring the exploits of charros, the traditional cowboys of central and northern Mexico.

Despite my admiration for the charros of the cinema, it took more than 20 years before my first visit to a restaurant named for the dashing Mexican horsemen who were equally adept with a lasso as they were with a gun.

I had driven past the Central Avenue location of El Charritos for years, first when it was on the south side of Central then after it moved across the street to a modern, capacious building. What a mistake!

El Charritos has the authenticity I crave from New Mexican food–red chile unadulterated by cumin, chile rellenos with a bite and tamales in which the pork isn’t overwhelmed by masa. Mexican music fills the commodious dining room whose walls are festooned with the art of Roberto Perea.

My introduction to El Charritos came in the form of the El Charrito Super Combination: one enchilada filled with melted cheese, one ground beef taco, one pork tamale and one chile relleno served with refried beans, Spanish rice and two sopaipillas.

Only the Spanish rice was wholly unremarkable (a ubiquitous rice and lackluster tomato mixture), a prevalent trend throughout Duke City restaurants. Many New Mexicans I know will tell you “Spanish” rice was never served during any meal at home and Spain certainly makes no claim to having inspired or created this most insipid of side dishes that few Albuquerque New Mexican restaurants leave off your plate. Perhaps it’s served to make everything else seem better.

Lackluster though the Spanish rice may be, the tamale (served Christmas style with both red and green chile) is excellent. The carne adovada in the pork tamale is wonderfully marinated in a richly seasoned red chile that bites back with a sensational, tongue-tingling, flavor that’s just above medium in the piquancy scale. The shredded pork isn’t engulfed in thick corn masa as is often the case. The masa is instead a corn flavored ameliorant.

The chile relleno is generously stuffed with cheese then deep-fried until golden brown. The chile (it’s not a poblano) is somewhat stringy and difficult to cut with just a fork, but it makes up for stringiness with a mild flavor.

The ground beef taco, albeit somewhat greasy, bursts at its seams not just with ground beef, but with a potato filler (a sin in my book). The taco isn’t overfilled with lettuce and tomato, but there is plenty of that on the plate thanks to enough garnish to make a small salad.

El Charritos salsa has the consistency of tomato sauce. It’s pureed almost to a fault, but is thick and served cold as if out of the refrigerator. It’s not the most piquant salsa in town, but has a nice flavor. You can discern garlic and jalapeno most prevalently.

Sunday brunch is a dress-up affair at El Charritos; dress-up that is if you’re a member of the Mariachi Nuevo Tapatio which serenades patrons while they dine with a repertoire of traditional Mexican favorites such as Amor Eterno and La Golondrina.

As absolutely delightful as the mariachis are, the throngs of patrons waiting for a table to empty out dictate that you don’t linger after your meal. You can order either off the breakfast menu or the regular menu and in either case, will be treated to some of the best New Mexican breakfast entrees in the city.

A breakfast entree worth getting up for is the breakfast burrito with chorizo from the Carniceria (Mexican grocery specializing in meats) Chihuahua. The chorizo is perfectly seasoned with nice piquancy for an extra burst of flavor; it complements the red chile wonderfully.

El Charritos also has some of the largest pancakes (easily eight inches in circumference) around. They’re big, thick and absorb syrup like a sponge, but they’re also terrific.

The sopaipillas aren’t the billowing pillows you might find elsewhere. In fact, they more closely resembled Indian fried bread both in texture and in flatness, but there’s no mistaking the nonpareil taste that makes them among the very best sopaipillas we’ve had in the Duke City.

One of the things that distinguishes El Charritos sopaipillas is the fact that they’re not served with “sopaipilla syrup,” the honey flavored syrup with which most New Mexican restaurants in the city fill their squeeze bottles. El Charritos honey is the real stuff.