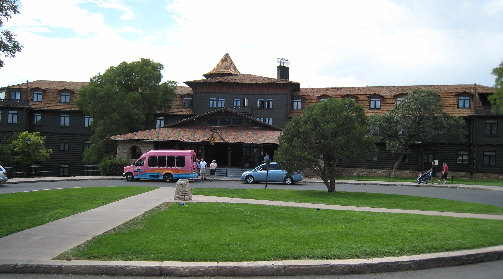 That was the reaction of a friend of mine, who much like other modern Americans is so caught up in the trappings of pop culture and “technolust” that he’s lost the ability to be impressed by what it has taken nature millions of years to produce.

It took some six million years for the Colorado River to create the multi-hued, steep-sided gorge that is today considered one of the natural wonders of the world.  The incomparable magnitude of the Colorado River’s handiwork certainly wasn’t lost on the Fred Harvey Company, the West’s most prolific hospitality providers during the great era of the Atchison, Topeka and Santa Fe Railway (ATSF).

In 1905, the Fred Harvey Company opened El Tovar Hotel a mere 30 yards from the south rim of the Grand Canyon.  Today, the hotel remains the premier lodging facility at the Grand Canyon, having been most recently renovated in 2005.  It is at the northern terminus of the Grand Canyon Railway, formerly a branch of the ATSF.

El Tovar is elegant and charming, an upscale example of an architectural style known as National Park Service Rustic and is on the National Historic Registry.  Its 78 rooms and suites include air conditioning, full bath, telephone and cable television (which would no doubt be what my friend would spend his time watching).

El Tovar also offers its guests Concierge, turn-down and room-service.  It has a commodious lounge, curio shop and newsstand.  For guests and visitors who have spent their time hiking the expanse of the canyon rim, El Tovar also features a fine dining room open for breakfast, lunch and dinner.  Though no longer owned by the Fred Harvey Company, El Tovar retains the company’s impeccable standards for service and surprisingly good cuisine.

The El Tovar Dining Room provides an atmosphere of casual elegance.  Constructed of Oregon pine and native stone, it is traditional in decor and ambience.  The menu incorporates both classic and regional flavors while utilizing contemporary preparation techniques.  It is the Grand Canyon’s premier dining establishment and is open year-round.

As with most resort area dining establishments, the El Tovar Dining Room experiences a rush of teeming throngs during conventional breakfast, lunch and dinner hours.  There’s also a rush when the Grand Canyon Railway passengers arrive.

The best time to dine at the El Tovar is during off-hours, say 2PM for lunch.  That’s when we last visited and we were seated within minutes.

A multi-national wait staff seems only appropriate considering the significant number of international tourists who visit the Grand Canyon every year (and most of which probably don’t spend their time playing video games at the hotel).

An excellent lunch choice for sandwich lovers is the dining room’s Hot Pastrami and Pepperjack with Grilled Red Onion on Sourdough. The pastrami is piled high atop a sheen of spicy gourmet mustard and is draped by the cheeses.  The pastrami is excellent, far better than what is served in most sandwich shops throughout New Mexico.  The sourdough bread lives up to its name with a slightly tangy, albeit not quite sour, taste.

Salad is normally considered lighter fare, but at the El Tovar Dining Room, a salad can easily make an entire meal.  Consider the Blackened Natural Pork and Spinach Salad which is constructed with spinach, pear tomato and cucumber, tossed in Hoisin sesame vinaigrette with Mandarin oranges, fried wontons and tossed sesame seeds.  It is a masterfully plated, flavorful mélange of high quality gourmet ingredients.  You won’t find a single piece of sinewy chicken on this salad.  Like the El Tovar, it is top notch!

With all respect to my Luke Skywalker worshipping, mouse-loving (he’s a Star Warrior and Disneymaniac) friend, there’s nothing in Mouseland or on any galaxy far, far away quite like the Grand Canyon…and few restaurants anywhere like the El Tovar Dining Room.