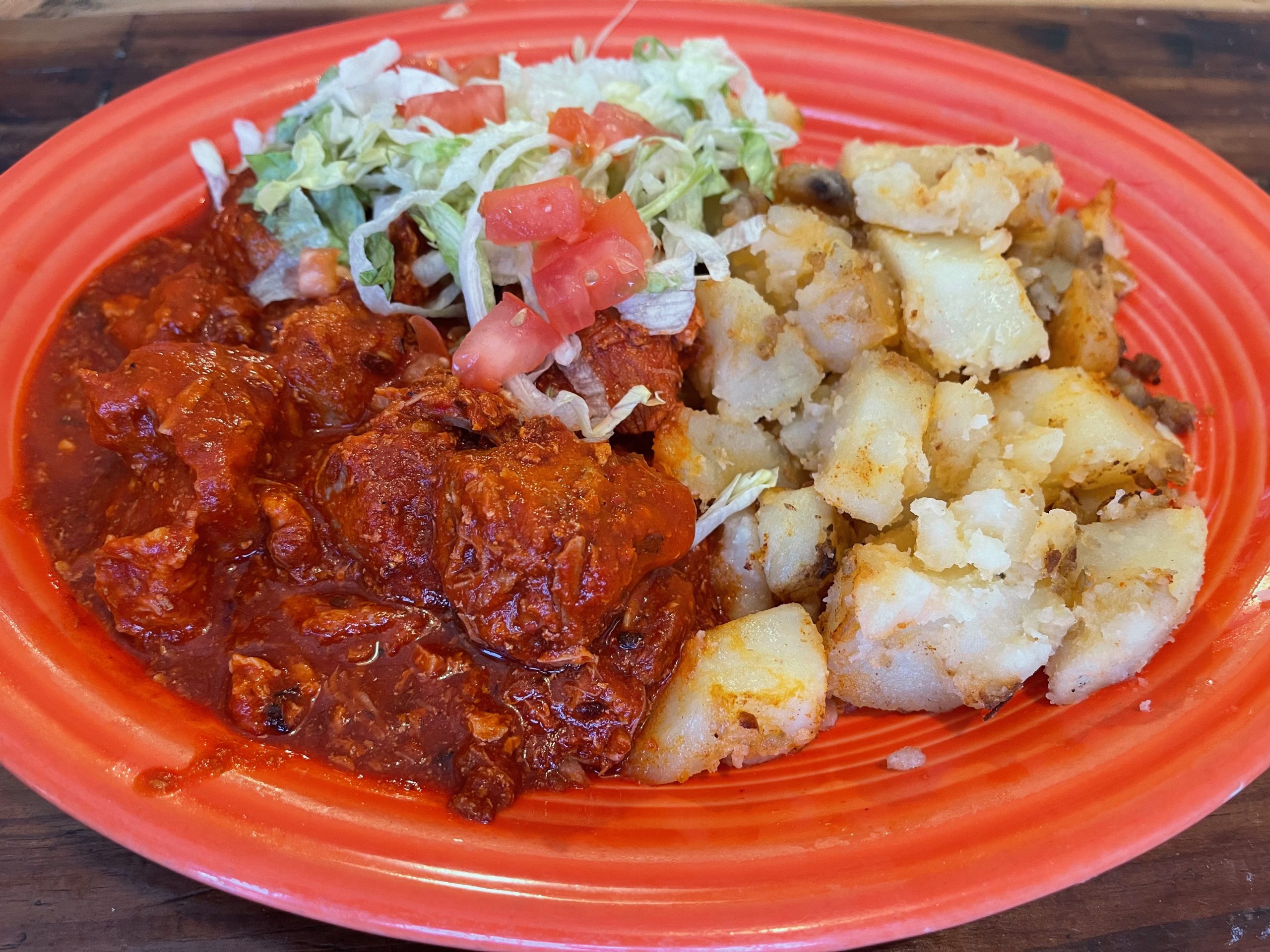 One of the central themes of William Faulkner’s magnus opus Absalom, Absalom! is that no two people experience the same thing. Of the four characters who narrate the story, none of them is completely reliable because each has a personal bias, a unique frame of reference based on personal experiences to call upon. Readers are left to determine those biases and how they affect the telling of the story. With the passage of time, one of the characters experiences the memory of the events differently than she experienced the events when they happened.

Similarly, no two diners experience the same meal. Sure, they may partake of the very same entrees, but how they perceive their dining experience may be tainted or enhanced by personal bias and past experiences. This is painfully obvious in reading the comments following my review of Garcia’s Kitchen. Some readers took umbrage at my having reviled a restaurant they love while others agreed with my assessment and readily piled on. My friend John L. sagely suggested “they (Garcia’s) need to work on consistency among the various branches,” the implication being I should try Garcia’s at other locations as he had.

There are seven Original Garcia’s restaurants across the Duke City. Though one might expect a consistent experience and standardization across the seven, John’s comments and reviews published on Yelp indicate a lack of consistency among the seven Garcia’s. To paraphrase Faulkner’s observation, perhaps “no two kitchens prepare the same food” and “no two restaurants provide the same service“–even if those restaurants are of the same family and bear the same name. The review I published and with which some readers took umbrage was based on a visit in 2007 to the Garcia’s on Juan Tabo. It was a visit that tarnished my opinion of the restaurant.

When my friend Nader Khalil recommended we visit Garcia’s Kitchen on 4th Street (just north of Mountain Road), my initial response was hardly enthusiastic, but Nader has never led me astray when it comes to restaurants. He once worked as a chef in Phoenix and truly understands the nuances of ingredients, seasoning, preparation and the multitudinous factors which play into a great meal. Garcia’s, he assured me, would redeem itself. He boasted especially of the restaurant’s menudo, a welcome repast on the rainy, windy day in which we visited.

External signage at some of the Garcia’s restaurants includes the subtitle “The Original.” Obviously this doesn’t mean the first one of the seven Garcia’s Kitchen restaurants. I surmise the designation “The Original” might have something to do with a short-lived interloper named Garcia’s of Scottsdale which opened and closed in the early 1980s in the uptown area. The bona fide Original Garcia’s Kitchen has been serving Albuquerque diners since 1973. That’s nearly 45 years of people pleasing that says it’s doing many things right.

Some of Garcia’s familiarity can be credited to a caricature of Andy Garcia, the restaurant’s owner. That caricature depicts a sombrero wearing Andy with a cherubic smile holding a plateful of tacos on one hand and a towel on the other. It is prevalent throughout his restaurants; you can find it on colorful paintings, the menus and even on napkins. Every one of the seven restaurants is brightly and festively decorated with an ambiance tailored to the specific neighborhood it is serving. One of the many things that makes Garcia’s so popular is its breakfast at any time option. Likely because of political correctness, the menu no longer includes a separate section called “Gringo Breakfast” which listed entrees without chile.

Make that “chili” or at least that’s the way it’s spelled on the menu (though it’s also spelled “chile” on that same menu). It’s one of several menu malapropisms the purist in me finds hard to accept as cutesy. Other liberties taken on the menu include the spelling “Karnitas” and the listing of fajitas under the New Mexican food (fajitas originated in Texas). Yeah, I know. What do I want–good grammar or good taste? Obviously there’s nothing as important as great tasting New Mexican food and that’s where Garcia’s has won over legions of fans. If my my most recent visits are any indication, I’m becoming a convert.

20 October 2007 (Juan Tabo location): Modern technology has made possible the desalinization of ocean water. It shouldn’t be that difficult to desalinate chips (or to find vendors who proffer chips that aren’t quite so salty). Unfortunately, the chips at Garcia’s are almost too salty to enjoy. That’s entirely too bad considering they’re served with an excellent, rich red salsa with the piquant bite purists crave. With better chips, it’s a two bowl minimum pre-meal salsa.

20 October 2007 (Juan Tabo location): Another culinary transgression no restaurant should ever commit is serving its food at a lukewarm temperature. To me that’s a near criminal offense. New Mexican food should be served piping hot. Diners would rather hear the warning, “be careful, the plate’s hot” than to have to request their meal be reheated (never ask for it to be “nuked” because microwaves commit felony-level crimes on foods they reheat). During this visit, I did have to ask for my enchilada plate to be reheated. That, more than the flavor of the plate, is what remained on my memory.

15 May 2017 (1113 4th location): My friend Nader is a bona fide volcano-eater, an intrepid diner with an asbestos-lined mouth. Even more than me, he enjoys food that bites back. The fact that Garcia’s menudo earned his respect, admiration and utterances of “that’s hot!” should be a calling card for diners who enjoy a “pain is a flavor” dining experience. Available in large and extra large sizes, the menudo is served with hominy (not called posole on the menu). As New Mexicans know, menudo is made from cow’s honeycomb-structured offal. Unless prepared correctly, menudo’s off-putting, appetite-suppressing odor will deter even the most intrepid of diners. Garcia’s prepares it well, serving it with an incendiary red chile that bites back. Menudo is not for everyone, but if you’re an aficionado, Garcia’s version is one you’ll enjoy.

15 May 2017 (1113 4th location):You’ll also enjoy Garcia’s green chile stew, especially on cold, blustery days–even in mid-May when New Mexico’s weather makes liars out of media meteorologists. Available with or without beans, it’s served piping hot–just as it should be when cold weather will chill you to the bone. From both the perspective of temperature and piquancy, it’s a “hot” green chile stew with a pleasant bite. It’s also very well balanced with plenty of ground beef and chile, not an excess of potatoes. If your preference is to enjoy it with beans, you’ll appreciate these frijoles, whole beans with a terrific flavor.

15 May 2017 (1113 4th location): There are thirteen burritos on the menu and they’re available with chile on the inside or smothered with chile and cheese on top. You can have your burrito ala carte or in the form of a plate (refried or whole beans, rice or papas). Nader’s favorite is the aforementioned fajitas burrito (grilled beef stripped, grilled onions and green peppers with guacamole and pico de gallo inside). You’ll maximize your chile apportionment by having your burrito smothered. Ask for red and green, too. Both the red and green chile have a pleasant piquancy. There’s no false advertising with the fajitas burrito. It does indeed taste like chile smothered fajitas. Very good fajitas!

15 April 2022 (6390 Coors, N.W. Location):  Cooking for Balance explains “The human body is very complex with an intricate system of balances and signals that help it function properly. Food cravings are just another way for the body to signal what it needs, giving us the chance to fulfill that need.”  One of the more common causes of craving specific foods is association with holidays.  Every year on Good Friday, my cravings are for torta de huevos, a dish my beautiful mom prepared every year during this sacred holiday when Catholics are expected to abstain from meat.   Thankfully a number of restaurants sate the Catholics among us with torta de huevo plates.  Garcia’s version includes two tortas, fideos, calabasitas and beans.  Picture a sort-of egg fritter whipped into a light, fluffy texture and fried then topped with red chile. There’s no way you can bemoan the fact that you didn’t have a single hamburger on a Lenten Friday.

15 April 2022 (6390 Coors, N.W. Location): Being a convert, my Kim didn’t grow up with the same Catholic traditions (or restrictions) so instead of depriving herself, she ordered Garcia’s carne adovada plate.  Much like the serpent that tempted Eve with a bite of a forbidden fruit, my bride tempted me with a tortilla wrapped around a generous, tender hunk of chile marinated pork.  Exactly like Eve, I succumbed to temptation and ate it with the same fervor as a shark devouring a leg dangling from a rubber raft.  Aaargh, time for confession again.  Garcia’s carne adovada is delicious.  Who wouldn’t fall into temptation.

15 May 2017 (1113 4th location): Garcia’s sopaipillas are also quite good–and they are served steamy hot. They’re not quite pillowy as at other restaurants, but they always feel and taste freshly made and delicious. Moreover, they’re not at all greasy and have a pleasant “mouth feel.” Instead of being served with real honey, they’re accompanied by a “honey-flavored syrup,” a 70/30 blend according to one of our servers. Still, it’s not quite the same.

Garcia’s also serves excellent biscochitos. The official New Mexico state cookie, the best biscochitos are topped with plenty of anise for sweetness and flavor. These are some of the best!

It’s always been my contention that the true mark of a great restaurant is consistency (great food, great service) over time. For restaurants with more than one presence in a city or state, that consistency should apply across all locations. If diners know exactly what they can expect at McDonald’s, shouldn’t they also know what to expect at the seven Garcia’s restaurants across the Duke City? It will be interesting to visit other locations throughout the city to see the degree of consistency at each of the seven.