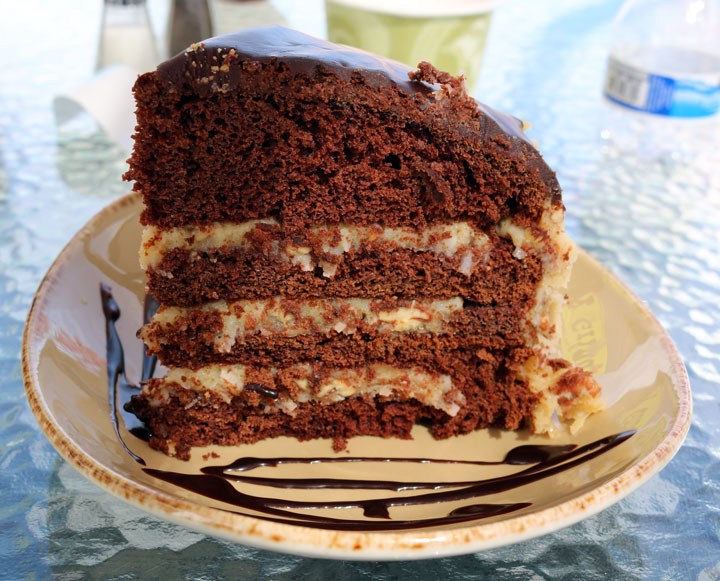 Sometimes–such as when Teri, a faithful reader of this blog, recommended I visit The Daily Grind–being a lexicologist can be a detriment. The first thing that came to mind was the drudgery of the software development project to which I was assigned. Since the 1800s, “grind” has been synonymous with boring, tedious work as in “grinding away.” Why then would I want to visit The Daily Grind when the daily grind was visiting me everyday in the form of SQL databases, configuration scripts and dot-net framework.

My Kim, who’s got all the common sense in the family, clarified that the type of grind to which Teri was referring had nothing to do with the tedium of the dog-eat-dog routine. The Daily Grind Teri recommended is a coffee shop she and her husband consider awesome. The term Daily Grind as used in the restaurant’s name refers to the daily grinding of coffee, a routine prefacing the luxurious indulgence in a steaming cup. The Daily Grind proudly serves Allegro Coffee, a subsidiary of Whole Foods which roasts flavorful coffee from Arabica beans. Two cups of cafe au lait sold me on this coffee.

The Daily Grind has been making the daily grind easier to bear since 1996. For seven years–until September, 2013–the coffee shop operated in the East Downtown district before relocating to the Calibers Center on Cutler Avenue just west of Washington. The Daily Grind is located in a battleship grey corrugated steel building. If not for the signage and picture windows in the restaurant’s storefront, first-timers might think they’ve mistakenly arrived at an industrial complex of some sort. Compounding doubts newcomers might as to whether they’ve reached the right location is that The Daily Grind is sandwiched between I40 on its south and a diversion channel about a quarter mile north. Its next door neighbors are a gun store and pro shop and a fly and tackle shop, not the usual coffee shop neighbors.

The weirdness continues when you discover there is no entrance up front. Instead, you have to navigate a concrete path that takes you past a rock garden with interesting water features. The coffee shop’s entrance precedes the patio where umbrellas provide cooling shade. You can choose to dine in a capacious dining room or, weather permitting, a delightful patio. When you walk in, your eyes will instantly be trained on the glass pastry case in which scrumptious pastries and cookies baked on the premises are on display. This lexicologist also detected exposed grinding gears on the clock just over the window to the kitchen. Two grinding gear mirrors hang on a dining room wall.

The Daily Grind is open seven days a week for breakfast, lunch or dinner. During our inaugural visit we spent at the coffee shop on a unseasonably warm Saturday afternoon, we were surprised both at the eclectic crowd and volume of take-out and eat-in traffic. Our server told us the crowd was a mix of loyal patrons who followed their favorite coffee shop to its new home and newcomers like us. The Daily Grind has all the elements that make coffee shops popular: a friendly, attentive wait staff; an inventive and diverse menu; an attractive milieu; and of course, good coffee.

A multi-page menu includes distinctive breakfast, lunch and dinner items, focusing on traditional American favorites prepared with creative touches. The fourteen item breakfast menu, served all day, includes an array of sweet (pancakes, French toast), savory (Cheddar waffle BLT, breakfast bagel), piquant (huevos rancheros, chile pocket) and healthy (yogurt). The lunch menu includes leafy greens, panini sandwiches or burgers. The dinner menu features only seven items, some of which you might find at a gourmet restaurant. Don’t make your dessert decision based on the menu. You’ve got to visit the pastry case to select the sweet treat that’s just perfect for you. In the three years in between our first and second visit, the menu had changed substantially. As with all good restaurants, changes to the menu are inevitable to keep things fresh.

12 October 2013: Within the sandwich menu, you’ll find only a couple of paninis, but they’re memorable. All sandwiches are prepared on locally baked bread from Le Paris French Bakery in Albuquerque. Sandwiches are served with housemade potato chips or fries and cornichon pickles. The chips are crispy, but not brittle and they’re low in salt. A bowlful of cornichons isn’t enough to sate pickle lovers so the four that accompany your sandwich are strictly a tease.

12 October 2013: As with most sandwich shops in Albuquerque, The Daily Grind offers its own version of The Cubano, the Cuban sandwich or as it might be called in Cuba–a sandwich. Over the years, many liberties have been taken with the Cubano with tradition pushed by the wayside. The Daily Grind’s Cubano is a pressed panini stuffed with ham, turkey breast, pickle, Swiss cheese and cilantro mayo. Many Cubanos are made with mustard which, some might argue, throws off the balance in the sandwich’s flavor profile. The cilantro mayo provides very complementary flavor notes that allow the ham, turkey breast and Swiss to sing.

12 October 2013: On Nancy’s Curried Chicken Salad Sandwich, a baguette is hollowed out and ingredients are stuffed where soft bread innards used to be. The chicken salad is constructed from shredded chicken breast, pineapple, golden raisins, celery and curry mayo. It’s a terrific sandwich with savory and sweet (but not overly so) notes that coalesce into a surprisingly delicious combination. The curry mayo, pineapple and golden raisins provide the sweet elements while the shredded chicken breast lends savory qualities. If you love curry, you’ll love this sandwich. If you don’t love curry, you’ll probably still like this sandwich.

25 March 2017: For those of you who like word play almost as much as you like sandwiches, the “Dressed Up Pear Essentials Panini” will get your attention. Picture white wine poached pear, ham, bacon, Swiss, brie and balsamic reduction on a baguette. The sandwich is a bit on the diminutive size, but it’s huge in flavor and especially in flavor contrasts that complement one another. The crisp, smoky bacon contrasts beautifully with the crispy poached pear while the ham and brie are a marriage made in kitchen heaven. Then there’s the balsamic which lends a slight tang to the entire sandwich.

25 March 2017: New York City’s prestigious Waldorf-Astoria Hotel is not only renowned for its upscale and luxury accommodations, but for its culinary innovations. The Waldorf-Astoria is credited for having invented Eggs Benedict as well as the Waldorf Salad which the hotel first served in 1896. The Daily Grind’s take on the Waldorf Salad, fittingly called “Waldorf – Grand Style,” is a very tribute to the salad made famous at the most famous hotel in New York City. It’s constructed from a mound of baby greens, red and green apple slices, sliced pear, candied walnuts, dried cranberries and raspberry vinaigrette. If you like fresh, invigorating flavors with leafy green goodness and sweet-tangy fruit, this is the salad for you.

12 October 2013: Desserts are truth in advertising. The advertising comes from the glass pastry case under which are displayed some of the Duke City’s most delectable desserts: pies, cakes, cookies and more. The truth comes as your taste buds confirm what your eyes have been telling you. These are absolutely amazing desserts, some of the very best in the city. The French Silk Pie, very much reminiscent of French gateaus, may be the best I’ve had in the United States. It’s smooth, rich and best of all, not too sweet (courtesy of the semi-sweet chocolates). The pie is topped with blueberries which provide a terrific contrast to the chocolate.

12 October 2013: Peñasco’s Sugar Nymph’s Bistro has long held the distinction of serving what I believe are New Mexico’s very best scones. The Daily Grind’s raspberry scones are right up there with Sugar Nymph’s. That’s rarefied air. The Daily Grind’s scones are both moist and crumbly, dense and light, sweet and savory and absolutely addictive. So, too, are the cinnamon rolls which are brick thick with icing spread generously as if by trowel.

25 March 2017: When we espied the German chocolate cake destined for our table, we wondered whether we should eat it or challenge Taos mountaineer Dave Hahn to climb it. Eating it in one seating might prove as formidable as one of Hahn’s twenty-one expeditions to Mount Everest. A taller slab of German chocolate cake we’ve never seen: three layers of thick coconut layered in between moist chocolate and topped by a chocolate ganache. It’s a cake you have to eat in layers, too. We managed to put a dent in it, but had enough left over for two additional desserts.

25 March 2017: If you’re served green key lime pie, there’s a good bet either food coloring was added or the pie mix came out of a box. In the Florida keys, no restaurant can expect to stay in business for long if it serves green key lime pie. Key lime pies should always be pale yellow, usually a good indication that actual key lime juice is used. The Daily Grind’s key lime pie is very reminiscent of those we enjoyed so much when traveling through Florida where the key lime pie has been designated by the state legislature as “the official pie of the state of Florida.” The Daily Grind’s version has a tart, but not lip-pursing, flavor. It’s also very aromatic, another sign of authenticity. One unique feature of this pie is that it’s drizzled with sweetened condensed milk which proves a nice foil to the tartness of the lime.

The Daily Grind is a true respite from the daily grind, the type of coffee shop you’d frequent if it was in your neighborhood or that you wouldn’t mind driving a half hour for, especially with the promise of warm raspberry scones awaiting you.