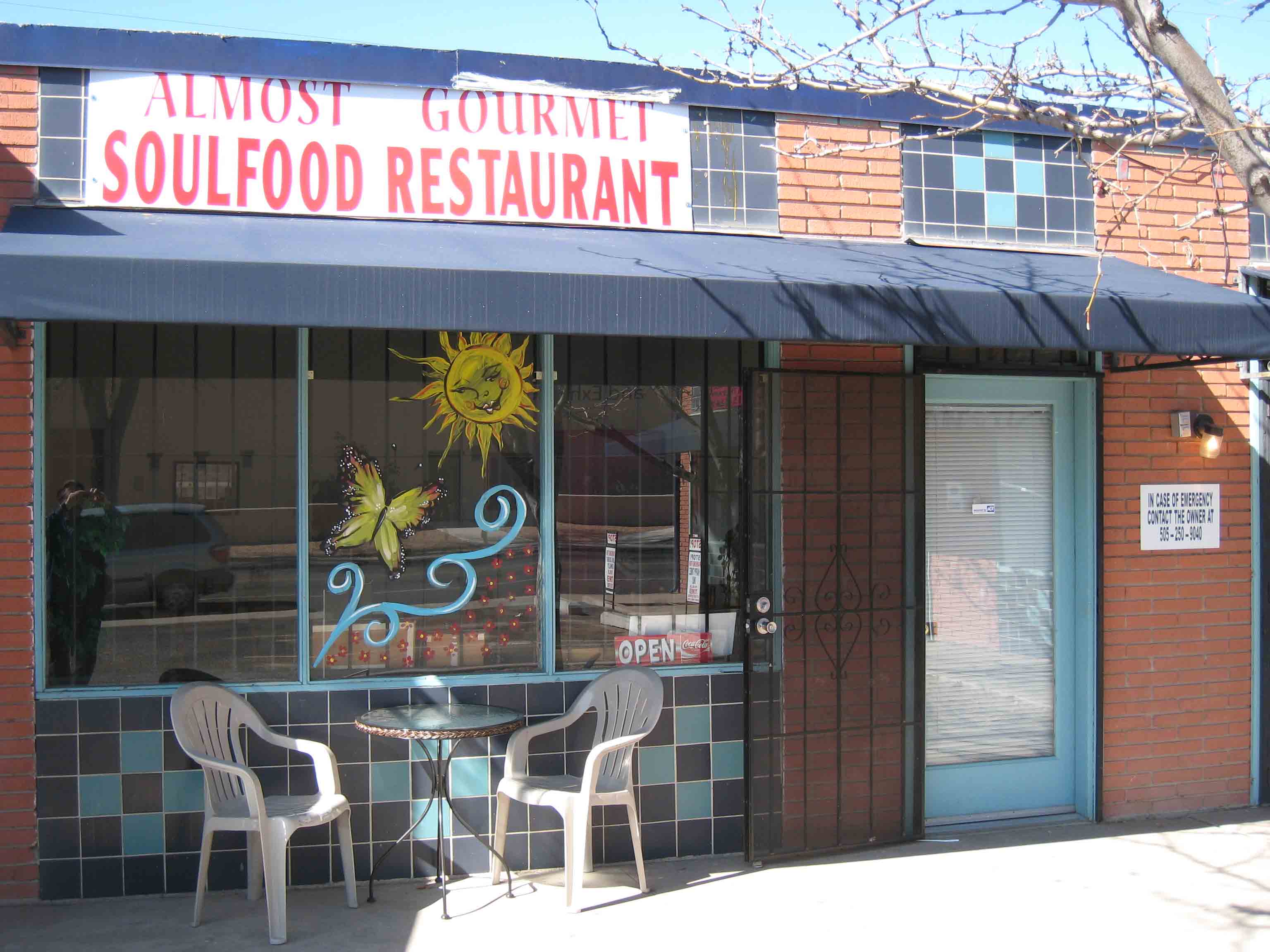 NOTE:  Although the Almost Gourmet Soulfood restaurant is now closed, owner Genice Monroe remains in the catering business, working out of a commercial kitchen in the city.  She is working on a Web site from which you will be able to order the fantastic soul food you fell in love with at her restaurant.  Call Genice at (505) 353-0799 for all your catering needs.

One of my favorite catechism words, concupiscence, might best describe my passion for soul food.  Concupiscence of the body, I was taught, is “the blind tendency of your feelings and animal appetites to seek satisfaction, regardless of intelligence and reason.”

Having lived for nearly eight years on the Mississippi Gulf Coast and within short driving distance of New Orleans, we became intimately, even passionately, familiar with soul food.  It was among our very favorites of any cuisine. To quell our yearnings for soul food (the more authentic the better), we often frequented less than savory” neighborhoods which even Mother Teresa herself might have avoided.  Such “boldly go where no white man has gone before” excursions resulted in our introduction to, among other things, the pit barbecuing of goats, an experience which reminded me somewhat of the matanzas with which I grew up in New Mexico.

Sadly our return to New Mexico would mean dim prospects for finding not just palatable soul food, but any soul food whatsoever.  Since our return to the Land of Enchantment in 1995, we have seen about half a dozen soul food restaurants open to critical acclaim only to close shortly thereafter.  It seems no sooner do we discover a new soul food gem that our hearts are broken by its closure.

We’ve got our fingers crossed that the Almost Gourmet Soul Food Restaurant will buck that heinous trend–even though at month’s end (February, 2009), the restaurant will vacate its San Pedro and Copper premises in search of new digs. preferably on Albuquerque’s burgeoning west side.

The San Pedro area where the restaurant is situated is directly across the street from one of the main entrances to the New Mexico State Fair complex.  This part of San Pedro is very heavily trafficked, but that hasn’t necessarily worked to Almost Gourmet’s advantage.  The restaurant sits back on an inconspicuous storefront location and sometimes southbound traffic is so heavy that it completely blocks northbound traffic’s visibility to the restaurant.  Coupled with an austere parking situation and it’s no wonder the restaurant isn’t better known.

Almost Gourmet Soul Food began as a catering business in 2006 with the restaurant following suit some two years later.  The name “Almost Gourmet” is seemingly a contradiction in terms.  Soul food is generally antithetical to gourmet.  Where gourmet is cuisine, soul food is the kind of stuff ordinary people eat at home every day.  Proprietor Genice Monroe defines soul food as “country cooking.”  It’s what she grew up with here in Albuquerque even though the genesis of her family recipes is the Dallas, Texas area.

Almost Gourmet Soul Food is also antithetical to fast food.  Everything is made from scratch and to order.  Genice will escort you to your table, take your drink order (the sweet tea is exactly the way we grew to love it in Mississippi) and hand you a menu.  When she returns with your drinks, she’ll be happy to answer any questions you may have on the preparation of the entrees on her menu.

It’s a terrific menu replete with smoked, fried, barbecued and gravy-laden entrees all Soul food aficionados love. The most “gourmet” sounding entree is baked salmon, the most hard-core is pig feet.  There are main entrees such as fried pork chop dinners and catfish plates.  There are also sandwiches and stews.  Because she grew up in the Duke City, Genice even offers red or green enchiladas with beans, probably not the most frequently requested item on the menu.

That honor probably goes to the fried chicken dinner–two hulking pieces of juicy Southern-fried chicken with a brittle, lightly peppered crust.  This is chicken the way it’s supposed to be made–a 20-minute preparation time ensures it arrives at your table at the height of juiciness and fried to a golden sheen.  Cut into the crust and steam wafts upwards with the aroma of pure deliciousness.

The Mac and cheese is terrific–artery-clogging cheese coagulating around perfectly cooked macaroni. The best parts are where the cheese has just a bit of crust.  The fried okra, a simple Southern classic, is lightly breaded to a golden sheen that leaves it just slightly crispy.  On the inside, it’s soft, chewy and terrific.

Another must-have entree is Almost Gourmet’s BBQ babyback pork ribs (the most expensive entree on the menu).  The ribs are slathered in a slightly vinegary tomato-based sauce with just a hint of sweetness.  These are meaty, fall-off-the-bone tender ribs with nary any fat.  These are the type of ribs you want about a dozen of.

A dozen visits (at least) to Almost Gourmet is what the future should bode for savvy soul food lovers–should Genice decide to reopen her restaurant.  In the meantime, her catering business will continue to please Duke City soul food fanatics.  This is soul food too good not to find a good home, hopefully one close to me.