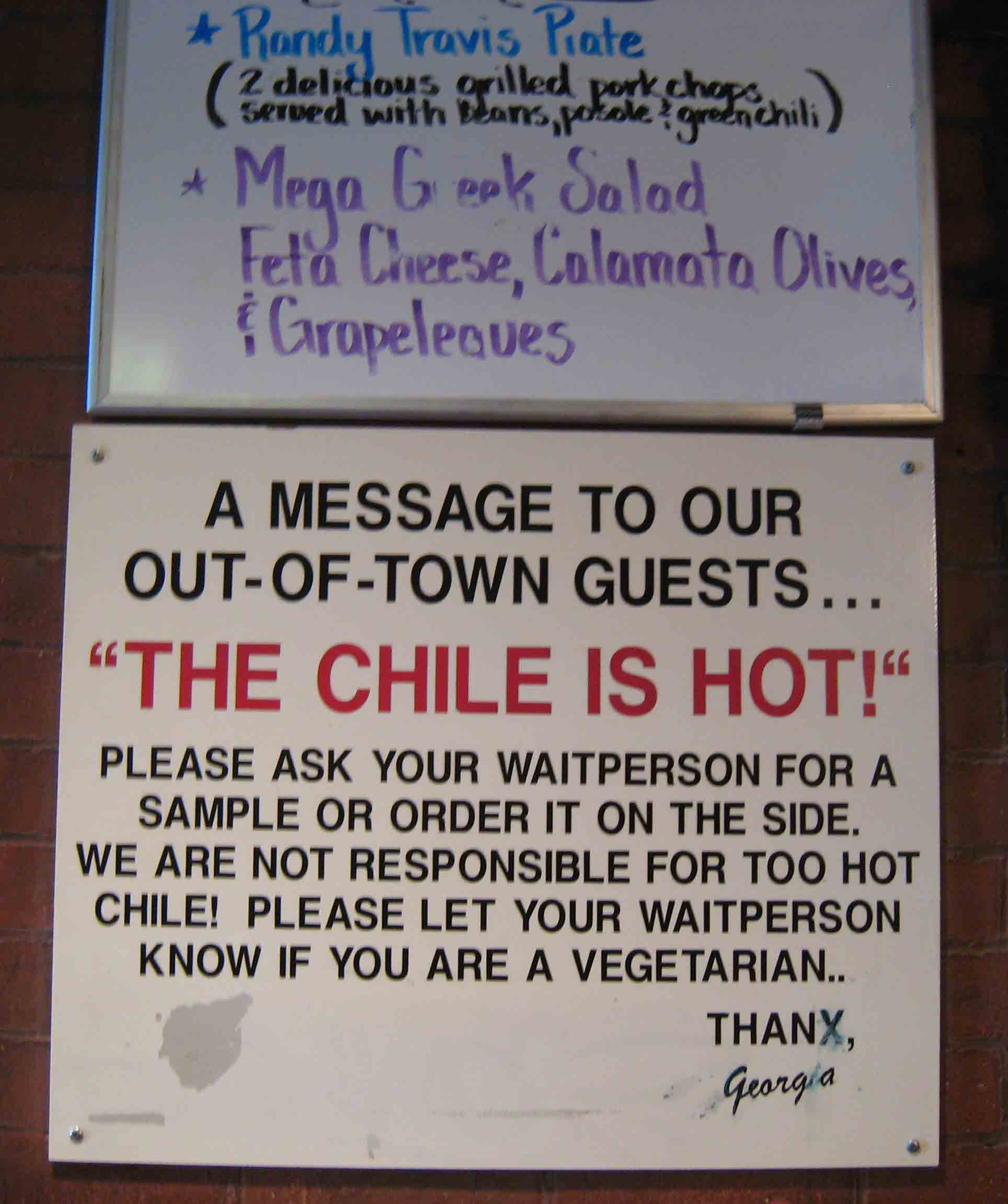 The decade following America’s Civil War was one of burgeoning expansion westward with railroads leading the way.  Railroads helped open up the Wild West which included the then territory of New Mexico.  They transported wool, hides, piñon, lumber, coal, chile and other agricultural products.  They served as “connectors” between villages, towns and pueblos.  They bridged cultures and transcended distance, traversing through rocky promontories, barren mesas and fecund river valleys.  Railroads spread the news, enlightened the culture and introduced modern amenities to outposts separated by miles and time.

The long defunct Denver and Rio Grande Western Railroad (DRGWR) even had grandiose plans to connect Denver, Colorado and Mexico City  with its narrow-gauge railroad.   During its halcyon days, the 125-mile, seven-hour branch from Antonito, Colorado to Santa Fe, New Mexico earned the sobriquet “The Chile Line” in recognition that much of the freight it hauled was chile peppers. The railroad reached Santa Fe in 1881, but never went further south.  By the 1930s, the decline in the demand for lumber and competition from buses and trucks reduced traffic on the line greatly and on September 1st, 1941, the Chile Line departed Santa Fe’s Guadalupe Station on its final northbound run.

The southern terminus of the Chile Line was a red brick station house constructed in 1904.  Today that station house is the home of Tomasita’s, one of the most popular New Mexican restaurants in Santa Fe.  Tomasita’s prides itself on authenticity, preparing its cuisine using recipes handed down for generations.  Those recipes have borne witness over generations to the melding of cultures once dependent on the agrarian products of the area–chile, beans, corn and more–all transported on the Chile Line.  Tomasita’s serves over 80,000 pounds of chile every year, every ounce of that having been grown in New Mexico.  Both red and green chile are beloved by locals and critics alike.  It’s a chile for which warnings are posted for out-of-town guests in bold red proclamation: “The chile is hot!”  Please ask your waitperson for a sample or order it on the side.  We are not responsible for too hot chile!

It’s also a chile recently heralded on the air and in print by The Food Network and Bon Appetit magazine respectively.  During a 2008 visit to Santa Fe for a taping of Rachael Ray’s Tasty Treats, the megawatt Food Network personality proclaimed Tomasita’s a local favorite for its chile (more on the local favorite theme later).  The Food Network also gave Tomasita’s plenty of love in an episode of “Heat Seekers” which first aired in August, 2011.  Hosts Aaron and Roger Mooking tested their masochistic mettle by sampling some of the city’s most piquant plates.  Tomasita’s was their first stop.  Though the carne adovada didn’t exactly water their eyes with its incendiary qualities, the hosts certainly enjoyed it.

In its January, 2009 print edition Bon Appetit magazine named Tomasita’s one of America’s “best chili spots.”   Alas, it was the exclusive “chile” named in the company of purveyors of “chili”  in such hot beds of pepper piquancy as Seattle, Washington; Washington, D.C., Cincinatti, Ohio;  Springfield, Illinois and New York City (which reminded me of a Pace Picante sauce commercial in which a city rube was strung up for bringing New York City salsa to a campfire).  The passing of time didn’t quell Bon Appetit’s ardor for Tomasita’s chili (sic) which published the same article in 2009–only this time on its Web site.  Bon Appetit declared, “This is one of the best places to try stew-like New Mexican green chili (named after its green Hatch chiles), filled with your choice of pinto beans, posole, beef, chicken, or cheese. A crispy sopaipilla (puffy fry bread) comes on the side.”   It made me wonder if anyone on the magazine staff had ever actually tried Tomasita’s green chile.

Savvy New Mexicans don’t need a national publication to tell them about New Mexico green chile though if we do want validation of our opinions, we trust local publications such as the Santa Fe Reporter and Santa Fean magazine to tell us, to no one’s surprise, that Tomasita’s chile is a perennial “best of” award winner in their respective annual polls.

The greatness of Tomasita’s chile is validated by the hordes of patrons lining up half an hour before the restaurant opens up to get seated.  Most of them don’t mind waiting for a table.  The waiting area is spacious and you’ll invariably run into other prospective guests debating the official New Mexico state question “red or green” and its manifestation in the entrees at Tomasita’s.  The crowds range from locals who visit Tomasita’s two or three times a week to eager tourists, some of whom were introduced to the restaurant by Rachael Ray and others who pilgrimage to Santa Fe as often as they can.  My friend Joey Martinez , a Santa Fe native, owns a BMW in part because it gets him from Albuquerque to Tomasita’s quickly.

There are some vestiges of the century-old red station house still visible, but you have to look for them.  It is a brightly illuminated restaurant with chandelier lighting suspended from a high ceiling buttressed by massive beams.  Hanging plants are suspended from those beams while red chile ristras hang on the vintage red brick walls.  Though Tomasita’s has been visited by a veritable compendium of glitterati–Linda Ronstadt, Arnold Schwartzennegar, Hillary Clinton, Don Imus, Shirley McLaine and others–there are no  framed autographed photographs of any of them on the walls.

Despite its reputation as a nonpareil purveyor of chile, the menu has some interesting departures from New Mexican cuisine.  Appetizers include stuffed grape leaves (the owner is the daughter of Greek immigrants), deep-fried chicken wings, mushroom caps and shrimp cocktail while the entrees include something called the Randy Travis plate–two grilled pork chops with posole and refried beans with green chile and cheese.  Travis, a country music superstar and long-time Santa Fe resident, also has a dining room named for him at the restaurant he apparently considers a favorite.

Unfortunately, the salsa is one of two menu items (the other is carne adovada) desecrated with that accursed demon spice cumin.  Interestingly one spice you won’t see on the entrees is cilantro.  The emphasis is regional with an emphasis on red and green.  That’s the way it’s been since Georgia Maryol founded Tomasita’s nearly four decades ago, albeit in a Hickox Street location that today houses the Tune-Up Cafe.  She purchased the Denver and Rio Grande Railroad building and moved in to the restaurant’s current location in 1978.

Lack of salsa not withstanding, there are plenty of delicious preprandial options including guacamole and blue corn tortilla chips.  The guacamole, served in a crisp corn tortilla fashioned like a bowl, is unctuous and thick, a complement to the formidable low-salt chips.  The guacamole is ameliorated with onions, tomatoes, garlic and salt.  Unlike at some restaurants, sheaves of shredded lettuce aren’t hidden under the guacamole to give you the impression you’re getting more than you actually are.

Enchiladas are always a good benchmark for New Mexican food in general and chile specifically.  Tomasita’s enchiladas are served Northern New Mexican style–flat with Monterrey Jack cheese, pinto beans and your choice of red, green or vegetarian red or green chile (although savvy diners will opt for both red and green).   You also have the option of cheese, ground beef, chicken or shrimp enchiladas with or without a Taos fresh egg.

The ground beef is seasoned wonderfully and layered generously atop a corn tortilla.  The red chile is intensely flavored without being overly piquant, complex without confusing your taste buds with spices and additives that shouldn’t be there.  The green chile is the essence of freshness.  It is roasted to perfection and has a fruity redolence with a tongue-tingling piquancy New Mexicans love.   It’s no wonder this chile is beloved!  The piquancy of that chile is undoubtedly one of the reasons margaritas are so popular at Tomasita’s which serves 20 to 40 gallons of the tequila based cocktail per day depending on whether served on a weekday or weekend.   The margaritas are reputed to have a siesta-inducing potency.

Daily specials include carne adovada on Fridays.  On Saturday it’s Carnitas Antonio, tender strips of beef marinated with onions and green chile cooked in a special sauce and served with Spanish rice and refried beans.  This has the look and taste of New Mexican comfort food, albeit covered in brown sauce instead of red or green (some might consider that sacrilege).  The beef is as tender as Mother Theresa’s heart, not at all leathery like some fajita meat tends to be.  The sauce is rich and delicious.

Normally sopaipillas with honey are all New Mexicans need for dessert, but when piñon cheesecake is available not even a paragon of saintly patience like San Pasqual can resist.  Everything–from the Graham cracker crust to the rich, thick caramel–on this cheesecake is made in-house.  This is a dense cheesecake, a far a departure from those waxy facsimiles some restaurants serve.  The piñon is intense–sweet with a subtle hint of pine that will transport your mind and taste buds to New Mexico’s pine forests.

There are many reasons Tomasita’s is a favorite of locals and visitors alike and they’re not all related to the superb quality of red and green chile laden entrees.  Service is absolutely impeccable, portions are reasonable and prices are fair.   When you serve in excess of a quarter million meals a year as Tomasita’s does and greatness permeates your operating model, the term local institution is bandied about.  Tomasita’s is a local institution!