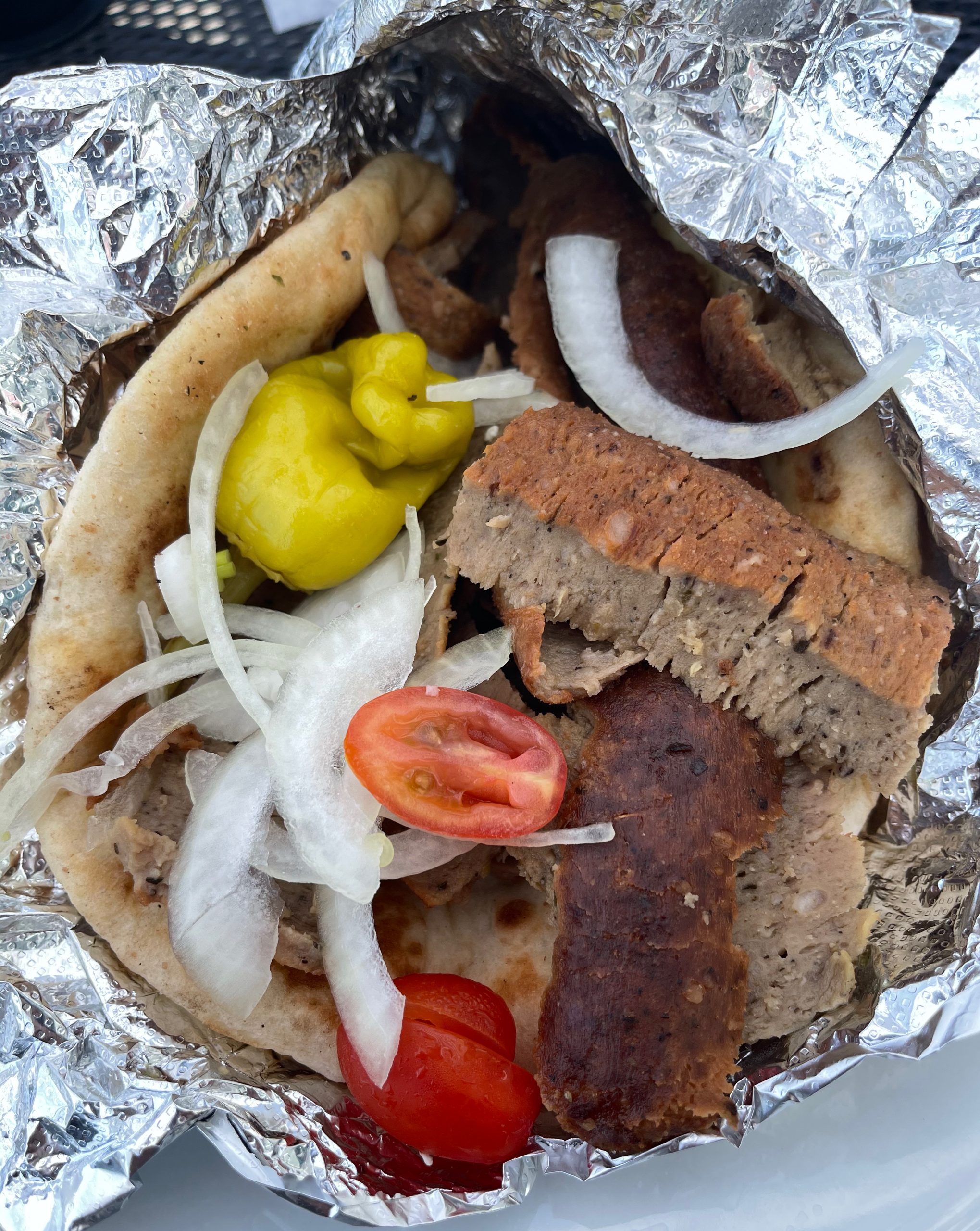 It’s not easy being a gastronome about town when you make less than a thousand dollars a month and have a car payment, rent and a social life. Stationed at Kirtland in the early 1980s, my Air Force salary pretty much dictated that most of my meals were at the base’s chow hall (which thankfully was legions better than mystery meat meals at the Peñasco High School cafeteria). The little that was left of my meager monthly take-home pay meant social outings were pretty much of the cheap eats variety.

The epicenter for many of my off-site meals seemed to be Cornell Drive where it was possible to find restaurants with a broad socioeconomic appeal–restaurants which nurtured a refreshing open-mindedness toward the cuisines of the world. Within easy walking distance of one another on Cornell, you could find battleship sized slices of pizza at Nunzio‘s (now Saggio’s), the very best lamb burger and green chile stew in the world at the long defunct Sheepherder’s Cafe, half a city block of full-contact eating at the Frontier Restaurant and a gourmand’s paradise of Greek food at Gyros Mediterranean.

Though my first two years in the Air Force (happily served in the Boston area) introduced me to Asian cuisine of every type, I was virginal when it came to Greek food until returning to Albuquerque and discovering Gyro’s Mediterranean on Cornell. Back then, this was the place to go for the eponymous gyros, a popular Greek sandwich. Gyros, a blend of lamb, beef and aromatic herbs and spices is grilled slowly on a vertical spit then sliced thinly into a pita which is topped with tomatoes, onions and tzatziki, a savory yogurt sauce loaded with garlic and cucumbers. Both Gyros Mediterranean and I have grown up and out since then.

Gyros Mediterranean has been a paragon of quality, deliciousness and continuity for the more than 40 years it was owned and operated by Bill and Michele Hantzopoulos.  They retired on August 17, 2020.  That’s when they transitioned ownership to Panos and Miranda Marmaras, the  first and only people they reached out to when they made the decision to sell the the restaurant.  They had every confidence Panos and Miranda would maintain the extraordinarily high standards they had perpetuated for four decades.  For Panos, a native of Athens, Greece, owning a restaurant was the culmination of years of preparation and training.

When he moved to New Mexico with Miranda in 1999, Panos steadily climbed the proverbial career ladder–from the bottom rung on up.  He started as a host at Yanni’s Mediterranean, then busser, server, and finally manager before moving on to manage El Patron.  His career progression was largely under the tutelage of Nick Kapnison, the renown godfather of Albuquerque’s Greek restaurant community.  There was no one better to learn from.  Ironically, restaurant management was not what Panos initially set out to do.  Panos attended chef school in Athens, Greece for a year after high school but while working at a café, he quickly realized he was more drawn to the front of the house.

Miranda, an outstanding Technical Analyst at the University of New Mexico’s Information Technology (IT) department won’t be involved in the restaurant on a day-to-day basis, but she’s a brilliant idea person and a true life and business partner to Panos.  No wholesale changes are in the offing for either recipes or the menu, but Panos is definitely putting his stamp on both.  Thus far, Panos has changed the salad dressing and added a vegan option.  He is making the moussaka and pastitsio in-house and has added traditional Greek dips Melitzanosalata (eggplant dip) and Tyrokafteri (spicy feta jalapeño dip).  He also plans on adding (my favorite) Taramasalata   (an addictive dip made from fish roe and often referred to as “poor man’s caviar.”)  He has also added lamb, pork, and chicken souvlaki.

Panos and Miranda are also looking into adding a stacked pork gyro similar to al pastor but marinated in Greek spices.  The current gyro is an amalgam ground lamb and beef but Panos would like to offer both options in the future. Panos has also added some Greek coffee options, a frappe, traditional Greek coffee, and are going to be expanding into espresso drinks soon. As for the beer and wine license, they have received the zoning from the city but are still in the process of finalizing paperwork for the State.  It will probably be 3-4 months before that takes off so hopefully just in time for warmer weather and indoor dining if all goes well and Covid risks lessen.

20 March 2021: Panos and Miranda were taking a rare day off on the Saturday of our inaugural visit.  Cosmetic changes were readily apparent.  The dining room seemed brighter and more airy, the food preparation area more organized.  Several tables were placed on the sidewalk fronting the restaurant.  Because it had been months since our last visit, my Kim and I both opted for our very favorite gyro under spacious skies, a double-meat gyros.  We noticed several changes right off.  The pita is thicker, more capable of holding in the profusion of ingredients.  Though it’s still advisable to pluck off a few shards of meat, that’s a task you’ll undertake happily.  The superbly seasoned shaved lamb-beef amalgam is also thicker and just as moist as ever.  Instead of sliced whole tomatoes, the gyros were garnished with delicious cherry tomatoes.  Tzatziki, as fresh and flavorful as we’ve ever had, was served on the side.  It takes two hands to handle this behemoth sandwich with flavors as majestic as the Parthenon.

Appetizers (mezedakia) play an important role in the Greek table. Most Greek appetizers are salty or piquant (or both) and are often accompanied by ouzo (a clear anise-flavored liqueur). By tradition, appetizers are meant to be eaten slowly and while they are quite delicious, their traditional purpose remains to make drinking ouzo easier. Although Gyros Mediterranean doesn’t serve ouzo, appetizers themselves are cause for celebration.

By far, the very most popular side dish or appetizer at Gyros are the patates, thinly sliced homemade potato chips served warm. They’re not quite as thin as conventional potato chips, but they’re so much better tasting, so much better than any you’ll find at any grocery store. Don’t dare desecrate these chips with ketchup or vinegar or any other condiment.  Because she’s a vegetarian, Miranda can’t enjoy so many of the meat-based dishes on the menu, but she loves the patates.  So does everyone we know.  They’re fabulous!

Among our favorite appetizers is one that may sound somewhat unconventional to the American palate.  Greeks have long used potatoes as a vehicle for complementary ingredients. In Skorthalia, an appetizer at Gyros Mediterranean, potatoes served cold and the consistency of mashed potatoes are blended with lemon juice, garlic, olive oil and white wine. The tart-savory potatoes spread easily onto the pita bread and make for a delicious starter.  We weren’t able to finish our skorthalia and were happy to learn it seemed to improve with time and it was pretty darned good to begin with.

Though this gastronome about town can now afford more than the cheap eats of my youth, I still return often to Cornell where some of the deliciously diverse diners that sated me in my poverty are still appeasing patrons of every wallet size.  Panos and Miranda Marmaras continue in the tradition of restaurant pioneers on this storied street, enthralling new freshmen cohorts at the University and the rest of us with outstanding Greek cuisine.

One of the most popular is the aptly named mezedakia (small plates of tasty morsels or appetizers). At Gyros, the featured tasty morsels are dolmades (vine leaves stuffed with aromatic rice), feta cheese, Kalamata olives and pita bread (all pictured below). The dolmades, although fresh and well seasoned, have a “canned” taste (very few restaurants make their own any more). The feta is of the wonderful breath-wrecking variety, definitely not recommended for a hot date. The Kalamata olives are mouth-watering with a briny flavor and meaty texture. The pita is unfailingly warm.

5 December 2015: The saganaki, a slab of bubbly Green Kasseri cheese served with pita is far superior to the de rigueur cheesy fried mozzarella offered at chain restaurants. Crisp on the outside, soft and gooey on the outside, it is expertly pan-fried at your table then extinguished with a squeeze or two of lemon. As with other Greek appetizers, saganaki is designed to be consumed in small amounts, as part of a large spread of small dishes. The saganaki by itself won’t fill you up, but it will leave you sated.

Another intensely flavored appetizer is tarama, a carp roe spread. I’ve heard tarama referred to as a “poor man’s caviar” and while I wouldn’t go that far myself, tarama is one of the most delicious things you can spread onto a piece of warm pita bread. The name for this dish is derived from the Turkish taramas, which means “preserved roe,” and salata, Italian for “salad.” The dish is made by blending the roe with olive oil, garlic, and lemon juice to create a smooth, creamy paste, then adding body to the paste with mashed potatoes or moistened breadcrumbs.

Some entrees include sides of Pepperonici and Kalamata olives, both of which are delicious. The Greek salad includes huge chunks of feta cheese, a sharp, fetid fromage. It also features red, ripe tomatoes, lettuce and a tangy Greek dressing that will awaken your taste buds. As with the gyros, the onions used on the salad are white onions which are much more flavorful than the seemingly more popular red onions.

Dessert options include a bevy of baklava or baklava-like sweet treats, most resplendent in a honey sheen. A nice alternative is the tongue-twisting Galaktoboureko, an inspired custard pie sandwiched between flaky phyllo dough baked until golden then drenched with a citrus-infused syrup. Don’t buy the Homeric myth that the Trojan War started over Helen of Troy, the face that supposedly launched a thousand ships. the Trojan War started over Galaktoboureko, an epic dessert!