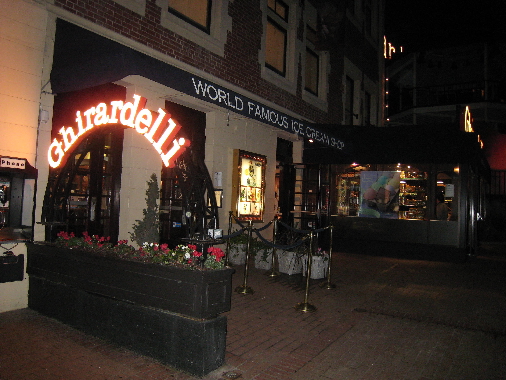 While Ghirardelli chocolate is available worldwide, there are only a few shop locations–mostly in California with outliers in Las Vegas, Chicago and in two Florida cities.

Named after Italian chocolatier Domingo Ghirardelli who brought his chocolate from Peru to San Francisco, Ghirardelli Shops are a true chocoholics dream where you can purchase a tempting assortment of chocolate confections and gifts.

equipped with chocolate making equipment so you can see artistry at work.

Truly one of the most progressive cities in the world, Las Vegas has a Ghirardelli chocolate shop near Harrah’s.  It’s designed like an old-fashioned soda shop with a checkered floor, ceiling fans and a long counter at which you place your order.

Detractors might say, these soda fountains are also staffed with soda jerks, emphasis on the word “jerk.”  On a hot summer day, it’s obvious the staff wants to get you in and out quickly.

The menu is replete with decadent ice cream sundae masterpieces, floats, malts and shakes, some of which are named for San Francisco area landmarks such as the Golden Gate Bridge and Alcatraz.  There’s also a sundae called the “Domingo” named for the shop’s founding father.  Perhaps not in such good taste (but it sure tastes great) is a sundae called the “Earthquake” which is meant to be shared.  Other clever sundae sobriquets are the “Strike it Rich,” “Fog Horn” and the “Cable Car,” all of which are heavenly.

The goblet on which sundaes are served is piled high with ice cream and hot fudge or caramel as well as other ingredients such as bananas, nuts and whipped cream depending on which sundae you order.  Invariably you’ll make a mess out of your table as the contents of the overfull goblet crawl down the side of their vessel the second you insert your spoon.  You’ll also go through several napkins as you consume these tempting treats.

Both Ghirardelli Square and Las Vegas have charms all their own, but on a balmy summer day, Ghirardelli’s offerings might taste even better in Sin City.  They’re the perfect “beat the heat” treat.