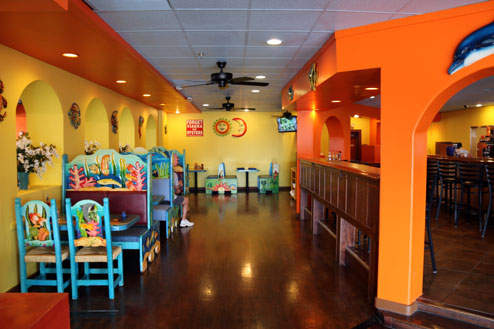 While New Mexico has always had restaurants featuring the cuisine of the country of Mexitli of Tenochtitlan (Mexico), the distinction between Mexican and New Mexican cuisine has always been somewhat obfuscated.  There are a number of reasons for this.

For as long as I remember, restaurants which serve cuisine we now recognize as uniquely New Mexican (characterized among other things by the use of piquant red and green chiles instead of jalapeno) have billed themselves as Mexican restaurants.  The term “New Mexican food,” is, in fact, relatively new as the Land of Enchantment has more recently taken an active stance in promoting its cuisine as something distinctly delicious and different than Mexican food.

The situation has been exacerbated by ancianos (New Mexico’s elderly population), even the descendents of Spain, many of whom refer to their cuisine as “Mexican.”

It may be too early to prognosticate 21st century dining trends, but one that seems apparent is the introduction of diners to Mexican restaurants featuring cuisine from other than the northern Mexican states which specialize in the foods with which Americans are accustomed–burritos, enchiladas, tacos and the like.

This trend includes high-end restaurants such as the fabulous Los Equipales, a fine-dining establishment patterned after some of the fine cosmopolitan restaurants of Mexico City. It also includes several mariscos restaurants serving the delicacies caught in Mexico’s beautiful and varied coastal waters.

In November, 2006, Nora Lopez and Luis Ortega  launched the first Duke City installation of their popular family restaurant–Mariscos La Playa (literally seafood the beach). Restaurants of the same name under the same ownership already exist in Santa Fe and Espanola.

Like their northern siblings, Albuquerque’s Mariscos La Playa is awash in a veritable spectrum of color, particularly of soothing azure shades the color of Mexico’s Pacific coastal waters.  Thematically, the restaurant resembles a beachside resort on a coastal Mexican vacation spot complete with palm trees painted on the walls near fishing nets.

Many of the intricately carved chairs feature a hazel-eyed sun peeking out from behind verdant hills. Others of the tightly woven twine chairs include colorfully painted leafy green foliage, resplendent toucans and parrots and lush ripe fruits.

If you’ve been to any of the Ortega family Mexican restaurants, the menu is certainly familiar–and not just because it features a multi-page boatload of fresh Mexican seafood. The menu is shaped like a plump blue snapper.

As with its predecessors, the service at Mariscos La Playa is impeccable with one of the most attentive and polite wait staffs around–a hallmark of the family restaurants. Better still, the wait staff makes sure there’s no surcease to the salsa and chips or the incomparable creamy avocado-based dip that is at least as good as most of the very best salsa served at other Mexican restaurants in New Mexico.

The avocado dip is indeed something special. It melds sour cream, ripe avocados, tomatoes, onions and jalapenos into a creamy concoction that you might dream about the evening after consuming it. The version at Albuquerque’s Mariscos La Playa is unfailingly creamy but varies in piquancy depending on the potency and quantity of the jalapenos added.  It’s terrific on chips or as an additive to any entree.

A wonderfully piquant and obviously fresh pico de gallo style salsa sometimes accompanies the avocado dip, both of which are served with a basket of crisp corn tortilla chips which also includes saltines (they go surprisingly well with either the salsa or the dip).  The chips are somewhat salty.

Mariscos La Playa is no two salsa restaurant.  In 2008, the restaurant added a hot bean salsa that resembles a bean soup.  It’s far better than the refried bean dip packaged by Frito Lay.  It’s somewhat watery–like the brownish broth at the bottom of a bean pot after the beans have been extricated–with small bits of mashed pinto bean.  A few more beans and slightly less broth would have made it even more delicious and certainly neater for your attire.

A fourth salsa is a more conventional tomato, onion and jalapeno concoction with a fiery disposition and a delicious flavor.

The horchata is served in one of the biggest, thickest glass goblet we’ve ever seen (the Ortegas must have cornered the market on these goblets which are also found in their other restaurants). Weighing as much as a small dumbbell, the goblet is a perfect host to the quintessential Mexican beverage, a refreshing and delicious cinnamon-blessed treat.

The start of a memorable meal might include tostadas de ceviche crafted from crispy (yet formidable enough to support handfuls of seafood) tostadas first layered with mayonnaise then heaped with either shrimp or a seafood combination, cilantro, onion and chopped tomatoes. It’s a colorful and delicious appetizer you can also have as an entree in which it comes as an order of three.

If it’s true that men really are genetically predisposed to salivate at the aroma, taste or mention of bacon, male diners should try the Discada Norteña, grilled diced beef with bacon, onions, tomato and white cheese served with corn tortillas, lettuce, tomato and avocado.

While all the ingredients go together very well, it’s the bacon that comes across as the prevalent taste–and that’s not at all a bad thing. This entree comes in portions for one or for two and is served in a flat, circular pan with a can of Sterno to keep it warm (at some point, turn off the Sterno or your bounty will cake up at the bottom).

Another excellent entree (and I normally never recommend them) is the fajitas bravas, made with a combination of beef and chicken as well as grilled red, green and yellow peppers, grilled onions and grilled jalapenos. I emphasize grilled because many restaurants serving fajitas serve vegetables which most definitely haven’t been grilled long enough (think al dente or worse). The grilled jalapenos are a special treat and probably account for the name “bravas.” These are among the very best fajitas in Albuquerque.

Mariscos La Playa offers an array of camarones (shrimp) entrees, some of which are unique and untried elsewhere in Albuquerque.  One of these entrees is camarones tropicales (tropical shrimp), a dozen shrimp bathed in a tropical fruit sauce.  Most readily apparent in the sauce are coconut and orange.  The sauce is very sweet, somewhat akin to the sweet fruitiness of a LifeSavers candy.  Despite the color, there’s very little tanginess from any orange in the sauce which has the look and feel of baby food.  Despite the lack of tang, the sauce goes surprisingly well with the shrimp, particularly if you also add the guacamole salsa to the mix.

Many entrees are served with a fluffy white rice with a nice buttery taste and with Texas sized French fries that appear to have been double-fried.  They’re crisp on the outside and soft on the inside.  Rather than ketchup, however, dip these fries in one of the salsas (the bean dip is an excellent choice).

Entrees are also served with your choice of tortillas, either corn or flour.  The flour tortillas are thick and have the color pattern of a pinto pony with the unmistakable char impressed by a comal.  The corn tortillas are pliable and delicious with a pronounced corn taste.  Both tortillas are served in a tortilla warmer which keeps them steamy and warm.  It will take a few seconds before you can fill them.

The tortillas are perfect vessels for such entrees as the Mariscada Caliente, a mixed grill of fish, shrimp, scallops, calamari and octopus.  You can easily craft five or six engorged tacos with the seafood bounty on the metallic grill on which it is served.  The seafood is tender without being mushy and succulent without being “fishy.” In fact, the seafood is surprisingly fresh considering the distance from landlocked Albuquerque to the coastal waters of Mexico from which the seafood was plucked at its height of freshness.  Squeeze a few limes on top of the seafood for a different experience.

In 2008, Albuquerque The Magazine accorded a “Hot Plate” award to yet another entree at Mariscos La Playa.  That entree is Salmon Ala Reyna (salmon for the queen), a grilled salmon topped with a blend of white cheeses and “the jewel of the crown, smoked bacon.”  The white cheese is Queso Chihuahua or Queso Menonita, named for the Mennonite communities in northern Mexico which first produced it.  It’s one of the restaurant’s most popular entrees.

Portions are prodigious at this Route 66 restaurant, but you should try to save just a bit of room for dessert.  Pastel Tres Leches (three milks cake) is one of the restaurant’s most popular post-prandial treats, but Mariscos La Playa also offers up a unique variation on flan.

The chocolate flan (pictured below) is a chocolate cake topped with a caramel flan sprinkled with nuts.  Using flan as a sort of frosting or cake topping isn’t a unique concept, but it’s not always executed that well.  At Mariscos La Playa, this dessert is done well.  The cake is rich and moist and the flan a perfect crown of decadence without being overwhelmingly cloyinng.

Central Avenue is certainly closer for Albuquerque diners than Santa Fe and Espanola. That portends many visits to another wonderful Ortega family enterprise–Mariscos La Playa, now and at last in the Duke City!