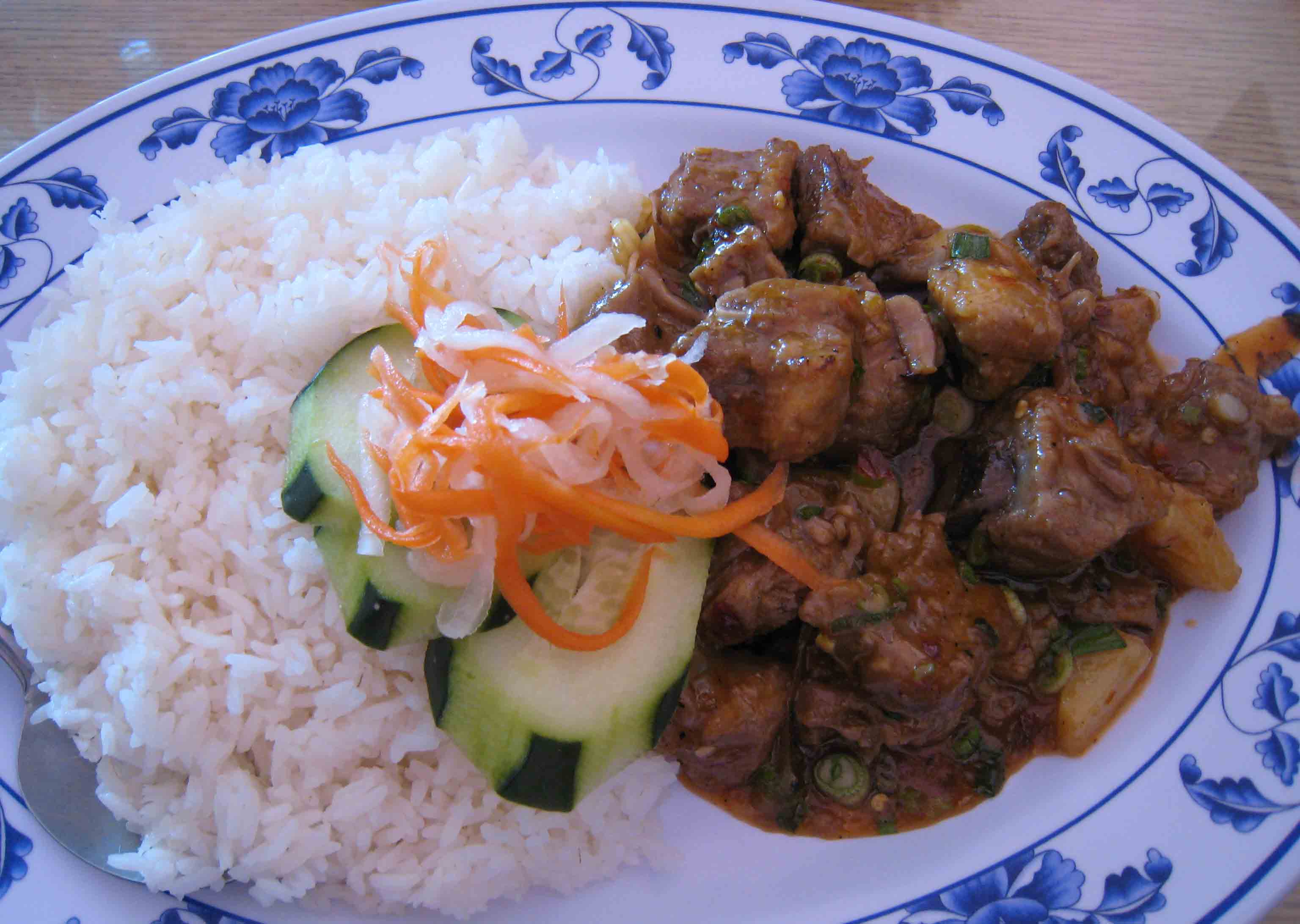 In late 2002, long-time proprietor and friend James Nguyen sold May Hong.  Fortunately he kept this wonderful jewel in the family, selling it to his lovely and talented sister-in-law. Best of all, he didn’t relinquish ownership until fully ensuring she could perfectly prepare the recipes that have made May Hong one of the two or three best Vietnamese restaurants in the Duke City.  That short list, by the way, includes James’ second restaurant Cafe Dalat.

May Hong (along with Saigon Vietnamese Restaurant) is somewhat of an anomaly in that it’s not located anywhere near Albuquerque’s tightly-knit Vietnamese neighborhoods, most of which seem to be concentrated on the city’s southeast quadrant.   Though situated on bustling Montgomery Avenue, you’ll forget the cares of the world the minute you step into the dimly lit restaurant, take in the dulcet tones of a very soothing Vietnamese music track and sit in one of the comfortable and enveloping booths.  Roughly translated as “Pink Horizon,” May Hong interestingly has a color palate of red, white and green, the colors of the Italian flag.  White walls trimmed in red and green are festooned with Vietnamese artifacts and framed prints depicting life in Vietnam.  Large tropical plants add to the relaxing milieu.  The service is warm and attentive.

There are more than 100 items on the menu, a veritable compendium of just about everything that makes Vietnamese cuisine among the very best in the world.  Anthony Bourdain once wrote “I think I’ve gone bamboo.  I’ve gone goofy on Vietnam, fallen hopelessly, hopelessly in love with the place.”  For me, it’s not love at first sight since these eyes have never beheld the jewel of the Orient syndicated columnist Robert Scheer called “one of the most marvelous places in the world.”  It’s been love at first aroma, sip and bite of its incomparably intoxicating cuisine since 1977 when grilled beef first crossed these lips.

It was love at first aroma the first time May Hong’s steaming spicy beef soup wafted upward with its siren-like call to luxuriate in its flavorful complexity.  It was love at first sip the first time a brimming spoonful of this inviting elixir tantalized my taste buds.  Served in a swimming pool sized bowl, the spicy beef soup is redolent with the flavor of concordant spices working in synchronicity to give this soup a piquant, spicy and savory taste.  The addition of pineapple chunks gives it a slight tang while the thinly sliced eye round and beef brisket provide saltiness.  The round rice noodle is thick and always perfectly prepared.  Each luxuriant bowl of pho is accompanied by a plate decorated with jalapenos, bean sprouts, basil leaves and cilantro which you’re free to add to the pho.  The basil leaves give the pho a refreshing flavor.  Soups (phos) are the most popular food in Vietnam and are most commonly eaten for breakfast, but are great any time of day.

Pho, pronounced “fuh”, a Vietnamese Noodle Soup often referred to as “Vietnamese soul food,” is an elixir that warms, comforts and nourishes both the body and soul.  That’s something May Hong’s curry stew with vermicelli exemplifies.  Some of its ingredients (peas, carrots, potatoes) sound like what many Midwestern mothers might add to their own stews, but at May Hong, the addition of sweet curry, raisins and Vietnamese spices in perfect proportion to one another, make this a spectacular stew.

May Hong’s Vietnamese sandwich (banh mi thit), also known as the Vietnamese po’ boy, on French baguettes is every bit as beguiling as the pho.  The banh mi (a phrase which refers to both the bread and the sandwich) starts with a lightly toasted seven-inch French baguette that is soft on the inside with a slightly crunchy crust.  The baguette is sliced lengthwise and on one side, a smear of Vietnamese butter (more reminiscent of a mayonnaise) is spread before toppings are added–small slices of pickled carrots, onions, cilantro, jalapenos, daikon and barbecued pork.  The texture of the baguette hoagie roll and the complementary flavors make it an outstanding meal choice, and while other Albuquerque restaurants also offer banh mi, May Hong’s version is the very best by a mile (with apologies to James Nguyen at Cafe Dalat). My friend Ryan “Break the Chain” Scott calls it the very best sandwich in the Duke City.

When we introduce first-timers to Vietnamese cuisine and we don’t want to risk them not liking it, we usually introduce them to May Hong’s beguiling chicken lemongrass. Lemongrass, one of the most popular ingredients in both Vietnamese and Thai cuisine, provides a light, lemony bouquet without the acidic bite lemons can add to a dish.  What it does to chicken is pure magic.  Even though the chicken isn’t exclusively white meat, it is all tender with nary a hint of sinew or fat.  The chicken is diced into small bite-size pieces then wok or pan-fried with a sauce of garlic, onion, chili, fish sauce, palm sugar and crushed lemongrass. Its fragrance is intoxicating, its flavor even better.

Another entree sure to ensnare even the most unacculturated or finicky American taste is May Hong’s beef ribs (pictured above) in a spicy sauce of ginger, scallions, pineapple, chili flakes and garlic.  The beef ribs are inch-long in size but have a depth of flavor that spans the entire plate.  This entree is piquant enough to imprint itself on your lips and tongue, a sensation you want to hold on to.  There’s enough of the spicy sauce for you to sop up with the rice which takes up half the plate.

American tastes which lean toward grilled meats will quickly become enamored of May Hong’s grilled pork in which pork is marinated with the sweet spices of anise and cinnamon to create an olfactory treasure that dances on your taste buds.   One of the best ways to have it is with patter noodles which don’t really seem to be noodles at all.  In fact, they seem to be more like a one large rice noodle sheet in a cheesecloth pattern.  The grilled pork is topped with crushed peanuts and scallions.  It’s traditional to wrap the pork first in patter noodles then in lettuce leafs with cilantro, julienned carrots, daikon, ribbons of cucumber, bean sprouts and fresh mint leaves inside.  These lettuce wraps are then dipped in May Hong’s pleasantly piquant fish sauce.  If freshness has a flavor, it’s something like this dish.

The crispy catfish in ginger sauce (pictured below) may be among the best pieces of fish I’ve ever had anywhere.  The ginger sauce is the color of luminous, fluorescent Day-Glo or maybe French dressing, but it has a flavor you won’t soon forget.  That’s because it imprints itself on your taste buds with piquant, savory, sweet and just slightly sour sensations.  Surprisingly it is a perfect complement to the meaty catfish which is fried to perfection.  Though the catfish skin is crispy, the fish is light and flaky and not “fishy” in the least.

May Hong is about tastes which make you savor every bite.  It was selected by the Albuquerque Journal food critic at the time as Albuquerque’s Vietnamese restaurant of the year for 1999 (earning three and a half stars), is one restaurant in which I could dine daily and one of my five very favorite restaurants in Albuquerque!  We’ve visited more than 50 times and are happy to report that none of the veneer has worn off.  May Hong remains a work of edible art!