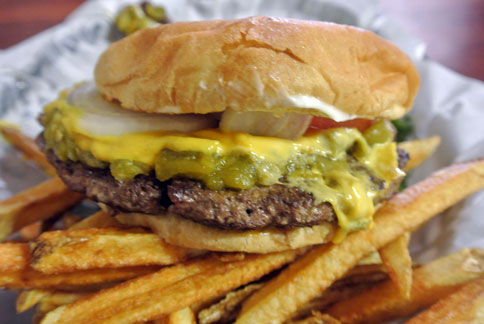 In 1863 during the height of the Civil War, soldiers on leave from Fort Craig staked claims to silver strikes in the Magdalena Mountains. Within a few years, the boom towns of Kelly and Magdalena had sprung up, eventually achieving a population surpassing even Socorro, the county seat. The first veins of metal ore given up by the rocky promontories were lead and zinc, but ultimately silver became the principal source of wealth.

With the arrival of the railroad in 1884, Magdalena became a rowdy frontier mining town and one of the Southwest’s largest cattle shipping centers with its stockyards processing thousands of cattle and sheep. Magdalena became known as the “Trails End” because the spur line which originated in Socorro had its terminus in the town named for the likeness of Mary Magdalene on a nearby slope. The railroad transported cattle, sheep, wool, timber and wool. It also transported carloads of ore to a smelter outside of Socorro.

No vestiges of the railroad remain, but it’s easy to imagine how spectacular the 20 meandering miles from Socorro to Magdalena must have been by train. That’s because Highway 60 approximates the route of the railroad line nicknamed “the elevator” because it climbed two-thousand feet in roughly sixteen miles. Highway 60 snakes its way past dramatic gorges, impressive boulders and large cattle ranches to emerge on the plains outside Magdalena. It’s a magnificent drive.

Today, instead of metalliferous lodes, Magdalena’s principal source of richness just may be its deep appreciation of its history and traditions. Several historic buildings–including the railroad depot which has been repurposed as the town’s city hall and library–have survived, some serving as homes to active businesses or private homes. Every year on the second weekend of July, Magdalena hosts its “Old Timers Reunion,” a three-day event celebrating the “good ole days” with such events as a rodeo, parade, street dance, arts and crafts and barbecue.

Situated roughly at the geographical center of Socorro County, Magdalena can also boast of a presence on the prestigious New Mexico Green Chile Cheeseburger Trail, a distinction the Magdalena Cafe shares with two other Socorro county purveyors of the Land of Enchantment’s sacrosanct sandwich. Magdalena is little more than half an hour away from San Antonio, New Mexico, the home of the world-famous Owl Cafe and the nearly-as-famous Buckhorn Tavern. but its green chile cheeseburger has yet to achieve the fame of its burger brethren. Attribute that to the perception that Magdalena an “out-of-the-way” and “off-the-beaten path” destination.

Adventurous diners who do trek to Magdalena will be rewarded with a spectacular drive to a beautiful frontier town which embraces its history and embodies hospitality. They’ll also discover a green chile cheeseburger which some say rivals its Socorro county counterparts for sheer deliciousness. The Magdalena Cafe sits on Main Street, not quite a block south of Highway 60. Though it didn’t launch until 1986, the building housing the Cafe dates from the turn of the twentieth century.

While its full appellation is Magdalena Cafe & Steakhouse, the Cafe has somewhat abbreviated serving hours with very distinct breakfast, lunch and dinner menus. Dinner is when steak makes it onto the menu, but dinner is served only on Thursday and Friday nights from 5PM to 7PM. Breakfast and lunch are served Monday through Saturday from 7AM to 1:30PM. The menus offer a hearty repast befitting all hungry and weary road-warriors. It includes burgers, hot sandwiches, milk shakes, steaks, homemade pies and so much more.

The green chile cheeseburger is nearly the size of one of the Very Large Array’s (only 24 miles away) antennas and unlike some burgers, you won’t need a radio astronomy observatory to find the beef. The hand-formed ground beef patty extends beyond the six-inch buns and probably weighs in at eight or nine ounces. At medium-well, it’s still got plenty of juices and flavor. The green chile is sourced from Sichler Farms during chile harvesting season. It’s a very nicely roasted chile with a discernible, but not overpowering, bite. Standard toppings include lettuce, tomatoes, pickles and onions. This five-napkin burger takes a backseat to no other burger, not even its neighbors to the east. It’s a top tier green chile cheeseburger in its own right…and as if a behemoth burger isn’t enough, an order of French fries is nearly the size of a cord of wood.

After Bob of the Village People commented about a taco shell “with a 1/2 inch flat bottom so Mamacitas could easily sit it on the food prep board to easily fill it,” it dawned on me that I’d never had such a hard-shelled travesty (largely because my preference is for soft-shelled tacos and hard-shelled tacos were invented by Taco Bell). By sheer coincidence, an a la carte order of two tacos at the Magdalena Cafe was constructed from the flat-bottom shells Bob mentioned. The flat-bottom not only makes filling these tacos easier, it allows for more filling. In this case, a generous amount of seasoned ground beef, lettuce, chopped tomatoes and shredded cheese. As hard-shelled tacos go, these were quite good, especially when salsa is applied.

Not only is the Magdalena Cafe within easy driving distance of New Mexico’s green chile cheeseburger Mecca, it’s less than an hour from the Land of Enchantment’s fabled Pie Town. If the New Mexico Tourism Department ever decides to create a “Pie Trail,” the Magdalena Cafe belongs among the pantheon of peerless pies. An apple pie is featured fare daily, but the menu also includes a mouthwatering selection of fruit and non-fruit fresh-baked goodness. My request for my server to “surprise me” actualized with a slice of banana split pie. That’s banana split, not banana cream. Whatever image you might be contriving as to what this pie might be will fall short. Atop a perfectly crumbly crust is a layer of sliced bananas topped with a luscious chocolate filling and whipped cream. It’ll make a convert out of you.

The Magdalena Cafe is the quintessential small town cafe in a small town every New Mexican should visit at least once (though a return trip is ensured after one visit and one meal).