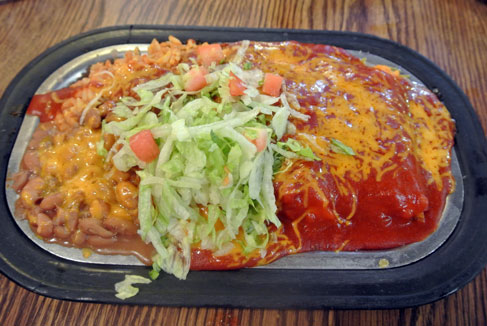 Imagine yourself a weary traveler motoring along a two-lane blacktop half an hour west of Albuquerque. Moments ago, having espied a preternatural palette of colors on your mirror, you stopped to gaze in awe and wonder at the breathtaking sunset spraying the sky with vibrant reds, oranges, yellows and purples. Rejuvenated by the slow descent of the sun giving way to an ebony canopy speckled with twinkling stars, you resume your climb of Nine Mile Hill. At its summit, you’re rewarded with one of the most inspiring sights in the west as the lights of Albuquerque come into view. It’s a sight Elvis Presley enjoyed often during his travels across the country in his pink Cadillac.

The year is 1952. The closer you get to Albuquerque, the more prominent the neon-spangled lights become. Vibrant neon signage cuts a luminous swath through the city, beckoning motorists with unique roadside architecture and welcoming motor lodges. You’ll take in the sights tomorrow. Now you’re parched and hungry. Fortunately there are a number of promising restaurants on Albuquerque’s sprawling western expanse and you don’t have to leave the Mother Road to find them. Just beyond the Western View Diner at which you’ve previously dined, you catch sight of a nascent newcomer with an interesting name and a fatted cow over its signage. Mac’s La Sierra Coffee Shop it is.

Fast forward sixty-two years. Motorists rarely take the exit from I-40 that traverses the length and breadth of Route 66 through the Duke City. A visit to Mac’s La Sierra Coffee Shop would be a great reason to do so. Now a venerable elder statesman among Albuquerque’s restaurants, Mac’s is one of the city’s oldest continuously operating eateries. The reason for its success? Award-winning author Sharon Niederman contends that “no friendlier place exists along the entire road.” Friendliness and good food go a long way in Albuquerque.

Mac’s La Sierra no longer has the pristine look and feel that pulled in so many motorists during the waning days of Route 66. Peruse the parking lot and you’ll quickly notice that virtually every vehicle in the sprawling parking lot is festooned with license plates from the Land of Enchantment. Finding an empty parking spot is a challenge. That’s always a great sign. An external sign will whet your appetite with the promise of “Steaks, Mexican Food, Breakfast All Day.”

If the “seat yourself” sign is posted, you may have to visit every one of the restaurant’s three dining rooms (one of which is adorned with framed paintings of bullfighters) to find a vacant table. Seating is in personal space proximity. Mac’s La Sierra seems as popular with blue- and white-collar workers as it is with families and celebrities (including Steven Michael Quezada), many of whom are regulars who need not peruse the menu to know what they want. Breakfast Specials, including two south of four dollars, include short steak fingers and eggs. Steak fingers, a long-time specialty of the house, are deep-fried and coated ground beef shaped like a “finger.”

The menu is a veritable compendium of New Mexico coffee shop and diner favorites. That means a good mix of New Mexican specialties as well as American favorites. The breakfast specials are available from 6AM through 11AM, but you can have anything else all day long. That includes a 12-ounce New York cut. It’s a menu first-timers will want to study though a casual glance toward adjacent tables may be even more effective. Green chile adorned burritos, tamale plates and enchiladas are obvious favorites.

6 November 2014: You won’t be seated long before an attentive and friendly server visits your table. If, like me, your approach to New Mexican food is to precede your entree with an order of chips and salsa figuring you’ll be done with them before your entree arrives, Mac’s La Sierra will surprise you. You won’t be too far into your chips and salsa before your entree arrives–and it’s piping hot, too. Alas, the chips and salsa are too good to be rushed. The rich, red salsa has a bite. It’s a salsa to be enjoyed and respected. The chips are light, crisp and not overly salty.

11 November 2014: If you’re into threesomes, the Super Mac’s Combo is your hook-up. Available as an entree or a generously sized appetizer, this prodigious platter includes three steak fingers, three taquitos, three chicken fingers, French fries and guacamole. The steak fingers, a long-time restaurant staple, are lightly battered and well-seasoned. The guacamole is so much more than mashed avocados. it’s actually got a discernible though not overpowering heat. Only the taquitos missed the mark, the meat inside the rolled taco shell being more than a bit overdone.

6 November 2014: Every first-time visitor should order the Special Mexican Plate, a cheese enchilada, taco, beans and rice all covered with your choice of red or green chile (or both) with sopaipillas on the side. “Mexican” plate is a misnomer because this combination plate is New Mexican through and through. The tamale is the most special item on this special plate. It’s engorged with tender tendrils of red chile marinated pork enrobed in a sweet corn masa. The hard-shelled taco is stuffed with ground beef and shredded cheese (none of the oft-annoying preponderance of lettuce and tomatoes). You’re free to add the contents of a plastic squeeze bottle of salsa. The enchilada and beans are top shelf quality, too. Both the red and green chile have a nice bite and endorphin-enhanced addictive properties. Everything is served steaming hot the way it should be.

11 November 2014: There aren’t many restaurants whose menus include fried chicken so my Kim tends to order it whenever she finds it. At Mac’s La Sierra there’s a 25-minute wait time for the chicken to be prepared. It’s served with coleslaw, your choice of soup or salad and your choice of potato (baked, mashed or French fries). Alas, the fried chicken delivered to our table was overly breaded and a bit rubbery (a sign it’s been overcooked). While that may have been an anomaly, we probably won’t order it again considering the New Mexican food has been consistently good.

11 November 2014: Consider it heretical if you will, but it’s entirely possible to have too much red chile on an entree. That’s the case with the tamale plate, three meaty tamales covered with your choice of red or green chile. Here “covered” means practically deluged and overrun with chile. While the chile is good and has a pleasant piquancy, it overwhelms the masa sheathing, which despite being marinated in chile tends to have a rather delicate flavor profile. You’ll find yourself shoveling the chile onto the beans and rice so you can enjoy the tamales light on chile the way they should be.

6 November 2014: The sopaipillas are light and puffy with airy pockets perfect for depositing honey. Alas, they’re served with squeeze bottles of “sopaipilla syrup” (which some taste bud deprived genius–probably from the government–figured would fool diners) instead of real honey. If you do ask for honey, your server will gladly bring a number of small packets of honey, the type of which are annoyingly challenging to open. Despite the challenge for ham-fingered diners like me, honey is still the only way to go.

18 January 2019: It would be easy to dismiss chicken fried steak as cheap, plebeian food for the masses…as if anything so good and comforting could possibly be plebeian.  Chicken fried steak wasn’t always perceived as mere, pedestrian diner food.  There was a time–not that long ago in fact–that chicken fried steak was given the same esteem typically reserved for such fine-dining cuisine as prime rib, lobster thermidor and deviled crab au gratin.  During the annual meeting of the National Restaurant Association in 1942, the rank and file compiled a list of America’s top ten favorite restaurant dishes.  Chicken fried steak ranked number three (ahead of the aforementioned fine-dining staples).

My friend Bruce “Sr. Plata” Silver, keeper of Sr. Plata’s Chicken Fried Steak Trail, probably would have put chicken fried steak at the very top of any list.  He and I have traversed the length and breadth of the Duke City in pursuit of the city’s best.  We should have visited Mac’s La Sierra long before we did.  For a day’s worth of calories, carbohydrates and deliciousness, Mac’s chicken fried steak plate just can’t be beaten.  A hefty chicken fried steak smothered in country gravy and served with two eggs any style, hash browns, toast and jelly.  While the menu admonishes “no substitutions,” the genial servers are quick to push the sopaipillas as a substitute for toast.  Good call!  The chicken fried steak is pounded into a tender slab then breaded lightly so that its golden hue just beckons–or at least the part that isn’t covered by the glorious country gravy with its peppery influence.

Mac’s La Sierra is one of those rare restaurants which transcends time thanks to a time-proven formula of great food, great service and great value…just the way it was during the era of Route 66.