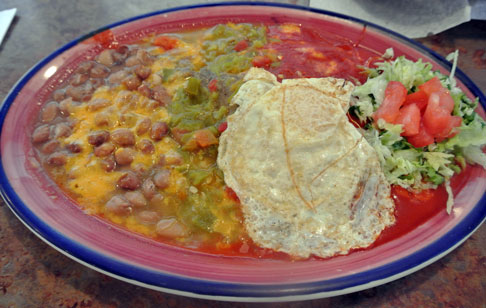 Homer Simpson: “Five-alarm chili, eh? (Takes a bite) One…two…Hey, what’s the big idea?”
Ned Flanders: “Oh, I admit it. It’s only two alarm, two and a half, tops! I just wanted to be a big man in front of the kids.”

One-alarm, two-alarm, three-alarm…since the 1850s, American fire departments have relied on alarm systems to alert firefighters to the severity of a fire and the staff required to battle the conflagration. Typically the higher the number of alarms, the more severe the fire and the greater the complement of firefighters required to fight it though the precise meaning of an “alarm” varies, depending on the fire department.

It stands to reason that a multi-alarm designation also be used to designate the “heat” generated by chile (or “chili” if you’re a foreigner; i.e., from Texas). In 1964, Wick Fowler, a journalist from Austin, Texas founded a company to sell his “two-alarm chili,” the cumin-laden recipe he followed in winning the international chili championship cook-off in Terlingua, Texas. Since then, chile (or chili) cooks have often used a one-alarm, two-alarm, three-alarm, etc., designation to denote piquancy.

Duran’s Station, a popular New Mexican restaurant, is a rather unique convergence of the two entities for which the one-alarm, two-alarm, three-alarm… system has been known in America. From August, 1954 until its decommissioning in 1992, the edifice which houses the restaurant served as home to Fire Station #8 on the intersection of Menaul and Graceland. After 38 years as a fire station, the building was repurposed and sold, launching in December, 2005 as Duran’s Station where one-alarm, two-alarm, three alarm now applies to the red and green chile for which the restaurant has come to be known. The red, by the way, earned “best of the city” honors from Albuquerque The Magazine readers in 2012.

Vestiges of Fire Station #8’s halcyon days can still be found though even firehouse veterans might be challenged to espy them. Most readily identifiable as a firehouse standard are the interior red brick walls. The bay doors from which trucks ambled onto Menaul have been walled in with tall windows providing vantage points for of one of the city’s busiest thoroughfares. The old firehouse’s kitchen is gone, replaced by the restaurant’s entrance-reception area. The “apparatus room,” essentially a large garage in which the firetrucks were housed, now serves as the restaurant’s sole dining room.

If you’ve surmised there’s an affiliation between Duran’s Station and the Old Town area’s Duran’s Central Pharmacy, you’re probably a Duke City native. Duran’s Station is owned by Marcel Ghattas, eldest scion of Robert Ghattas, the long-time owner of Duran’s Central Pharmacy and patriarch of a prolific family of restaurateurs (daughter Myra owns and operates the Slate Street Cafe as well as Sixty Six Acres). Now, if you know why both restaurants are named “Duran” and not “Ghattas,” you just might be a Duke City historian. In the late 1950s, Robert Ghattas began working with Pete Duran at Pete’s Pharmacy which then included a soda fountain. A few years later, Robert purchased the pharmacy from Pete and the soda fountain came with it. So did the name.

As consumer tastes changed, interest in the soda fountain waned, prompting Robert to change the menu to cater to neighborhood tastes. In a predominantly Hispanic neighborhood, it just made sense that Duran’s should offer New Mexican cuisine. The rest, as the proverbial “they” say, is history. Today Duran’s menu is practically the same as it was on the day it was introduced. Duran’s has become a home away from home for blue- and white-collar diners who converge there for breakfast and lunch. The menu at Duran’s Station is nearly identical to the menu at its elder sibling, but instead of breakfast, it serves lunch and dinner. Duran’s Station can also accommodate more diners.

27 December 2014: Among Duran’s long-time standards are hot-buttered tortillas. Long regarded as among the very best in the Duke City, these are not the tissue-thin, machine-pressed, bland-flavored abominations served in too many New Mexican restaurants. These tortillas are hand-rolled and comal-griddled until speckled with pinto-pony brown char spots. They’re soft, warm and thick, a perfect canvas for slathering on butter. In true Land of Enchantment tradition, they’re also ideal for forming into “New Mexican spoons” with which to scoop up beans.

27 December 2014:  Your first portion of salsa and chips is complimentary. Thereafter you’ll pay a pittance for one of the very best salsa and chip pairings in the city. The salsa is served in a clear plastic ramekin that frankly doesn’t hold enough salsa to suit me, especially since the chips are fresh, thick, crispy, low-in-salt and invitingly accommodate Gil-sized salsa scoops. This is not a salsa for dipping. It’s meant to be scooped for maximum enjoyment. It’s not especially piquant and some might say the preparer was a bit heavy-handed with garlic, but it’s a very fresh, delicious salsa.

27 December 2014:  Santa Fe resident and Saturday Night Live alum Jack “Deep Thoughts” Handey postulated that “If God dwells inside us like some people say, I sure hope He likes enchiladas, because that’s what He’s getting.” More often than not in New Mexico, that means enchiladas made with blue corn tortillas and served stacked (flat). That’s the way they’re served at Duran’s Station. Three flat blue corn cheese enchiladas per order served Christmas-style (both red and green chile) with an egg on top is the way I’d serve them to God. The blue corn tortillas are sweeter and more “corny” tasting than those made with yellow or white corn. Both the red and green chile are deeply flavorful with a nice level of piquancy. The accompanying pinto beans with melted shredded Cheddar are a nice touch (and remember, they go well with New Mexican “spoons.”)

27 December 2014:  While carne adovada is a Thursday only special at Duran’s Central Pharmacy, at Duran’s Station, you can get this outstanding dish every day for lunch and dinner. It’s some of the best carne adovada in town. The delicious orange-red chile used on other entrees is ameliorated with aromatic Mexican oregano and chile pequin, a fiery, dried red chile made from ground chile pods, not from powder. That chile covers bite sized cubes of porcine perfection so tender and delicious they will make your taste buds smile. My Kim enjoys her carne with a fried egg (over-easy) on top. The carne adovada is served with steamed potatoes nearing the consistency of mashed potatoes.

27 December 2014: On its Facebook page, Duran’s Station posted the three ways to your heart: “buy me enchiladas, make me enchiladas and be enchiladas.” Frankly, Duran’s Station has many ways to win the heart of all its diners and though most of them involve red and (or) green chile, the menu also features some pretty terrific desserts. While some are seasonal (caramel apple cake), you can usually find a pie or two on the menu. The buttermilk pie with vanilla ice cream is especially good if you have a pronounced sweet tooth. It’s ultra rich and buttery with a smooth texture and crumbly crust.

18 September 2019: Barney, the mono-toothed purple dinosaur was as beloved by children as he was loathed, abhorred, detested and vilified by adults.  Some people even claimed he was Satan.  Aside from hearing his nauseating “I love you, you love me” song in passing, my only other exposure to the terrible tyrannosaurus was hearing his “Tortilla Song.”  Though I found Barney’s voice as mellifluous as fingernails scratching on a chalkboard, the lyrics resonated with me: “When we’re done, we can wrap it ’round other foods.”  When it comes to versatility, nothing beats a tortilla.  Duran’s certainly recognizes this, using the tortilla as a wrapper for the usual suspects (burritos, butter, enchiladas) as well as for sandwiches.

You can have the grilled roast beef and Cheddar on sourdough bread, but why would you do that when you can have it on a warm tortilla made on the comal.  The roast beef is akin to shaved steak much like you’d find on a Philadelphia cheesesteak, but instead of being paired with green peppers, the roast beef is served with green chile as well as sliced tomatoes.  The roast beef is tender and moist with none of that annoying gristle or fat you sometimes find in roast beef. The sandwich comes with a side of con queso and Fries.  That con queso is special.  It’s got plenty of piquancy and pairs well with the sandwich whether you pour it on or use it as a dip.  The fries are strictly out-of-the-bag mediocrity.

With the launch of Duran’s Station in 2005, Duke City diners can treat themselves on both sides of town to the culinary excellence they’ve come to expect from the Ghattas family.