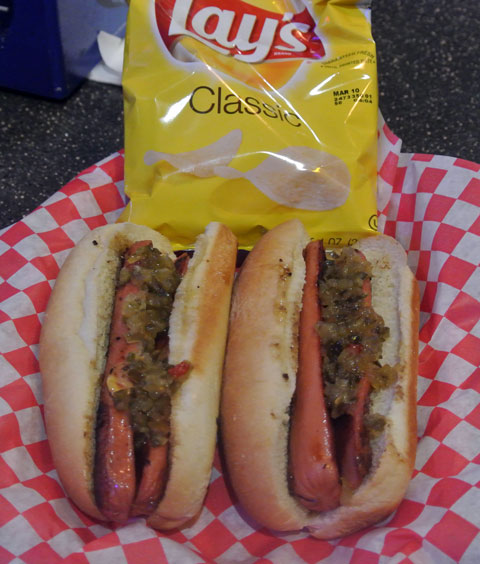 The late comedian and beloved social critic George Carlin might be surprised at how far America has come (some might say how much we’ve regressed) when it comes to uttering foul invectives, especially the “seven words” he postulated “you can never say on television.” While most of us still won’t vocalize the infamous “F-word” in polite company, its diminutive version has become part of our vernacular. Whether on screen or in print (or on shirts emblazoned with the abbreviation F.U. (which doesn’t stand for Florida University)) it’s “F this” and “F that.”

It’s been said that the F-word is the most versatile word in the English language in that it can be used as an action verb, passive verb, adverb, noun, adjective and even conjunction. Make it a gerund by adding “ing” and the F-word’s utility as an adjective is virtually unlimited. Like something and it’s “effing great.” Hate something and it “effing stinks.” At the very least, a bar and grill with the unique name “Effingbar and Grill” will get your attention. It’s not until you visit that you’ll determine whether it’s effing good or effing bad.

Our server jokingly apprised us that the “effing” part of the bar and grill’s name can essentially mean whatever we want it to mean, then clarified that the “Effingbar” is actually named for the owner’s hometown, Effingham, Illinois. While that may be the case, the menu is replete with items prefaced by “effing” and even if they’re not, you may just find yourself asking for the effing hot dogs or effing nachos then effing thanking your server when she effing delivers them. It’s a good bet she’s heard it all before.

We all like to think that the adult beverage establishment we frequent is the proverbial place “where everybody knows your name.” The Effingbar truly may be that place. Like Cheers barflies Norm Peterson and Cliff Clavin, regulars–and there seem to be many of them–belly up to their favorite bar stool for an unfettered view of one of the fourteen high-definition televisions, all turned to sporting events. The Effingbar and Grill also offers karaoke and live music as well as daily lunch specials.

Established in 2010, the Effingbar and Grill seems to have fallen under Albuquerque’s culinary radar a bit with nary an Urbanspoon review and only eight (mixed) reviews on Yelp as of this writing. Frankly, it might have escaped my notice, too, had it not been for a posting on the “Best Burger Review” blog touting the “best burgers we ate in 2014.” Described as “one of the most under-rated burgers in Albuquerque” and “nothing fancy, but, juicy and full of flavor,” far be it for me to pass up such a tempting appraisal.

With its masculine ambiance of dark wood accents and darkness punctuated by generous dabs of light emanating mostly from televisions and illuminated bar signs, the Effingbar and Grill won’t be mistaken for a fine dining establishment, but its culinary offerings are head and shoulders better than dive bar food. The menu offers an array of New Mexican entrees, certified Angus beef burgers (fresh, never frozen), sandwiches, hot dogs and even steak.

If you’re tired of insipid salsa that tastes good, but doesn’t bite back, the Efingbar and Grill has salsa you can truly respect. If you don’t exclaim out loud “this salsa is effing hot!,” you’ll at least be thinking it. It’s among the most piquant salsas in town, on par or even more piquant than the incendiary offering at Sadie’s Dining Room. We usually have a surfeit of chips remaining after quickly polishing off the salsa, but that wasn’t the case with this flame-eater’s delight. The queso isn’t especially piquant, but it’s got a very good flavor and perfect viscosity.

Visit the Effingbar’s Facebook page and you might be tempted to lick the screen. That’s because the page’s cover photo depicts the Effing Burger, ten ounces of fresh ground Angus beef cooked to your exacting specifications (though medium-well to well are recommended) and topped with American and Swiss cheeses, sauteed mushrooms, bacon, green chile and a large onion ring on a sourdough bun with lettuce, tomatoes and pickles served on the side. Perhaps the best thing about this burger is how the melange of fresh ingredients take a supporting role to the thick, nicely seasoned beef. The next best thing is how the green chile actually bites back. Though you can have this burger with fries or onion rings, its best pairing might be with the chile cheese fries Christmas-style.

Pursuers of cheap eats will appreciate an occasional special of two hot dogs for under four dollars. You can have these fabulous franks dressed your way (mustard and relish for me) within a split wiener repository, but you’ll probably come away with a higher appreciation for how well they’re grilled. Few things in life are as satisfying as a simple hot dog or two.

The Effingbar and Grill is one of the Duke City’s most effing good surprises–a friendly, easy-going milieu that actually serves effing good food (and maybe even a PBR or six for my friend Bob).