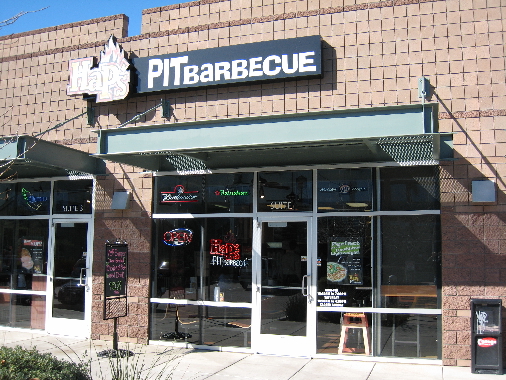 Good barbecue in Arizona? You’d better believe it! Hap’s Pit Barbecue is one happening barbecue joint, one that its proponents believe its name is short for “happiness because that’s what it elicits from its diners–that and audible exclamations of “wow” and “yum.”

Hap’s is a perennial listing on Phoenix magazine’s coveted best restaurant list and the only Phoenix barbecue establishment to earn a five star designation from the Arizona Republic newspaper. If you’re looking for national credentials, it’s been raved about on USA Today.

Despite those impressive plaudits and accolades, what it took to get me to Hap’s was a recommendation by my great friend and fellow barbecue aficionado Dianna Peoples. I’d been fooled before by the magazine rants of critics who obviously didn’t know what they were talking about. This time those critics were spot on!

Hap’s captures you before the door with the wafting olfactory pleasing aroma of smoked meats that smell as if they’ve just come out of a real barbecue pit. You’re greeted by a staff obviously proud of their product–and for good reason. Unfortunately during my first visit, I couldn’t sample all of those good reasons, but what I did sample were some of the best hand-rubbed pork ribs I’ve had in many a year. They were meaty and succulent, absolutely finger-licking delicious.

If you’re famished, the perfect cure for hunger is Hap’s meat sampler which features ribs and chicken along with three meats of your choosing. My choices have been pulled pork, ham, lamb and links all of which bordered on barbecue perfection. The lamb was ameliorated by Hap’s own mint sauce which was thinner than most but an excellent flavor complement to a lamb that had very little gaminess.

Also outstanding are the Old Settler beans which are an amalgam of different beans and bacon. The cornbread is true to its Southern heritage, an excellent complement for the ribs and beans. The ham, pulled pork and links are also superb.

Hap’s could compete in the Texas barbecue arena and that’s a huge compliment.