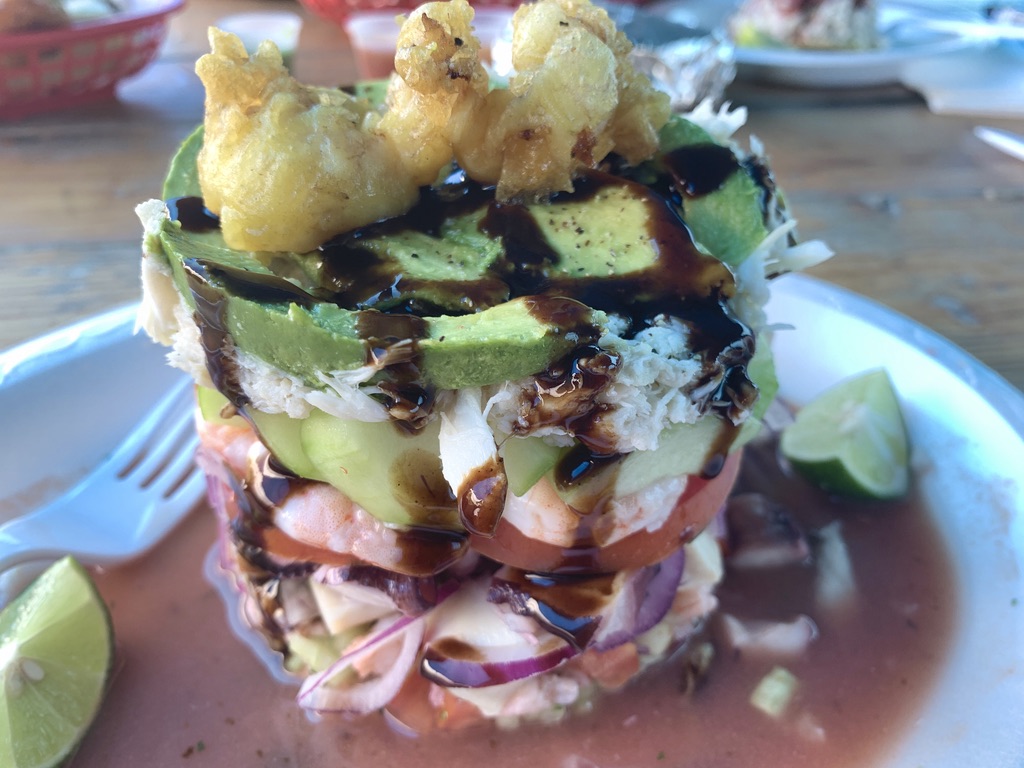 Never mind your tired, your poor or even your huddled masses yearning to breathe free. Carlos Zazveta, the effusive proprietor of Sharky’s Fish & Seafood told us to bring our dogs, our cows and our goats next time we visit. That was after we explained we didn’t bring our children because they’re of the four-legged variety that barks. He was just kidding, of course. Carlos does that a lot. When he espied me taking pictures of the Sharky’s complex, he flashed a toothy grin and flexed his pecs from within the confines of the oyster bar he was manning at the time.

In New Mexico, Sharky’s just may be the closest you’ll get to being in a Mexican coastal resort—not because of proximity, but by virtue of look and feel. The overhanging corrugated metal roof and lower half of the building’s walls have the tincture of deep azure, harkening to mind the clear Pacific waters of Puerto Penasco in the Mexican state of Sonora. Sonora is where Carlos calls home and where he cultivated his deep love of Mexican cuisine, especially the type of mariscos he’s sharing with his adopted hometown of Albuquerque.

There are other elements to Sharky’s that evoke the sense that coastal Mexico has been brought to your neighborhood. Similar to many of the hut-like structures on the beaches of Sonora, Sharky’s is strictly a “to go” operation, not that you’ll have to go far. After placing your order at a counter, saunter on over to the covered patio which does a surprisingly good job shielding you from the elements. When the mercury climbs higher, soothing water misters cool the air. The picnic tables are much more functional than they are comfortable.

Before (or after) the right picnic table calls you, it’s a quick detour to the salsa bar where several piquant salsas are available. You can also ferry to your table, as many plastic tubs of salsas as you want. They’re available with tostada shells or with crackers, not with chips. The salsas range in piquancy from merely incendiary to hellishly hot. Even the Ranch dressing and the guacamole pack a punch. In short order your server will locate you and will deliver your order with alacrity.

Perhaps nothing screams “ocean” more loudly or clearly than mariscos, the Mexican seafood from the seaside states south of the border. Sharky’s colorful poster-sized menu not only lists everything that’s available, a photograph of each item is vividly displayed. If you find it hard to order while your mouth is watering, you may want to avert your eyes from those photographs. Doing so will also prevent you from ordering “one of each” from a menu that would be the envy of many a sit-down restaurant.

Fish and shrimp may be the titular items on the menu, but they’re far from having exclusivity. The menu also includes the non-mariscos culinary pride of Sonora—the fabled and fabulous Sonoran hot dog. You’ll also find all the usual suspects in crimes of rampant deliciousness: tacos, tostadas, quesadillas and burritos constructed from either mariscos or the magnificent Mexican meat options of carne asada, al pastor, lengua and carnitas. You can even have a single- or double-cheeseburger though why you’d want to when there are so many other options is beyond me.

As you’re perusing the menu, you probably won’t even notice all the activity on Central Avenue scant feet away from the restaurant. Sharky’s is located just west of Old Coors where Route 66 is cresting toward the city’s western fringes. It’s hard to believe previous occupants of the colorful edifice included the now defunct Lumpy’s Burgers and long-time Duke City eatery Taco Phil’s. Sharky’s belongs on this stretch of highway alongside such venerable institutions as the Western View Diner & Steakhouse and Mac’s La Sierra Café  as well as popular newcomer Caveman Burgers.

7 June 2015: It’s a good thing Sharky’s menu has pictures or many New Mexicans might find themselves on the receiving end of something they’ll contend they didn’t order. For many New Mexicans, Chile Caribe is a concentrated paste made from whole chile pods which serves as the basis for red chile. At Sharky’s, Chile Caribe are more akin to the jalapeno poppers so many restaurants serve, but they’re much better. A yellow chile pepper is engorged with cheese and shrimp then wrapped in bacon and grilled. The chile isn’t especially piquant, but it does have the tantalizing aroma inherent in all chiles. Couple that with the addictive properties of bacon and you’ve got a terrific starter. Served three to an order, you’re well advised to request two orders or risk waging war with your dining companion for the remaining chile.

2 July 2020: Anthropologist Maribel Alvarez of the University of Arizona says the “quintessential food of Tucson” is the Sonoran hot dog. Tucson should be very proud. These hot dogs are mouth-watering–a thick, smoky dog gift-wrapped in bacon and nestled in a pillowy soft, slightly sweet bun with seemingly every condiment applied. There’s mustard, ketchup and mayo as well as a mild jalapeno sauce. This hot dog is a wonderful study in contrasts: the sweetness of the bun and the smoky savoriness of the hot dog and bacon; the heat of the hot dog and the cool of the ketchup; the piquancy of the jalapeño sauce and the creaminess of the mayo. Moreover, it’s a study in the appreciation of complex simplicity.  Not everyone will love the Sonoran hot dog, but I feel validated in my high opinion of this mess in a bun because three-time James Beard award-winning chef Pati Jinich loves them as much as we do.

2 July 2020: Ever since Lebanese immigrants moved to Mexico in the early 1900s and introduced the technique of spit-roasted meat, Mexicans have been in love with the “al pastor” or “in the style of the shepherd” cooking. Tacos al pastor are constructed from small cubes of pork that have been marinated in spices and chiles. New Mexicans have fallen in love with tacos al pastor and have uncovered several restaurants in which they’re prepared very well. Add Sharky’s to the growing list of Mexican restaurants offering tacos al pastor.  Though Sharky’s version is good, there are better throughout the city.  That’s why we usually stick to mariscos (save for the Sonoran hot dog).

7 June 2015: Since most people visit mariscos restaurants for…well, mariscos, our inaugural visit couldn’t be solely about hot dogs and al pastor, wonderful as they are. Not when there are fish tacos and shrimp tacos on the menu. Both are superb! Nestled in soft, moist tortillas redolent of corn, both tacos include chopped tomatoes and a cabbage slaw very light on the mayo. The flavors most prominent are that of fish and shrimp, not some overly creamy slaw. These tacos are accompanied by a piquant sauce that you should apply judiciously lest you risk changing the flavor profile of the tacos. You won’t want to do that.

7 June 2015: It’s only fitting that the ceviche at Sharky’s be served in a bowl shaped like a boat. There’s a netful of fish and (or) shrimp in each order of ceviche and it’s very good. Served with sliced limes just in case they’re not sufficiently “citrusy” for you, the ceviche is refreshing and flavorful. It’s the perfect summer dish—light, bright and it won’t weigh you down during a sweltering day. The fish and shrimp are unfailingly fresh as are the chopped cucumbers, tomatoes and avocadoes, the latter of which are at the epitome of rich ripeness.

2 August 2020: A vibrant, chilled seafood tower is a head-turning, commotion-causing event accorded reverence, awe and respect.  Alas, these elaborate collections of raw and cooked shellfish often elicit Fred Sanford-level sticker shock because the cost of a seafood tower approximates the cost of the Sears Tower in Chicago.  At least that’s the case everywhere but Sharky’s where a torre de mariscos (seafood tower) can be yours for less than the cost of two adult movie tickets.  Fashioned in a timbale, a round mould in which the seafood is layered artistically, the torre de mariscos is a thing of absolute beauty!

Crowning the torre is a single fried shrimp, crispy and golden.  Thinly sliced ripe avocados form the top layer, blanketing a bed of finely shredded crab.  Beneath the crab is a layer of fresh, crunchy cucumbers.  Below that are peeled and boiled shrimp with a snap of freshness.  The shrimp sit atop juicy red tomatoes which crown succulent squid and sweet scallops, both tasting of the sea.  The melange luxuriates in a pool of tomato and citrus juices ameliorated by the dark, exotic salsa negra.  Neptune himself couldn’t have fashioned a more elegant exemplar of seafood.  Sure, the torre is big and showy, but a single order is a cause for celebration.  Sharky’s offers this extravagance at a price even paupers among us can afford.

2 August 2020: The torre de mariscos is so good, it makes the crab tostada seem rather pedestrian in comparison.  That shouldn’t be the case because the crab tostada is a star in its own right.  Picture a crispy corn tortilla topped with a generous mound of finely shredded lump crab held loosely together with just a sheen of mayo.  The crab is topped with red onion, sliced avocados and a drizzle of salsa negra.  Unlike tostadas de ceviche which acquire their flavor profile from citrus juices, the sweet, delicate, delicious crab is the star of this dish.

About the only thing you won’t find on the menu at Sharky’s is shark, a fish which is not only edible, but which can be delicious if prepared fresh. A visit to Sharky’s is like a visit to Puerto Peñasco and just as delicious…and you can bring your dogs, cows and goats.