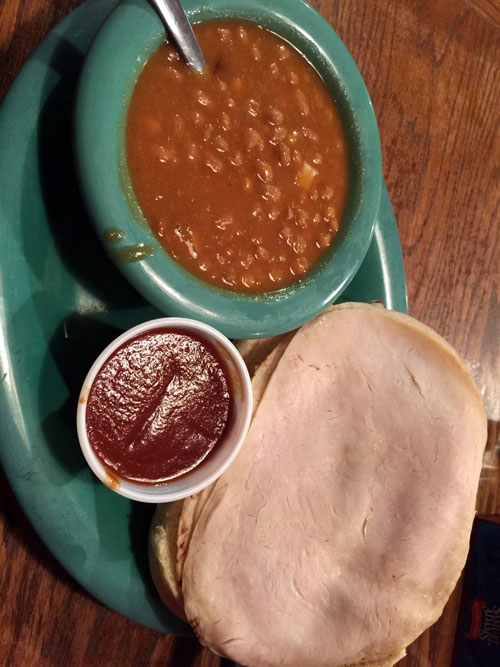 Some of my friends accuse me of making my Web site a bully pulpit against chain restaurants and being a shameless “homer” when it comes to promoting locally owned and operated restaurants. I make no secret of my overwhelming preference for local restaurants, but never at the expense of a personal integrity which won’t allow me to pander to local restaurants which, in my honest opinion, don’t quite measure up. One such restaurant is the venerated Quarters–at least in terms of its barbecue.

One of Duke City’s oldest and most revered barbecue joints, the Quarters is generally teeming with loyal patrons who will tell you that Quarters puts the ‘cue in Albuquerque. Now with three locations, including a sprawling edifice launched in 2004 on Albuquerque’s burgeoning West side, the Quarters shows no surcease in popularity. The Nellos family which owns and operates Quarters is practically royalty in Albuquerque, not only because of their popular restaurants, but because of their civic involvement and community-mindedness.

The rib dinner, eight to ten pork spare ribs served with two sides, exemplifies what I don’t like about Quarters.  The ribs are dry despite being slathered with the tangy sauce.  That’s entirely two bad considering the generous amount of ribs on the plate and the fact that the ribs are meaty. The barbecue is dry.  It’s over-sauced.  I think my point has been made, but if you’d like an other opionion, check out the musings of Larry McGoldrick, New Mexico’s premier contributor to Urbanspoon. His sentiments toward the Quarters’ barbecue echo mine.

I started off this review acknowledging that Quarters is “revered.”  It is  indeed a perennial recipient of several “people’s choice” and “best of” awards and its parking lots are usually crowded.  There are probably more people who love the Quarters than there are detractors.  Because it’s not one of my favorites (by a long-shot) doesn’t make me a “hater,” as one of my Quarters-loving work colleagues accused me of being.  I like to think it makes me a discerning diner whose preferences for barbecue are elsewhere. You’re free to agree or disagree as you please.

We’ve had much better luck at Quarters with red meat entrees which have, in recent visits, been prepared to our exacting specifications. If you ask for your red meat entree to be prepared medium, the grill chef executes. If you ask for salt, pepper and garlic on both sides of your steak, it’s applied in exacting proportions–and we’re not talking garlic salt here. It’s minced garlic that brings out the flavor of a New York steak. The New York steak is perfectly tender with nary any excess fat. At twelve ounces, it is a beauteous strip of meat with charred edges. Cut into it and the succulent juices flow, exposing the perfect amount of pink.

Another nice meat entree is the Teriyaki Shish-Ka-Bob sans skewers. It’s a generous plate comprised of sliced steak, mushroom caps and grilled red and green peppers. The ka-bob is sliced into larger than bite-sized pieces of moist, tender and delicious meat, the flavor of which is ameliorated by a teriyaki sauce that is neither too sweet nor too savory.

Another favorite item at Quarters is the dinner salad (iceberg and Romaine lettuce, tomatoes, croutons, cucumbers) with as much blue cheese as the wait staff can carry. The blue cheese dressing is light on the mayo and heavy on the blue cheese, a great combination for blue cheese aficionados.

In 2006 and 2007, Quarters earned Wine Spectator’s “Award of Excellence,” an accolade bestowed upon restaurants whose wine lists offer interesting selections…and appeal to a wide range of wine lovers.”