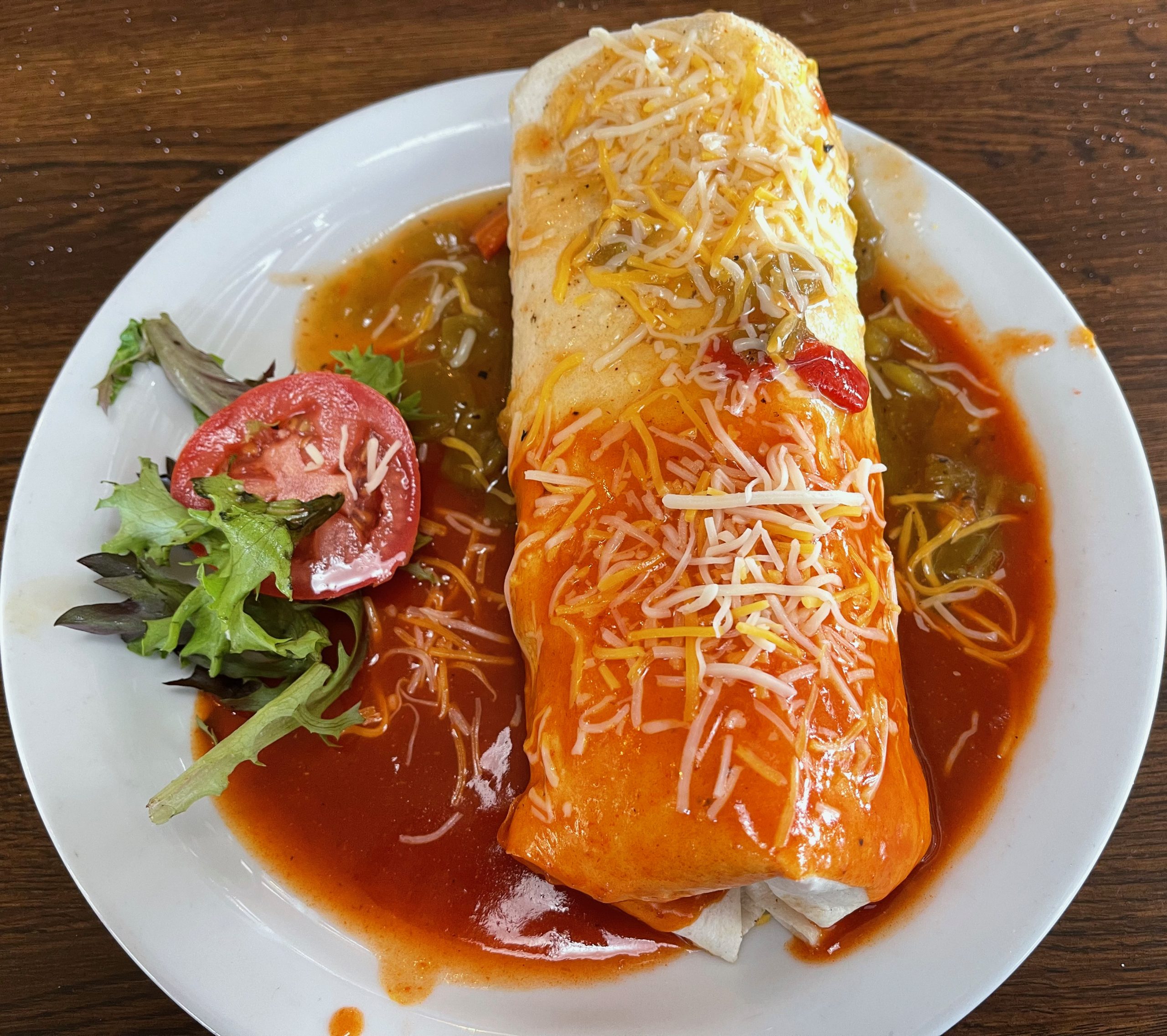 It’s been said that “when you feed those in need, you are feeding your soul.”  That is especially true when the giver is practicing selfless giving, a conscious, intentional approach to giving that not only benefits others, but comes during a time when the giver is in dire need of help as well.  When the New Mexico state government’s approach to the Cabrona Virus virtually closed down or limited restaurant operations across the state, it’s an understatement to say restaurateurs were really hurting.  Dozens of restaurants across the Land of Enchantment closed. Hundreds of employees were laid off.   It was during these trying times that several restaurateurs demonstrated truly heroic altruism, showing precisely what it means to be a great neighbor.

Among the most selfless givers were restaurateurs George and Alicia Griego, owners of Albuquerque’s Central Grill.   In 2020, George and Alicia were named the New Mexico Restaurant Association’s (NMRA) Restaurant Neighbor of the Year for 2020.  Though their popular eatery faced the same unpredictable operating conditions crippling other restaurants, George and Alicia looked for opportunities to help their neighbors.  In the spirit of Luke 10:25, they opened their hearts, providing thousands of boxes to feed school children, seniors and others around the state.  They prepared over 10,000 sack lunches for school systems across the state. They partnered with Legacy Church and Steel Bridge (formally the Albuquerque Rescue Mission) and Sysco to make 5,000 food boxes that were delivered to Native American Pueblos across the state.  They also reached out to UNM hospital and sponsored over 350 meals to each department at the Hospital to show their appreciation for their hard work dealing with the pandemic.  They also sponsored 400 lunches for Covid-testing locations throughout Albuquerque.

Characteristic of so many heroes, George and Alicia would prefer to deflect attention to those remaining in need.  They do so without seeking fanfare, without crowing about their generosity, with no expectation of reciprocation.  On Friday, January 13, 2021, I had the honor and privilege of interviewing George for an episode of Hungry Hump Days on Sunny 101.3.  Months later I find myself still in awe of what George and Alicia did when heroes needed to stand up.  The very least I could do to support them is to visit the Central Grill, their highly regarded restaurant on Central Avenue.

Interestingly the site which now houses the Central Grill has inspired near pilgrimage enthusiasm even before the Griegos began serving award-winning food.  With an almost reverential zeal they come, their cellphone cameras at the ready. The enthusiasm for their pilgrimages has brought them to this hallowed destination from every corner of the country. Some know next to nothing about the city, save for it having been the hometown of chemistry-teacher turned meth-kingpin Walter White. They don’t regard the city with the ignominy with which it’s been portrayed, but as a Mecca replete with landmarks of the groundbreaking television series. They come for up-close-and-personal views of locations frequented by its characters.

The more enthusiastic among them have gone as far as to toss a pizza on Walter White’s roof, recreating White’s famous pizza toss from season three. Roughly 200 avid devotees wishing to bid one last goodbye to the drug lord better known by the clandestine pseudonym “Heisenberg” even participated in his mock funeral. Most, however, are content to take in the landmarks from the air-conditioned conveyances of the several companies capitalizing on the show’s popularity.

One landmark Breaking Bad enthusiasts will no longer find is Liu’s Chinese Fast Food Restaurant which made a cameo appearance during a season one episode entitled “Cancer Man.” No longer will fans be able to reenact the scene in which Christian “Combo” Ortega stood outside the restaurant to call Jesse Pinkman, Breaking Bad’s deuteragonist. It may not seem like much to the casual watcher, but to diehard devotees, it’s part of living the dream.  Situated on Old Route 66 directly across the street from the Old Town Plaza parking lot, Liu’s may not have been contemporaneous with the Conquistadores, but it sure seems that way. In May, 2014, the Central Grill and Coffee House replaced Liu’s at the 60-year-old edifice, in the process transforming the nondescript building from a rather austere and uninviting premises to a bright, welcoming diner.

The Central Grill and Coffee House seats 48 with outdoor seating on an expansive patio accommodating several more patrons. Walk in on a Sunday morning and you’ll swear there are at least 48 guests standing in line to place their orders. The process is rather brisk. While standing in line you’ll have plenty of time to peruse the menu and after you place your order, it’ll be delivered in a short while. Watching one order after another of pancakes being ferried to eagerly awaiting guests is part of the fun. Pancakes are one of many options on a rather wide-ranging menu that includes numerous breakfast favorites, burgers, sandwiches, salads, sides and “perks.” The latter would be a line-up of coffee and blended smoothies sure to wake you up on a sleepy morning. There’s enough variety on the menu that you’ll be hard-pressed to make a quick decision. Fortunately, as previously stated, you could be in line long enough to deliberate your choices thoroughly.

28 June 2015: Perhaps the most difficult choice to make is deciding from among the scone of the day, muffin of the day and sweet of the day. If the salted caramel sticky bun is available, it’s a no-brainer. This is a sweet treat which should be mentioned in the same breath as the fabled Frontier roll and the cinnamon rolls at San Marcos Cafe outside of Santa Fe. In other words, it’s in rarefied company. It’s even better when served hot with lots of melting butter. Calories be damned; just double-up on the treadmill.

25 November 2021: The aptly named and almost intimidating in size Grande Burrito  is probably even more dietetically devastating than the sticky buns. Roughly the size of a log of firewood, it’s engorged with the ingredients New Mexicans love on their breakfast burritos: scrambled eggs, potatoes, cheese and your choice of bacon, chorizo, ham, sausage or turkey sausage (live it up and have them all) topped with red or green chile (or both).   While five proteins on one burrito may seem rather excessive, it surprised me how well one flavors melded while still retaining individuality of personality. This is one of the best breakfast burritos to have crossed my path in quite a while. The red chile has a very pleasant piquancy while the green has the roasted nuances aficionados appreciate.

25 November 2021: For my Kim, a carne adovada burrito sans additional chile makes great sense. She contends that the chile in which the pork has marinated has a porcine-blessed flavor profile it might lose if the burrito was smothered. She was blown away by the sheer volume of pork with which this burrito is engorged. Tender tendrils of pure pork deliciousness marinated in chile practically made her swoon.  The breakfast version of the carne adovada burrito also includes scrambled eggs, cheese and onions, all of which work well together.

28 June 2015: Among the more intriguing sandwiches on the menu is one called the ABQ Western Sandwich, sliced brisket, smoked sausage, Cheddar and barbecue sauce on a toasted ciabatta bun. One of the things that make this an intriguing sandwich is that there is no smoker on the premises. Somehow, the brisket has the hint of smokiness that seems to indicate it spent time imbibing low-and-slow smoke. The smoked sausage doesn’t quite have the same discernible smoke notes, but it pairs well with the brisket.

30 July 2015: When the craving for a blue cheese burger hits and nothing else will do but you don’t want to take out a second mortgage to pay for it, visit the Central Grill where a bleu cheese burger can still be found for under a ten spot. Note that spelling. “Bleu” is simply a nod to the French word for blue, not any type of superior cheese (sorry, Francophiles). The bleu cheese burger is replete with the fetid fromage turophiles love (though for me, there’s never enough). With a creamy, pungent essence, it contrasts nicely with the sweet buns and the Angus beef.

30 July 2015: Just as New Mexicans revere the green chile cheeseburger, Minneapolis, Minnesota residents hold one burger in the highest esteem. They call it the “Juicy Lucy” and it’s essentially a cheese-stuffed burger which oozes molten cheesy goodness with every bite. Delicious though they are, they’re best consumed several minutes after receiving them or you risk burning the roof of your mouth. The Central Grill’s signature burger is called the Inside-Out Burger and it features Cheddar used as a stuffing rather than as a topping. It’s a good burger served with pickles, tomatoes, onions and lettuce on the side along with mustard, ketchup and Tabasco sauce on a condiment cozy. They’re served with your choice of French fries, sweet potato fries, onion rings, potato chips or tater tots.

31 July 2018: When I come home and tell my Kim I had dinner with my friend Bruce “Sr. Plata” Silver, her first question is “how was the chicken fried steak.”  Her second, “did you take another picture of Sr. Plata.”  Bruce and I have obviously become very predictable in our advancing geriatric progression.  As chronicled on Gil’s Thrilling…, we’ve been on a quest to find the best chicken fried steak in the Duke City metropolitan area.  The Central Grill is on a short list, one of the very best we’ve had.  It’s also they key component of one of the most generous plates: two eggs prepared any way you want them, a buttermilk biscuit, your choice of hash browns or papitas and a thick slab of chicken fried steak smothered in a creamy white pepper gravy.  Sr. Plata noted right off that the breading on the chicken fried steak was crispy on the edges and had a more prominent “chicken flavor” than others we’ve had.  The creamy white pepper gravy lends a smooth and personality-rich blanket of warm comfort to the thick slab.  It’s a great one.

While Breaking Bad devotees may not find one of their favorite Old Town area landmarks, if the pangs of hunger strike during their pilgrimages, they’ll certainly find a terrific diner and coffee house to sate them.