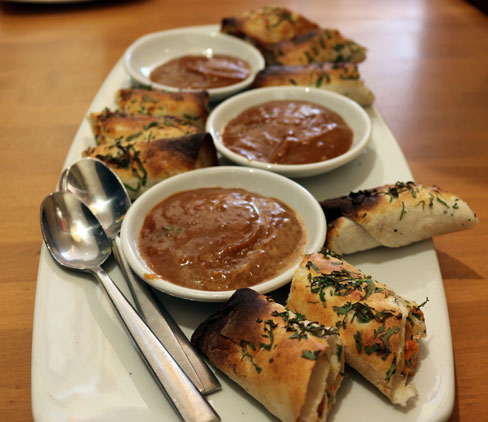 The appetizer which first caught our eye bore the name tortilla spring rolls. What a great idea! Why have we limited ourselves to boring tortilla roll-ups, tortilla pinwheels stuffed with cream cheese and sundry ingredients? There are three types of tortilla spring rolls, the most enticing of which was the Thai Chicken Spring Rolls, flour tortillas sprinkled with herbs and baked in the hearth oven stuffed with bean sprouts, scallions, carrots, cilantro and mozzarella served with an addictive peanut sauce. The peanut sauce is the topper, both literally and figuratively. As good as peanut sauce at many Thai restaurants, it’s the perfect dip for an otherwise very good starter, elevating it into an excellent introduction to CPK.

CPK’s pizzas are categorized as “original hand-tossed” and “crispy thin crust.” Though there are plenty of traditional toppings, we opted for pies topped as no other pizzas we’ve seen in New Mexico are topped. These are true California pizzas, constructed from imagination and creativity (not that the Land of Enchantment’s pizzaiolo don’t have these qualities). The first was a Pear and Gorgonzola pie (Bosc pears, sweet caramelized onions and hazelnuts topped with chilled field greens in Gorgonzola ranch dressing). Wow! This salad on a pizza is a winner thanks largely to the creamy, sharp Gorgonzola ranch which penetrated through the greens onto the thin crusted pie. The Bosc pears are sliced thin and are caramelized by the baking process, rendering them even sweeter, a nice contrast to the Gorgonzola.

Perhaps even more creative is a Jamaican Jerk Chicken pizza (spicy-sweet Caribbean sauce, authentic Jamaican spices, Nueske’s applewood smoked bacon, red onions and bell peppers). Make sure to ask for pineapples (from the fruit, not a can) for a tangy-sweet complement to the assertively wonderful ingredients that come standard with this beauteous pizza. Though you might be tempted to tell your server “Jamaican me crazy with this pizza,” your servers have all heard that before. Nueske’s applewood bacon is porcine perfection, as good a bacon as you’ll find anywhere.