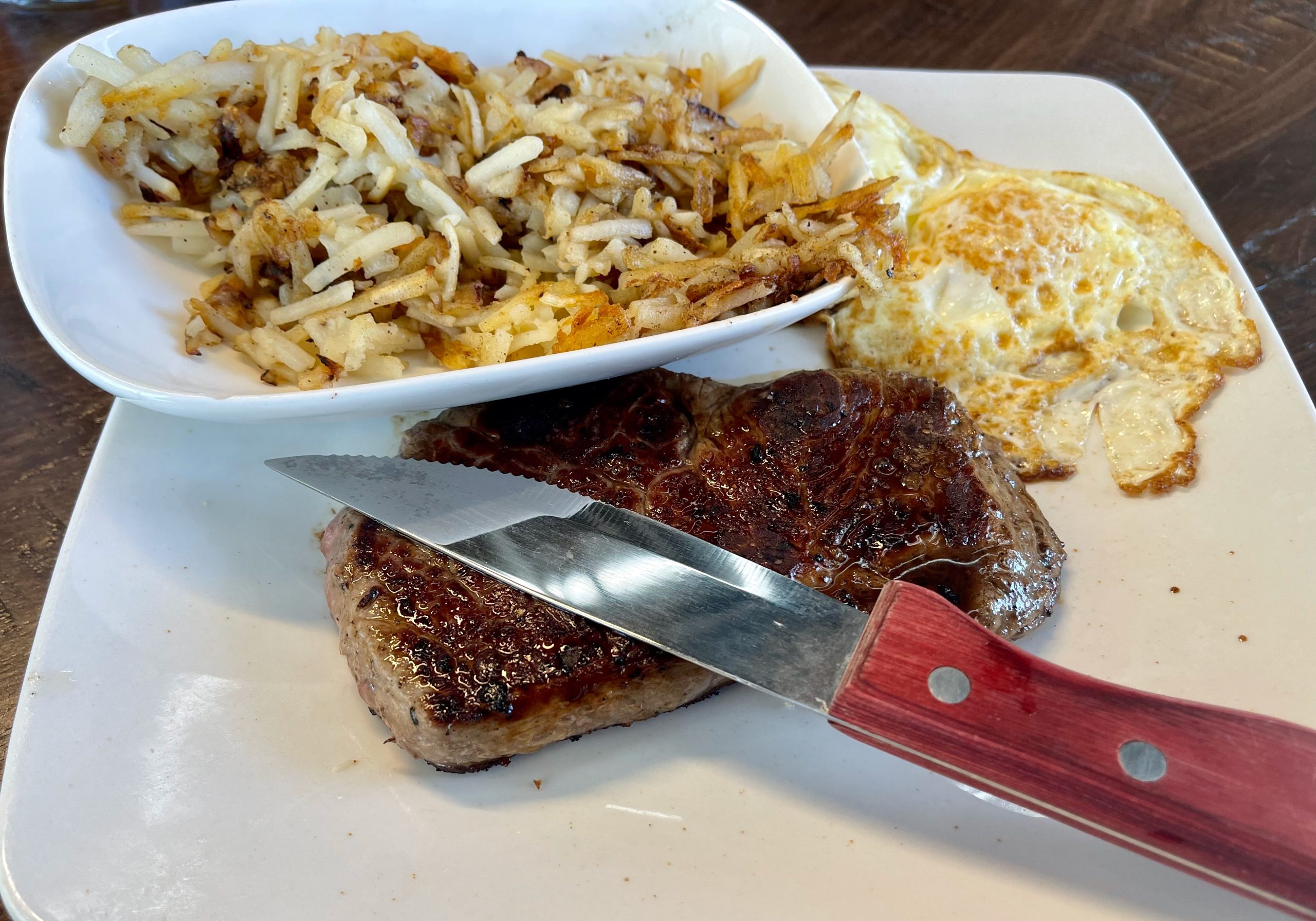 “Edible art” isn’t just some trite phrase pedantic food critics use when food has aesthetic values that delight our senses. Mankind has been been intrigued by the concept of food as art since the dawning of rational thinking. Prehistoric cave paintings such as those in Les Trois Frères in Ariège, in southern France, depict families gathering around the fire to share the foods they had prepared, an event made possible by the discovery of fire. Fire, it goes without saying, was also the catalyst behind men first wearing aprons emblazoned with “kiss the cook.”

Moving past prehistoric taggers scrawling graffiti on cave walls, edible art became more urban when Egyptians painted food on the walls of the great pyramids (ostensibly to nourish the dearly departed who had transitioned to the afterlife). During the halcyon days of the Greek and Roman empires, the depiction of food took on a more realistic tone when glass bowls of fruit were painted to denote the delicacies enjoyed by the one-percenters of the day (and some of those paintings still hang on the walls of many a Midwestern grandmother’s home).

The reverence with which mankind esteems food in art has expanded almost as quickly as our waistlines. Today, depictions of food festoon the walls of restaurants, hotels and homes (not to mention fraternity houses) everywhere. We’re also bombarded with images of food on the sacred altars of our living rooms, the hypnotically mesmerizing 70-inch flat screen televisions which render the Big Mac big once more. It’s apparent we find food not only nourishing, but strangely comforting and soothing. If we can’t have it plated in front of us, we’re mollified by paintings, photographs and videos of food, hence the term “food porn.”

In more civilized cultures, edible art has come to mean actual food (what a concept) plated beautifully…and looking good enough to eat. It’s a concept lost on Andy Rooney, the late curmudgeonly commentator on television’s 60 Minutes. Rooney didn’t like food that’s “too carefully arranged; it makes me think that the chef is spending too much time arranging and not enough time cooking. If I wanted a picture I’d buy a painting.” Japanese diners, for example, not only enjoy, they expect eye-pleasing, artful plating in which everything is where it should be for optimum harmony, balance and appearance, a sort of plate syzygy. The balance of color, texture and appearance makes diners give pause to reflect on how great everything looks before their taste buds confirm what their eyes already know.

Upon learning that a restaurant by the name of “Canvas Artistry” had opened in Albuquerque’s Nob Hill District, my first inclination was “just what we need, another pretentious and expensive restaurant with artistically plated highfalutin cuisine.” That notion was quickly dismissed upon discovering that Canvas Artistry’s chef was none other than Saul Paniagua, a creative culinary genius who can cook high-end stuff with the best of them, but prefers making his delicious creations affordable to the masses. Chef Saul Paniagua, a name many of you will recognize from his stints at 4 Aces Grill and The Standard Diner among others, is a South Valley native who’s twice left the Land of Enchantment to hone his formidable skills.

Chef Paniagua is longer in New Mexico.  He might not recognize the transformation of the restaurant for which he was the first chef.  In his place is Chef AJ Garcia who’s been with Canvas since the Nob Hill days. As with his predecessor, Chef Garcia crafts Canvas Artistry’s seasonal menu with the goal in mind to create “an elevated, yet comfort food experience.”  He’s doing so at a much larger, much louder and much more diverse menu in the heart of Albuquerque.  In 2021, Canvas Artistry relocated to the 3rd Floor Balcony Level of the One Central Building.  The views of Central Avenue from the expansive 3rd floor patio are spectacular.

At its new home in a much larger space, Canvas Artistry remains a gallery, restaurant, and cocktail bar. During the day, the 1,000-square foot plus restaurant and bar showcases three distinct entities in one: the Chakra Coffee Bar, Bosque Brewing Tap bar and Canvas Kitchen.  At 6PM, the space transitions to a rowdy, raucous nightlife venue in which artists can be observed painting while live bands perform during dinner service.  After 9PM, Canvas Artistry’s DJs take over, hyping up the crowd with various music styles that inspire dancing and revelry.  Walls are festooned with works that display their expressive freedom to express their individual visions guests are free to enjoy.

As we entered the elevator to ferry us to the third floor, we felt a momentarily sense of guilt.  This was our first visit to the Once Central complex in which we weren’t visiting the magnificent Tikka Hut.  Arriving at our destination, we were left agape at the multi-use space.  Not only was it much larger than we expected, it was much louder.  It surprised us that so many Burquenos would wake up on a Sunday morning and head to Canvas Artistry where the DJs played music at volumes no one with a hangover would appreciate.  It disappointed us that the regular menu–fittingly printed on an actual canvas–wasn’t offered on Sunday mornings (and not until 2PM).  Instead, a rather uninteresting breakfast-brunch menu was presented.

When a menu with “all the usual suspects” was delivered to our table at 1PM, we had two options–wait until 2PM for the daily menu with its much more assorted options or make the best of the brunch menu.  We opted for the latter, reserving the right to return for the more expansive menu at a later date.  Besides, when the “usual suspects” includes a behemoth breakfast burrito, brunch can never be a bad thing.  Roughly the size of a thick piece of firewood, this burrito is engorged with a plentitude of hash browns, bacon and (or) sausage and scrambled eggs covered with red and (or) green chile and shredded cheese.  Because the red chile includes cumin, I could not have my usual “Christmas” burrito.  That turned out well.  The green chile is as piquant as any I can remember.  That beautiful burn could wake up even the most somnolent of Duke City diner.  Available hand-held or smothered, it’s a good burrito.

My Chicago born-and-bred Kim is more “traditionalist” when it comes to breakfast and brunch.  That is “traditionalist” if you’re from the Midwest where breakfast and brunch consist largely of large slabs of beef.  Canvas Artistry’s steak and eggs plate doesn’t exactly cover the plate, but it’s satisfying and filling.  The steak is a six-ounce ribeye trimmed like crustless sandwich bread.  It’s seasoned well and much more tender than the stereotypical three-dollar steak.  Surprisingly, the hash browns aren’t the thawed, out-of-a-bag variety.  They have a homemade quality that makes them more than endearing.

Recent rains seem to have attracted more flies to Albuquerque than usual–even on the third floor of the One Central Building.  It brought to mind a joke by comedian Demetri Martin: “I was making pancakes the other day and a fly flew into the kitchen. And that’s when I realized that a spatula is a lot like a fly-swatter. And a crushed fly is a lot like a blueberry. And a roommate is a lot like a fly eater.”  We had to remain vigilant to ensure no flies got near our buttermilk pancakes, some of the most delicious we’ve had in Albuquerque.  Though light and fluffy, they’re thick and wonderfully absorbent of butter and syrup.

It’s too early to declare Canvas Artistry a masterpiece, but it might well be if you get to experience the daily menu.