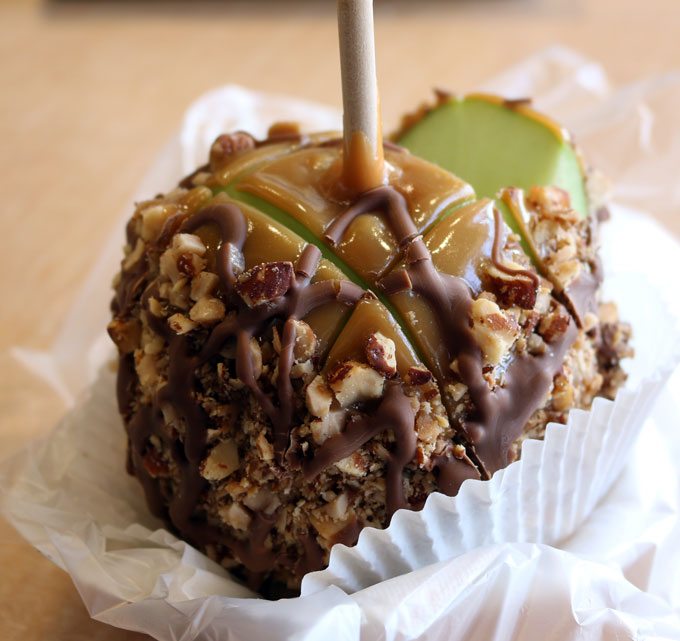 To whom should you turn when you want a recommendation you can trust for great ice cream? Your natural inclination is probably to ask a kid. Kids, particularly those in the age group two through twelve, consume more ice cream than any other American demographic. Alas, kids in the aforementioned age group are like Mikey in the old Life cereal commercials. They like everything (except maybe coffee flavored ice cream) and aren’t quite as discerning as ice cream paramours in other age groups. So, why not trust an adult for a recommendation? Research has shown that contrary to children, adults tend to prefer the same few flavors for which they’ve developed a preference over the course of their lives (talk about getting set in their ways and losing the sense of adventure).

So, to whom does this overgrown kid in an adult’s body turn for advice on great ice cream? Would you believe I get my ice cream advice from Stefan, one of my two favorite baristas at Rio Rancho’s sublime Cafe Bella. Here’s why. Baristas tend to have rather refined palates–they have to considering coffee has almost twice as many flavor characteristics discernible by human senses than wine does–and are able to discern flavor nuances and qualities most of us can’t detect. When barista extraordinaire Stefan, told me about his favorite place for ice cream, he didn’t just tell me he liked it. He gave me a detailed flavor profile analysis, describing flavors, ingredients, textures, milk fat content and other qualities only a connoisseur would understand.

When we stepped into ChocGlitz for the first time, owner-chocolatier Celeste Davis asked how we found out about her charming establishment. No sooner had we told her our barista recommended it than she responded with “oh, you must mean Michael” as in Michael Gonzales, the effusive owner of Cafe Bella. Michael, it turns out, frequents ChocGlitz with his beautiful family. It didn’t surprise us in the least that culinary professionals we respect so much would visit ChocGlitz which just might be Albuquerque’s very best chocolate and ice cream shop. It’s almost Rio Rancho’s very best chocolate and ice cream shop, too, being situated just south of the Presbyterian Rust Medical Center on Unser Blvd. near the demarcation line between the Duke City and the City of Vision.

ChocGlitz & Cream opened its doors in July, 2014 and almost immediately began garnering not only local accolades, but national attention. In February, 2015, ChocGlitz staffers created a five-foot chocolate sculpture depicting trees, fairies and woodland creatures for a Food Network program called Outrageous Chocolate. That painstaking effort took a bit longer than 200 hours. While Celeste doesn’t have to take nearly as much time in crafting the tempting chocolates on display daily at the shop, it’s obvious hers is a labor of love…and of deliciousness. ChocGlitz literally surrounds you with eye candy everywhere you turn.

Celeste hand-crafts almost all the chocolates sold at the store using fair-trade certified chocolate (ensuring cocoa farmers are paid fair wages and don’t use child or slave labor). ChocGlitz offers a treasure trove of beguiling treats such as fudge, caramel apples, caramel corn, chocolate-dipped Oreos, hand-made truffles, cheesecakes and many other chocolate specialties. A whopping 95-percent of the chocolates sold at ChocGlitz are made on the premises with a handful of fair-trade chocolates (and such rarities as Mallow Cups) brought in to complement the locally made product. All ice creams are also made on the premises.

21 November 2015: With a sensory overload of aromas and sights threatening to engulf us, we started our ChocGlitz adventure with ice cream: a scoop each of raspberry-red chile and salted caramel on a waffle cone for me and a scoop each of egg nog and pumpkin spice, also on a waffle cone for my Kim. The raspberries for the raspberry-red chile ice cream come from Heidi’s Raspberries in Corrales so you know they’re of the highest quality. Common denominators in all four ice cream flavors are smoothness, creaminess, delicateness and richness. These are the hallmark of ice cream greatness, the qualities of which Stefan bragged. Those qualities make for the type of ice cream with which you want to take your time, the type that releases its nuanced flavors as it melts on your tongue. A good amount of milk-fat contributes the quality of “mellowness,” coupling with the natural flavors to seduce your taste buds, not attack them.

21 November 2015: The Cracker Jacks jingle with which some of us grew up boasts of “candy coated popcorn, peanuts and a prize! That’s what you get in Cracker Jacks!” After sampling the bacon caramel corn at ChocGlitz, I became immediately convinced that Cracker Jacks got it wrong. Instead of candy-coated peanuts, Cracker Jacks should have used bacon. During the third annual Southwest Bacon Fest, ChocoGlitz introduced a number of bacon products which were very well received. The bacon caramel combines two great ingredients–possibly the very best caramel corn you’ve ever had and bacon, that addictive pork candy America loves.

11 September 2016: Though the raspberry-red chile ice cream could easily become a lifetime habit, how can you possibly know whether or not you’re going to enjoy another flavor more unless you try them all. That’s my attitude and the sole reason for not ordering it again. At ChocoGlitz there are no consolation prizes, no Miss Congenialities. Every flavor is a winner. That includes one scoop of malted milk balls ice cream and one scoop of Rocky Road on a waffle cone. The malted milk balls ice cream, in particular, is rich and utterly addictive with a nice malted milk ball to ice cream ratio.

11 September 2016: A cavalcade of chocolates in a glass display case would tempt the most disciplined of dieters. Every conceivable chocolate confection possible is available including some of which Willie Wonka never imagined. My Kim’s favorites are the chocolate Oreos covered in milk chocolate while my preference are walnut clusters, one milk chocolate and another dark chocolate. They’re so good they’ve never made it home where we can have them with milk. We’re barely out of the parking lot before they’re gone, pleasant memories left in their delicious wake.

30 October 2016: The painful trauma of having lost a tooth to an especially sticky caramel apple kept me away from the delectable autumn treat for several decades. It wasn’t until Dazzling Deanell told me how much she enjoyed the caramel apples at ChocGlitz that the thought of indulging in one even revisited my mind. Deciding which one to order proved a challenge. Behind a multi-level glass case at ChocGlitz, you’ll find irresistible artisanal caramel apples nothing like the boring monochromatic caramel apples of my youth. Caramel apples, it turns out, have become grown-up and gourmet. They’re made with imagination as well as love. The English Toffee Caramel Apple is so much better than my memories could recall, so good it’s still on my mind. A slightly sour Granny Smith apple coated in a rich, buttery English toffee drizzled in chocolate and sprinkled with a salty foil in the form of chopped pecans. It’s the perfect combination of sweet, savory and sour in an attractive package, sliced for easy handling.

If you’re not happy with the ice cream you’re finding in your neighborhood, there’s no guarantee your barista will be able to recommend something better. That is, unless that barista has been to ChocGlitz & Cream, quite possibly the best chocolate and ice cream shop in the metropolitan area.