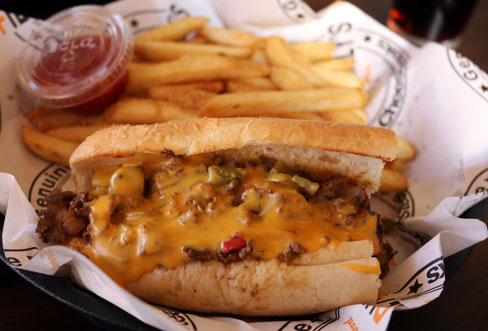 In 2008, Philadelphia, which translates from Greek to “the City of Brotherly Love” was named by Forbes Magazine as America’s fifth most miserable city, a ranking based on such factors as tax rates, commute times, violent crime, unemployment and weather. The city’s sports fans, in particular, are notorious for their “lack of fraternal affection,” mercilessly turning on even their own teams and players when they underachieve, regardless of past performance. In the annals of “what have you done for me lately” lore, the last time any of the city’s four major professional sports (football, basketball, baseball and hockey) teams earned a championship was in 2008, putting a stop to a fifteen year drought. Rather than being “lovable losers,” the Philadelphia fanatics have become mavens of misery.

How miserable is Philadelphia? In 1968, when he walked onto the field for the halftime show, jolly old Saint Nick was greeted by a chorus of boos and a fusillade of snowballs from Philadelphia Eagles football fans. That the city’s rabid sports fans would boo Santa should come as no surprise. Eagles fans also cheered when Dallas Cowboys receiver Michael Irvin lay injured and motionless on the turf, paralysis a real possibility. They assaulted the Washington Redskins mascot. They’ve been known to chuck bottles and batteries at opposing teams and officials. It got so bad that one year the city installed a jail, judge and court inside the stadium to deal with unruly fans.

While Philadelphia fans are known widely as the most obnoxious and violent in all of sports, you can’t argue that they’re also among the post passionate. That passion extends beyond sports, including into the culinary arena. Philadelphia is the birthplace of the American pretzel industry, producing up to eighty percent of the country’s pretzels. The City of Brotherly Love gave us Philadelphia Cream Cheese as well as scrapple (which you can find at Harry’s Roadhouse in Santa Fe), water ice, hoagies and perhaps most famous of all, the Philadelphia (or Philly for short) cheesesteak.

I half expected to be pelted with snowballs the first time we approached Filling Philly’s, a contemporary sports bar and eatery on Menaul just east of Louisiana. “We’re not in Philadelphia,” my Kim reminded me. Besides, the Eagles were battling the beleaguered Buffalo Bills on one of the restaurant’s five flat screen televisions and the eyes not affixed on the pigskin pugilism were trained on the cheesesteak sandwiches at their tables. The menu features seven Philly’s, some such as the Teriyaki Philly and the BBQ Philly heretofore not seen in this parts. Interestingly, there are seven versions made with chicken instead of steak. The menu also includes meatball subs, soup and salad and a few non-sandwich entrees.

Filling Philly’s, the brainchild of Colorado transplant Renee Vallejos, opened its doors in early November, 2015. Before launching her restaurant, she traveled to Philadelphia where she gleaned advice from purveyors of the city’s sacrosanct cheesesteak sandwich throughout the city. To ensure authenticity, she is even procuring the rolls from Amoroso’s, a legendary Philadelphia bakery. Perhaps in time she’ll have Duke City diners uttering “wiz wit” when ordering their cheesesteaks. “Wiz wit” is slang for “with Cheese Whiz “wit” onions,” and it’s pretty standard ordering vernacular in Philadelphia.

So, too, are soft pretzels, one of five appetizer options on the menu (the other options are fried pickles, chicken wings, cheese fries and chile cheese fries). In Philadelphia, soft pretzels are ubiquitous, a standard snack option at any time of the day or night. Filling Philly’s rendition are characteristically chewy and not nearly as salty as other pretzels with which you might be acquainted. They’re served with a melted cheese and provide a good, light snack as you anticipate delivery of your cheesesteak.

For trenchermen of my acquaintance, the most conspicuous misnomer isn’t any item on the menu, but the restaurant’s name itself. These hearty eaters will argue that the Philly’s aren’t nearly as filling as they would like–even if they order the “meal” option which includes a beverage and French fries. Indeed, the sandwich portion would probably constitute a half-sandwich at other sandwich restaurants. No matter how good these sandwiches are, for cost-conscious diners, size does matter. Make no mistake. These sandwiches are very good! They’re just not the behemoths on a bun to which many of us are accustomed.

Faithful readers recognize that my very favorite sandwich in New Mexico is the Green Chile Philly from Philly’s N Fries (formerly Itsa Italian Ice). It’s my sandwich standard, my basis for comparing every other sandwich, particularly every green chile Philly. Filling Filly’s version is good, better than a Miss Congeniality. The steak is finely chopped and perfectly grilled, the green chile registers no more than “mild” on my piquancy scale and the Cheese Whiz is gooey and doesn’t become the gloppy mess some processed cheeses do. It’s a moist and messy sandwich with plenty of flavor. The Amoroso’s buns are soft, chewy and delicious. They should be a standard sandwich canvas everywhere.

The “Classic” (steak, onion, Provolone, green peppers) is also quite good, albeit not large enough for my Kim whose portion preference is petite compared to mine. Every aspect of this sandwich is a winner save for portion size. At first bite, you’ll likely discern there’s something just a little different about the French fries in the “meal” order. The fries are seasoned with sugar and buttermilk. It’s an odd combination some will like. One day after having perhaps Albuquerque’s best fries at La Quiche Parisienne, we weren’t exactly blown over.

It’s hard to conceive of Philadelphia being a miserable city considering the widespread availability of quality cheesesteaks, the type of which Filling Philly’s has brought to Albuquerque. It may be as close to standing on the corner of 9th Street and Passyunk Avenue (where the cheesesteak was invented by Pat’s King of Steaks) as you’ll get in New Mexico.