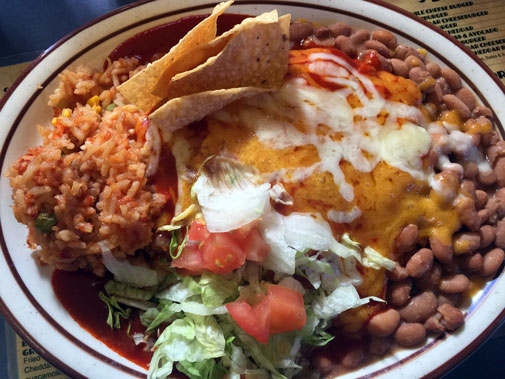 Until rather recently, if there was a wide diversity of opinion about Albuquerque’s restaurant scene, it wasn’t widely shared. Albuquerque’s two daily periodicals, the Albuquerque Journal and the Albuquerque Tribune as well as a number of alternative publications published weekly restaurant reviews, but opinions and observations expressed therein were rather one-sided. It wasn’t until about 2008 that crowd-sourced restaurant reviews really took off in the Duke City. Published in such online mediums as TripAdvisor (founded in 2000), Yelp (launched in 2004) and Urbanspoon (debuted in 2006), crowd-sourced review venues gave everyone an opportunity to become a “critic.” More than ever before “Joe and Jane Diner” had license to express rather colorful (sometimes bordering on libel) versions of their truth.

One of the predictable outcomes of this open, honest and direct culture became the wide swath of differing opinions. This illustrated how different people can have distinctly different perceptions—each a snapshot of time–of their experience at a restaurant. Reviews for some restaurants run the gamut with some reviewers extolling every aspect of their visit as “fabulous” while others lambaste every facet of their experience. It’s almost as if two different restaurants are being reviewed. The differences are sometimes so very pronounced that readers might be wise to recall the traditional story from India six blind men and an elephant. Haven’t heard it? It goes something like this:

The analogy here is that six different visitors to the same restaurant might–depending on the date and time of their visit, which chef prepared the meal, what dishes were ordered, how attentive the wait staff was, and numerous other factors—have a different experience than other guests, making their perceptions their truth. Before joining the Albuquerque Journal’s stellar columnist Elaine Briseno at Milly’s Restaurant in the Journal Center area, I consulted Yelp to read what others had to say. Despite one one-star rating (based largely on faulty air conditioning on the date of the visit) by one reviewer, Milly’s averaged a four-star rating over 21 reviews.

Elaine and I shared a laugh over one five-star review which indicated “Gordon Ramsey would have an issue with Milly’s mostly because the clientele is mostly elderly folks. It is obviously not a “hip” go to restaurant for the younger crowed.” As we looked around, we espied a mostly young, energetic crowd of blue- and white-collar professionals with a small spattering of fifty-something executive types. Elaine, who frequents the restaurant, told me she’d never seen a lunch crowd of “mostly elderly folks” at Milly’s. Hmmm, perhaps the reviewer is a youthful sprig who might perceive us (or at least me) as among the elderly.

As for Milly’s not being a “hip go-to restaurant for the younger crowd,” we might concede that at least in terms of ambiance, Milly’s may not appeal to some Generation Zs (born from the mid-or-late 1990s to the 2010s). From a culinary perspective, however, it should appeal to anyone who enjoys good food at a reasonable price served by one of the friendliest, most attentive wait staffs in town. As a demographic cohort, Milly’s itself is a “Millennial,” having been launched in 1983. The label it prefers is “community-style” restaurant in that it appeals to people from all walks of like (and ostensibly all age ranges).

The first Milly’s was established at 2100 Candelaria, N.E., with a location on Jefferson added later and a third currently in the planning stages. Milly’s is the brainchild of George Daskalos, a restaurant impresario who also co-owns Los Cuates. The restaurant, named his mother Milly, specializes in New Mexican, American and Greek food with a breakfast and lunch menu sure to please even the most discerning diners. That menu includes a number of salads, sandwich specialties, burgers, pastries and so much more. The tinkling of spoons as they stir the aromatic house coffee is almost melodic.

Elaine helped me navigate through the menu, pointing out the many dishes Milly’s does well. As is often the case the first time I visit a restaurant (and especially when caught up in great conversation with a friend), our smiling server had to return to our table three times before I was ready to order. Fortunately Elaine was savvy enough to order a bowl of green chile stew for us to share. Even if I didn’t like anything else, she was confident I’d love the green chile stew. Though described on the menu as a “seasonal” dish, it’s always on the menu according to our server.

21 January 2016: There would be a raucous outcry if Milly’s ever removed it from the menu. Quite simply, it’s among the very best green chile stew in town, a fragrant elixir redolent with perfectly roasted green chile of medium piquancy. The green chile stew is flecked with tiny red shards, the genesis of which we surmised is roasted red chile whose flavor profile is even sweeter and fruitier than that of green chile. Replete with bite-sized chunks of pork, this olfactory-arousing stew luxuriates in a large bowl it shares with potatoes Goldilocks would find “just perfect” (not too soft, not too firm). Frankly “just perfect” is an apt descriptor for the entire dish.

21 January 2016: Though listed on the menu as “Mexican” plates, several dishes are unmistakably New Mexican attitudinally (courtesy of New Mexico grown chile) and in the way they’re prepared. Both Elaine and our delightful server highly endorsed the beef enchilada plate (including pinto beans and Spanish rice) with red chile. Available either rolled or stacked (my preference), the enchiladas are engorged with ground beef and topped with a blanked of molten Cheddar. The red chile is relatively mild in its piquancy, but has a rich flavor that isn’t adulterated by cumin, Mexican oregano or other seasonings which tend to add astringent properties to chile. The beans are a poster child for how beans should be prepared while the Spanish rice is better than most. A pleasant addition to the plate are a number of crisp tostada chips formidable enough to scoop up the other components of the plate.

21 January 2016: Over the years Milly’s has cemented its reputation as a source of sumptuous sandwiches, offering some fifteen specialty sandwiches. Elaine’s favorite is the Turkey Crisp (turkey, Jack cheese, bacon, chile, avocado, sprouts, lettuce and tomato on your choice of bread), a towering creation served with your choice of potato salad, fries, chips, coleslaw or for a pittance more, cottage cheese, fresh fruit, a cup of soup or a small salad. The recommended bread for this sandwich is rye. Great choice! The lightly toasted rye is an excellent canvas for a textural and ingredient-laden masterpiece. What makes this sandwich “crispy” is bacon and lots of it. The butteriness of the avocado and prominent roasted flavor of the green chile are a terrific foil for the moist roasted turkey.

17 July 2018: In our continuing quest to uncover the best chicken fried steak in the Albuquerque metropolitan area, my friend Bruce “Sr. Plata” Silver and I have consumed a cavalcade of calories in the mouth-watering form of breaded cutlets drenched with gallons of gravy, queso or chile.  Whether thick slabs or thin sheets, our chicken fried steak adventure has been almost as been delicious as it’s been filling.  Solely from a flavor perspective, Milly’s rendition is as good as any, however, the actual size of the chicken fried steak doesn’t extend beyond the plate as Sr. Plata likes.  That’s not to say the plate isn’t generous.  After all, it includes two eggs, cream gravy, hash browns and toast (though Sr. Plata asked for beans instead).  Still, he would gladly have exchanged everything else for more of the chicken fried steak, a lightly-breaded, golden-hued cutlet.  Both the cream gravy and the green chile heighten the deliciousness of the chicken.

17 July 2018: Milly’s has one of the best selections of omelets in the city with eight interesting options all served with hash browns or home fries and toast.  For a pittance you can have your omelet topped with queso which would be a good option for all but the omelet I ordered, the Greek omelet (gyro meat, crumbled Feta, onions, tomatoes and bell peppers).  Queso would undoubtedly clash with the melted feta and nothing should ever get in the way of feta.  Queso, however, would have lent some much-needed moistness to this omelet.  Yes, it was more than a bit on the dry side.  Instead of toast, the Greek omelet comes with wedges of pita.  The hash browns are browned to a crispy texture, just the way I like them.

Despite diversity of opinion, savvy diners over the years have agreed that Milly’s offers something for everyone, whether it be the “younger crowd” or the “elderly folks” like me.