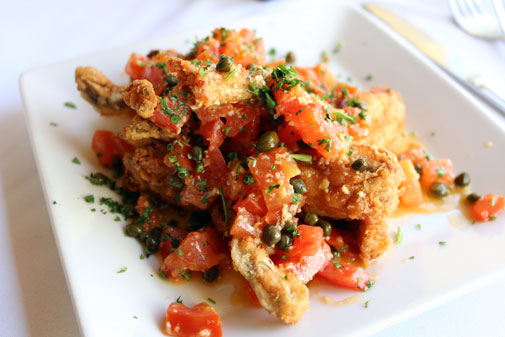 Pope Gregory the Great was a prolific writer canonized as a saint and recognized as a “doctor of the church.” Among musicians, singers, students and teachers, he is revered as a patron saint, a heavenly advocate who intercedes on their behalf. Among gluttons of the Middle Ages, however, the supreme pontiff was reviled. In his treatise Morals on the Book of Job, Pope Gregory essentially condemned them to Hell, a denouncement reflecting the strict austerity of the times. For gluttons, the unpardonable sin was in deriving too much pleasure from eating. Eating, or more precisely the pleasurable overindulgence in food, was viewed as an ungodly preoccupation with temporal and corporeal pleasures at the expense of spirituality.

Church leaders of the Middle Ages didn’t just denounce the derivation of pleasure from eating in a general sense. They listed five specific ways in which gluttony was a sin: eating too soon, eating too expensively, eating too much, eating too eagerly, eating too daintily and eating wildly. By Middle Age standards, many Americans are gluttons and would be condemned to an eternity in Hell for our enjoyment of food. Fortunately the provincial dogma regarding the enjoyment of food has been replaced by more “one dimensional” thinking that focuses on the sin of the inordinate desire to eat too much when there are needy going without food.

In The Science of Sin, Dr. Simon Laham posited that “If Pope Gregory the Great had it right, the French are going straight to Hell.” It’s a declaration that doesn’t sit well with the French who in 2003 petitioned Pope John Paul II to remove gourmandise (gluttony in English) from the list of seven deadly sins. For the proud French, gourmandise reflects shared pleasure and generosity—sharing food as a social activity. Gourmandise respects moderation and portion control and is wholly contrary to the priggish conformity to propriety that describes gourmets. Rather than a cardinal vice, the French argue that gourmandise is a theological virtue.

Alas, it’s not a virtue practiced often or well (or maybe not at all) in America where lunches tend to be hurried gobble-and-go affairs spent more attuned to the latest cat video on YouTube than on what we’re eating or with whom we’re sharing our meal. Contrast that with the gourmandise experience—a leisurely, three course, two-hour lunch spent in conversation with friends. Gourmandise is more akin to a marathon while the American dining experience has devolved into a sprint.

In Albuquerque, no one has been more instrumental in introducing the spirit of gourmandise or in providing fine French alternatives to the ubiquitous chile-laden cuisine that seems to define the city than chef Jean-Pierre Gozard. Chef Gozard started it all in 1975 with the launch of La Crepe Michel, a hugely popular restaurant that’s still going strong nearly four decades later. In 1979 he opened Le Marmiton, one of the four or five restaurants I’ve missed most from among all those which have closed since we returned to Albuquerque. From 1987 through 1995, Chef Gozard plied his talents in Casa Vieja, a Corrales landmark.

After leaving Casa Vieja, it looked for a while as if Albuquerque had seen the last of the über chef, but in 2008 he turned up at La Crepe Pierre, a highly regarded restaurant which eventually evolved into Chez Bob, another excellent French restaurant. By year’s end, Chef Gozard had launched Cafe Jean-Pierre, within easy walking distance of the Century 24 theater. At the close of 2015 and advent of the new year, Chef Gozard closed his eponymous restaurant to focus on Le Troquet Bistro on the intersection of 3rd and Gold in the downtown area.

Le Troquet occupies the charming space which served as home to P’Tit Louis Bistro for years. Fashioned like a turn-of-the-century Parisian bistro, the art-deco ambiance includes hardwood floors and furnishings with masculine black accents bespeaking of period authenticity and precise craftsmanship which is also apparent in the artisan construction of the hand-crafted art nouveau bar and other decorous touches. It’s a setting which just may inspire the spirit of gourmandise even among the most rushed diners.

The interior is cozy with fewer than a dozen tiny tables in personal space proximity to one another. The tables are obviously intended for dishes to be delivered in sequence, not for several dishes to be delivered at one time. Each table is adorned with linen tablecloths and napkins. A soundtrack featuring the soothing stylings of Edith Piaf and other French singers of decades past lend to a dining experience in which time seems to have stopped nearly a century ago

The menu is more timeless and surprisingly ambitious considering the relatively small and very intimate confines of the restaurant. One side of the two-page menu is dedicated to more informal “lunch-type” items. It lists soups, salads, hors d’oeuvres, sandwiches and quiches, warm plates and desserts. The other page lists nine dinner entrees and two appetizers. Those dinner entrees include several of the magnificent dishes which made Café Jean-Pierre one of Albuquerque’s finest restaurants of any genre. It’s a list of lavish deliciousness, each entrée making it impossible not to derive great pleasure from the indulgence of eating.

4 March 2016: Quite possibly the best soup on the menu is a soup du jour offering of cream of mushroom. If your benchmark for cream of mushroom comes from a red-labeled can, you’ll curse having wasted your life at your very first bite of Le Troquet’s soul-satisfying rendition. Rich, creamy and steaming hot, it is the essence of French comfort, replete with the flavor of heady, earthy mushrooms tinged with a nuanced hint of white wine. It’s the type of soup which will inspire diners to close their eyes and luxuriate in swoon-worthy deliciousness. Not surprisingly, this version is as good (if not better) than the cream of mushroom soup served at Café Jean-Pierre.

4 March 2016: With centuries of enmity between England and France, it stands to reason that name-calling would ensue as we learned during our three years in England. Whenever English citizens spoke of the French, the term “Frogs” was bandied about, the sobriquet “Frogs” apparently derived from the French propensity for enjoying frog legs. Frog legs are a delicacy not often found in restaurants across the Land of Enchantment, but Le Troquet has them. These mild-flavored gams are coated with a combination of garlic, herbs, fresh tomatoes and white wine…and no, they don’t taste like chicken (though there is a textural resemblance). Frog legs, in fact, don’t have much flavor at all. They’re rather bland and nondescript, hence the tendency for restaurants to sauce them or coat them in other ingredients.

4 March 2016: Though blessed with the wide availability of sandwiches dressed with every conceivable condiment, sometimes only the simplicity of a relatively unadorned sandwich will do. During our time in Europe, we were surprised at how much we enjoyed simple sandwiches constructed with no more than three or four ingredients. Nostalgia filled our hearts with every bite of the Jamon Beurre, a simple sandwich made with ham of Paris and butter on a baguette. That’s it! Three ingredients, no more. The rich creaminess of butter on a soft, moist baguette is the perfect repository for salty, savory, smoky ham. Though Dagwood might not appreciate its sparsity, we loved it.

4 March 2016: While veal scallopini is a traditional Italian offering, French influences can be added to produce a superb dish you’d be proud to serve and even happier to eat. Le Troquet’s Veal Scallopini Normande will please the most discerning palates. Thin, delicate veal medallions of veal are lightly floured and sautéed then deglazed with apple brandy and served with roasted apples (ostensibly from the apple orchards of Normandy, for centuries producers of Europe’s best apples). The veal is so tender you can cut it with a fork and so good, it may be lust, another of the seven sins, you’ll experience as you consume it with wonton alacrity. The veal is served with sweet, tender carrots and fresh haricot verts.

6 July 2016: My first experience with chicken cordon bleu was on a flight to London way back in 1979. The quality of airplane food back then was probably on par with the quality of food at most high school cafeterias. To say the dish didn’t impress me in the least is an understatement. While chicken cordon bleu was all the rage in French restaurants across the fruited plain back then, I don’t recall ever ordering it at any restaurant. That’s more than three decades of denying myself, all courtesy of a poor-performing airplane galley. Had Chef Jean-Pierre catered for the airplane, I might today count chicken cordon bleu as one of my favorite French foods. Le Troquet’s version, pulchritudinous poultry stuffed with ham and Gruyere cheese and topped with a sumptuous sauce made with caramelized onions, is easily the best I’ve had. Considering a small sample size, that’s not saying much about chicken cordon bleu, so let’s qualify the degree of my affinity for the dish by declaring it’s now one of my favorite French dishes.

In its annual “Hot Plate Awards” edition for 2019, Albuquerque the Magazine bestowed a well-deserved award to Le Troquet for its “hot mussels.”  “It takes precision, quality and a certain unique flair to earn a Hot Plate Award” and the hot mussels have “shown all those traits, and then some.”

4 March 2016: There are five desserts on the menu including the patisserie du jour (or pastry of the day). St. Gregory the Great would have frowned had he been presented with the option of beignets as he would certainly have succumbed to temptation. Four warm beignets heavily dusted with confectioners’ sugar and served with an apricot marmalade would have driven even Job to temptation. Surprisingly dense yet remarkably light, each beignet is a puffed-up piece of goodness. The apricot marmalade packs just enough of a fruity tang to serve as a foil for the beignets.

If it’s a sin to eat at Le Troquet Bistro where profound enjoyment is assured with every bite, Albuquerque has plenty of transgressors who prefer to think of themselves as enjoying the Lord’s bounty.