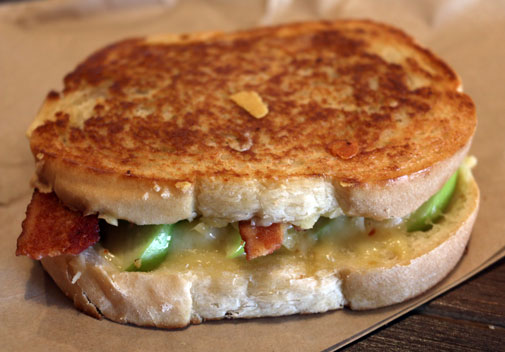 There once was a sandwich with cheese,
That quickly brought me to my knees.
Toasted, roasted. Oh sweet bliss.
I’d be completely remiss
Not to say, I’ll take two please.
~Ode To Grilled Cheese
Courtesy of Clean Eats, Fast Feets

Who can ever forget Adam Sandler lovingly constructing “the greatest sandwich in the world” for Paz Vega in the 2004 comedy-drama-romance Spanglish? Relying heavily on high-quality ingredients, the sandwich–constructed from a rustic white bread, Monterey Jack cheese, mayonnaise, butter lettuce, fresh tomato slices, bacon and a fried egg over-easy–even manages to pull the attention of every XY-chromosome paired, red-blooded viewer away from the sultry Spanish siren.

Then there’s the scene in the movie Chef in which Jon Favreau’s character constructs a simple grilled cheese for his ten-year-old son. Though the scene has our rapt attention from the moment butter is slathered on a slice of bread, the first sizzle on the grill evokes salacious salivation. When the sandwich is sliced in half and a cascade of molten cheese slowly oozes out from between perfectly golden slices of crisped bread, our wanton lust reaches a crescendo. We have to have a grilled cheese sandwich now!

Fortunately for us, Cheesy Street is a frequent guest of the Westside Marble Brewery not too far from our humble abode. Cheesy Street is easy to spot with its shamrock-green countenance and long queues of hungry diners waiting to place their order. The Westside Marble Brewery is a perfect host. Place your order at the food truck’s order counter and you can saunter over to the comfy confines of a very friendly watering hole where your order will be delivered in due course. If you don’t partake of adult beverages, the Brewery offers excellent non-alcoholic libations (and they’re not the usual Coke or Pepsi suspects). Ostensibly they all pair well with grilled cheese.

Only five grilled cheese sandwiches graced the menu during our inaugural visit, each one a tempting combination of flavor and innovation. We did a double-take at seeing The Dubliner, a grilled cheese sandwich sharing the name of one of my favorite burgers from The Placitas Cafe. Described as a “St. Paddy’s Special” constructed from “decadent Irish Cheddar cheese with tart green apple slices,” this is a superb version of grilled cheese food porn made even more sultry with bacon. Dubliner Cheddar has a distinctive flavor, imparting a sweet, lingering aftertaste. Despite a firm and slightly dry texture, it melts nicely. The richness of the molten Dubliner pairs magnificently with the tartness of the green apples and the smoky saltiness of the crisp bacon.

My Kim’s choice, Spaghetti Grilled Cheese, is aptly reflective of her playful nature. As described on the menu this sumptuous sandwich “sounds funny, tastes amazing.” Between two golden-hued slices of bread grilled in garlic butter you’ll find mounds of sausage spaghetti topped with mozzarella and Parmesan cheeses. Strands of spaghetti escape their crispy confines on all four sides, but unlike with their plated brethren, you won’t have a red sauce mustache from slurping them up. If you’ve always enjoyed the combination of spaghetti and garlic bread, you’ll enjoy this Italian inspired sandwich.

Few food pairings go as well as grilled cheese and tomato soup. Cheesy Street’s homemade tomato and basil soup is not only soul-warming and comforting, it’s healthy, always vegetarian and gluten-free. It’s not especially thick or creamy, but it does accentuate the acidity of tomatoes and the brightness and freshness of the basil very well. This is the type of soup that transcends the seasons; it’ll be good any time of year and with any type of weather.