A Taste of the Caribbean – Albuquerque, New Mexico 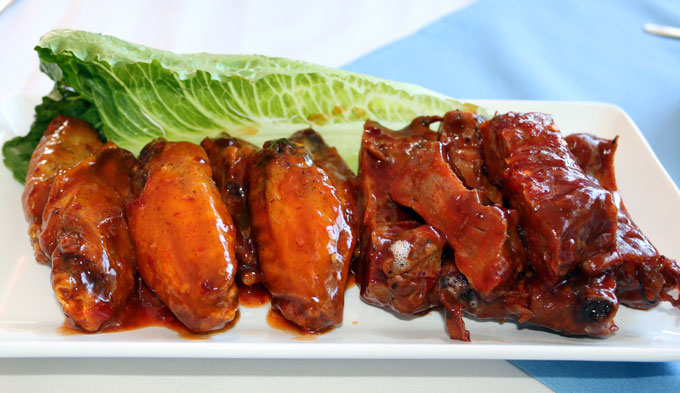 One of the most hilarious from among so many classic Seinfeld vignettes transpired in an episode fittingly entitled “The Comeback” which first aired in 1997. During a business meeting, the ever irascible George Costanza is unabashedly stuffing his face with shrimp when Reilly, a co-worker, notices his gluttony and remarks “Hey, George, the ocean called. They’re running out of shrimp.” Unable to retaliate with a quick retort, the slow-witted George obsesses about the perfect comeback and recreating the encounter so he can deliver it. Ultimately he crafts a rejoinder he finds witty, but which his friends dismiss as nonsensical. Bringing in a tray of shrimp he begins to cram into his mouth predictably evokes the “running out of shrimp” comment which had so torqued him off. When George responds with “Well, the Jerk Store called and they’re running out of you,” Reilly shoots back with “What’s the difference? You’re their all-time best seller.”

You know you’re food-obsessed when the first thing that comes to mind when watching that episode (or the Steve Martin movie “The Jerk”) is jerk chicken, jerk pork, jerk goat, jerk fish, jerk vegetables and the wondrous jerk seasonings which bring so much invigorating flavor to any item on which they’re used. To me, a “jerk store” is any restaurant which offers the incomparable flavors of the Caribbean. There haven’t been too many jerk stores…er, restaurants in New Mexico, but that’s not for lack of trying. Several attempts at introducing New Mexicans to Caribbean cuisine have been almost as short-lived as Rhonda Rousey’s consciousness when Albuquerque native Holly Holm kicked her in the head.

Perhaps, you might wonder, prospective diners are confused about the term “jerk” which they typically use as a pejorative to describe politicians. While that usage is correct, a Caribbean restaurant serving jerk doesn’t mean it’s serving politicians. The term “jerk” is a derivative of the Peruvian word “charqui,” a term for dried meat strips similar to what we call jerky. It can be used as a noun and as a verb, as in “jerking” which means to poke holes in the meat so the spices can penetrate more deeply. Jerk refers to a way in which meat, vegetables or fruits are seasoned and cooked. Seasoning is a delicious art form typically highlighting the bold flavors of pimento (allspice) and Scotch bonnet peppers (a close relative of the habanero). Meats are marinated and slow-cooked over pimento wood.

Curry is so prominent in Caribbean cuisine that its curry aficionados probably wouldn’t mind if the region was rechristened “Currybbean.” While the renaming thing is a silly stretch, it’s an understatement to declare curry is merely beloved in the Caribbean. As with so many spices frequently associated with the Caribbean, curry originates from another part of the world with a cuisine of a similar make-up. Curry was brought to Caribbean in the 19th century by indentured Indian workers in the British sugar industry. Its earthy brightness and a unique flavor profile which includes sweet, savory and pungent elements fit right in with the Caribbean culinary practice of using spices liberally.

A Taste of the Caribbean had been open for nearly six months on the day we first visited, but we had a feeling of déjà vu when we walked in and imbibed the familiar invigorating aromas of jerk spices and curry. We had previously experienced those familiar aromas at the Albuquerque Pavilion at Expo New Mexico on the State Fairgrounds. After eleven years at that temporary, event-driven location, A Taste of the Caribbean (El Sabor Del Caribe) now has a permanent home on Central Avenue directly across from Johnson Gymnasium on the campus of the University of New Mexico. It’s a bright, airy venue with vibrant signage and aromas which waft toward the street like the call of a siren.

Hanging from the ceiling are the flags of the Caribbean nations, each banner seemingly more colorful and bright than its neighbor. The dining room is homey and small, but not crowded. White linen tablecloths adorn each table. Because the restaurant was short-staffed on the date of our inaugural visit, we ordered from the counter, but thereafter our efficient server (who was doubling as chef) was a frequent visitor to our table…and a very gracious host. An old-fashioned backlit menu is posted over the doors to the kitchen, but you’ll be more prepared to order if you peruse the colorful menus on the counter’s sideboard.

The menu is not a compendium of all things Caribbean cuisine, but it does provide a good representative sample of some of the best the region has to offer. As you peruse the menu, all-the-while changing your mind umpteen times, start your island experience with a refreshing glass of Caribbean Red Stuff, a lively herbaceous elixir made from sorrel, a perennial herb which grows in the region. You’ll be hard-pressed to limit yourself from among the ten appetizers, four sandwiches (including a “Caribbean Sandwich” which reads just like a Cuban sandwich) and three salads. There are only two items—curry chicken and jerk pork—on the lunch menu, but if the enterprising chicken has dinner options ready, you can also order from the dinner menu. Daily specials are also available.

Must-have items from the starters start with the Caribbean Mango Habanero Chicken Wings, six luscious wings lacquered with a gleaming red-orange sauce. That sauce is both more pulchritudinous and more piquant than Buffalo wing sauce. It’s also much tastier. The combination of sweet fruity mango and sweet-piquant Habanero is pure dynamite. Habaneros, but the way, aren’t just about heat. They’ve got a pleasant sweetness that really comes across on this sauce. Six wings per order are enough to addict you to these fried fowl wings laced with addictive deliciousness and enough heat to get those endorphins going. Almost as wonderful are the Virgin Island Spicy Ribs, a half-dozen of the most meaty and delicious ribs this side of Jamaica. The sauce is brushed on generously, imparting its own blend of savory and piquant taste elements as well as a reddish hue somewhat reminiscent of New Mexico’s own red chile.

Our benchmark—the standard of excellence—by which we judge jerk chicken is Talking Drums, the delightful West African gem about two miles west of this restaurant. Toyin’s rendition of jerk chicken is assertively flavored and has a beguiling “get you high” fragrance you’ll smell in your dreams. A Taste of the Caribbean’s version isn’t quite as assertive. In fact, my Kim was grateful for the small ramekin of jerk sauce served on the side. Though she’s not a fire-eater like her asbestos-tongued husband, she would have liked more emphasis on the piquant elements of jerk seasonings. The jerk chicken is served with a vegetable medley and rice.

Much like chicken feet, a dim sum delicacy we enjoy at Ming Dynasty, goat is one of those dishes you might ask yourself if it’s worth all the effort. As with chicken feet, goat takes a lot of time, effort and care to eat. It’s a very bony and lean meat that can be chewy and difficult to extricate off the bone. Having grown up eating cabrito, it’s always been a labor of love for me. A Taste of the Caribbean’s goat curry has many pleasing aspects—and some detractors. The curry is delicious, albeit a bit on the watery side. It could use more of those perfectly prepared potatoes and maybe some carrots. Pulling meat off the bone is a manual task performed with your hands and teeth so you’ll need to wash your hands thoroughly afterwards.

After all the assertively spiced foods, you’ll want something just slightly sweet, golden brown and achingly tender to bring you down to earth. You’ll want fried plantains, the melt-in-your-mouth dessert or accompaniment enjoyed throughout the Caribbean. The best fried plantains start with a plantain that is beyond ripe, almost black. This ensures the sugars break down and caramelize when you fry them, giving them the texture and flavor you desire. That’s how they’re made at A Taste of the Caribbean.

The Caribbean and all its lively flavors are now available in Albuquerque and the only water you may have to cross to get there is the Rio Grande. Trust me–you’d swim a piranha-infested river to get to those Caribbean Mango Habañero Chicken Wings!

4 thoughts on “A Taste of the Caribbean – Albuquerque, New Mexico”