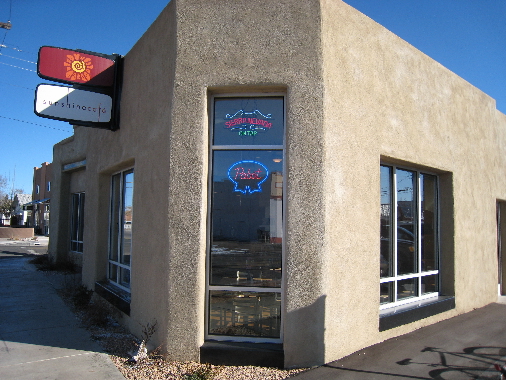 A gloomy, gray winter day in Minnesota was the inspiration for John Denver’s number one song “Sunshine on My Shoulders.” During a visit to the Gopher State in 1974, he experienced the type of “cabin fever” with which many New Mexicans are familiar after one gloomy winter day after another (ask anyone from Chama).  Minnesota, as we know, is a far cry from New Mexico when it comes to winter warmth and sunshine. Still, after the winter of 2007-2008, many New Mexicans are able to empathize with Denver’s being ready for spring and wanting to go outdoors again where the sun itself can make you feel good.

Albuquerque boasts of 310 days of sunshine, making it an ideal milieu for outdoor activities year-round. With a mile-high elevation, ours is a penetrating sun made warm and bright thanks to our rarified, thin air.  It’s a rare season in which Duke City residents are stranded indoors for too long without the life-giving, Vitamin-D imparting rays of our sun.  Even when the thermometer says it’s cold outdoors, New Mexico’s shining sun cuts the biting cold. It’s no wonder so many of us are sun-worshippers (in a secular sort of way).   It’s also no wonder the idiom reflected in John Denver’s song, “like a ray of sunshine” typically means someone or something that makes you happy…such as the 2007 launch of the Sunshine Cafe on Albuquerque’s historical Mountain Road.

In recent years the Mountain Road area has experienced significant commercial renovation which has both modernized time-worn structures built decades (if not centuries) ago while preserving their historical integrity. Mountain Road itself was used by the Spaniards as early as the 1700s.

The Sunshine Cafe is located in the building that for generations housed the Sunshine Market which was opened in 1925 by the Puccetti family. Vestiges of the market are still in evidence–a wooden door to the market’s meat locker, exposed roof trusses and other wood accents taken from the market.

The Sunshine Cafe is indeed a welcome addition to a venerable area. Within easy distance of both Old Town and Downtown, it has the feel of a true neighborhood cafe–and its windows allow in plenty of sunshine.

The Cafe serves breakfast, lunch and dinner and follows in the archaic footsteps of its predecessor with a small market offering a limited selection of comestibles (mostly daily use items) as well as beer and wine with an international flair.

Two daily blue-plate specials are offered after 5PM and are posted on the daily board. They are a popular offering for diners fortunate to have Mountain Road on their commute route home.

The Sunshine Cafe is absolutely pristine while maintaining a welcoming, warm ambience. Walk in and you’ll magnetically drawn to the glass cases showcasing some of the cafe’s sumptuous fare. This treasure trove includes salads and foods which can be purchased by the pound as well as a nice selection of pastries and desserts.

A selection of house-roasted meats, cured cheeses and gourmet cheeses can also be purchased by the pound. The Cafe also offers a wide assortment of coffee drinks made with New Mexico Aroma Coffee and a broad range of loose leaf teas from the New Mexico Tea Company.

The Sunshine Cafe is one of an increasing number of Albuquerque and Santa Fe restaurants embodying the locavore spirit–offering locally grown and produced foods as much as possible. Not only does it provide a sense of community, it supports hard-working New Mexicans.

The architect of the sumptuous menu is Scott Downs, formerly of the Artichoke Cafe. The menu features gourmet sandwiches, comfort foods and breakfast worth climbing out of bed for even on an overcast winter day. It’s a menu that will inspire many future visits.

A nice selection of lighter fare is laden with healthful options and not just salads. Housemade hummus and toasted pita wedges with Kalamata olives and feta cheese tops the list. All salad dressings, including a green chile dijon, are made from scratch.

Gourmands who for years lamented the absence of inventive gourmet sandwiches in the Duke City can add the Sunshine Cafe to the expanding list of sandwich pioneers (including Relish and Cafe Roma) serving extraordinarily creative and delicious sandwich fare.

A nice selection of panini gourmet sandwiches are served warm and include a Cubano sandwich with slices of house-roasted ham, Swiss cheese, dill pickles, grainy mustard relish and pickled shallots on a baguette.

Breakfast entrees include a somewhat unconventional smothered breakfast burrito fashioned on an enormous whole wheat tortilla which is engorged with eggs, potatoes, white Cheddar cheese and black beans all smothered in a green chile sauce. For a mere pittance you can raise the burrito to another plain by adding smoked bacon. This is an excellent burrito redolent with the inimitable aroma of roasted green chile and replete with fresh ingredients which meld concordantly to give your taste buds a ray of sunshine feel.

The green chile is a starring attraction on the green chile chicken omelet, a two-egg concoction of house-roasted chicken, green chile, fresh herbs and fontina cheese served with oven-roasted potatoes.

If you’ve ever bemoaned the fact that the prevalent taste of some omelets is egg, you’ll love this beauty. Sure the egg is integral, but it doesn’t overwhelm other flavors. Each forkful explodes with flavor combinations which go especially well together. The roasted potatoes are exceptional!

Lunchtime’s light fare includes housemade hummus with toasted pita wedges and crostini (pictured at right). The hummus is rich and creamy and includes a dousing of chili oil. It is a very good hummus, but could be improved even further with more garlic.

Served on a bed of Romaine lettuce with this starter are several Kalamata olives and shards of coarse, grainy goat cheese. There are many flavor combinations to be had with an order of this terrific plate.

It seems every Albuquerque sandwich purveyor has a variation of the Cuban sandwich on the menu and the Sunshine Cafe is no exception.

The Cubano is lightly toasted panini style and is sliced diagonally. It may be a very good Cuban style sandwich, but if you make the mistake I did, it may not leave the desired impression.

My mistake was in consuming both mine and my Kim’s Pepperonici, an exceptionally strong pickled chili of medium piquancy. The Pepperonici was so lip-puckering tart that it dulled my taste buds. Worse, I also consumed two Cornichon gherkin pickles, a briny, vinegary pickle that further obfuscated my sense of taste.

The most prevalent taste and one I normally appreciate immensely was the grainy mustard, yet another tongue-tingling ingredient to what might otherwise be an excellent sandwich.

This is a very good BLT, not nearly the equal of the BLT offered at Gecko’s, but a very flavorful, albeit salty, rendition of America’s favorite non-burger sandwich.

Visit the Sunshine Cafe’s Web site and, if you hadn’t figured it out already, you’ll learn that the words “freshness, quality and community” are more than words. They’re the standard to which the Cafe holds itself to in everything it does–from the use of locally-grown produce to the house-made products on the shelves and the interesting items that populate the menu. The Sunshine Cafe lives up to its name!