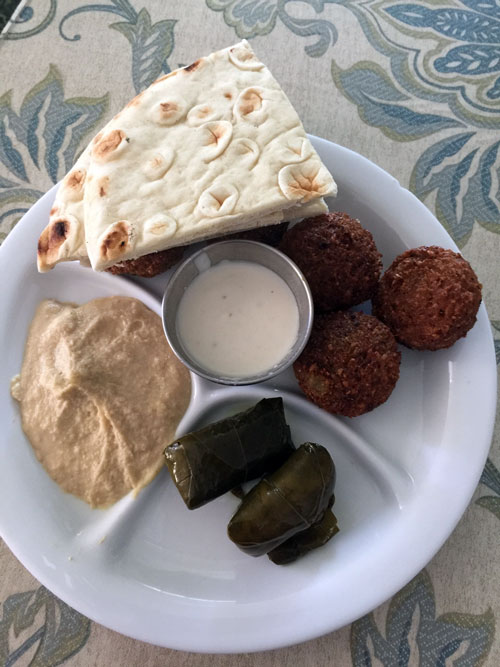 What do you do when you’ve just finished saving the world? Because warding off a vicious onslaught of alien invaders is bound to make you hungry, you just might have shawarma. That’s what the Avengers, Earth’s mightiest superheroes did. Lying on his back amidst the rubble of a demolished building after helping vanquish a phalanx of evil extraterrestrials, Iron Man doesn’t revel in victory or proclaim “We’re number one!” He asks his superhero colleagues “You ever try shawarma? There’s a shawarma joint about two blocks from here. I don’t know what it is, but I want to try it.” After an intense and lengthy fight scene, his seemingly innocuous statement breaks the tension and reminds viewers that after working hard, even superheroes deserve a well-earned meal.

After credits have rolled, the entire Avengers team is shown assembled at the shawarma joint, most still attired in full superhero regalia. The battle weary Iron Man (Robert Downey, Jr.), Captain America (Chris Evans), The Hulk (Mark Ruffalo), Thor (Chris Hemsworth), Black Widow (Scarlett Johansson) and Hawkeye (Jeremy Renner) eat (and ostensibly enjoy) their shawarma while the restaurateurs go about the business of sweeping the floor and cleaning up. As the Avengers’ collective exhaustion has rendered them silent, it’s hard to tell whether or not they enjoyed the shawarma. They’re too tired and beaten even to utter such customary expressions of appreciation as “mmm” or “yum” (perhaps Rachael Ray has copyrighted that superpower).

Because some of the Avengers movie was filmed in Albuquerque, my Kim and I wracked our brains trying to figure out where in the Duke City the “shawarma joint” could have been located. It didn’t look like any local shawarma joint with which we’re acquainted. We also wondered how a “genius millionaire playboy philanthropist” such as Iron Man’s alter-ego Tony Stark could have lived into his early 50s and not know what shawarma is. Thanks to a number of Middle Eastern Restaurants throughout Albuquerque, most of our fair city’s savvy diners not only know what shawarma is, they can tell you where to find the best shawarma in town. Yes, the Duke City does have several options…and most of them will elicit utterances of “mmm” and “yum.”

Talk about the effectiveness of product placement in Hollywood blockbusters. Worldwide increases in shawarma sales have been attributed to the Avengers movie. According to TMZ, sales of shawarma at one Hollywood shawarma joint, went “through the roof,” shooting up some 80 percent after the movie opened. Whether or not shawarma sales in Albuquerque were similarly impacted by the Avengers isn’t known, but it’s a certainty that if it took the Avengers movie to get you to try it for the first time, your second, third and fiftieth times ordering it will be because good shawarma has addictive properties.

As of May, 2016, Duke City diners have another shawarma joint where they can assemble. Sporting the descriptive appellation of Middle Eastern Foods & Kabobs, it’s housed in the space which once served as home to Kasbah Mediterranean Cuisine and prior to that to Guicho’s Authentic Mexican Food. Though it has a Central Avenue address, you’ve got to turn north onto Monroe to park in one of the restaurant’s few slots. The restaurant is on the smallish side, but has an homey appeal with shades drawn to keep the room cool. Music videos play from a television in the dining room. You’ll be invited to seat where you wish and a menu will be delivered promptly.

Menu offerings are relatively sparse, listing three appetizers, four plates, four kabob plates, a house salad, three sandwiches and one specialty dish (rack of lamb) not always available. Where the menu lacks in variety, it excels in price structure. There are only two items on the menu priced north of ten dollars. Everything else is priced for the year 2010. There are no burgers on the menu nor is there anything prepared with red or green chile. Meats are certified Halal which means the animal has to be killed and handled in accordance with Muslim religious rules. These rules make the meat halal, or permissible.

22 July 2016: Cost-conscious diners will appreciate the bargain-rich plates. The chicken shawarma plate, for example, is served with two dolmas, freshly grilled pita bread, hummus and your choice of salad or fries. It’s a lot of food. Though you’ll be tempted to spear the bite-sized strips of seasoned chicken with your fork, the more traditional way to eat shawarma is to create small “sandwiches” with the pita bread. A little hummus and a bit of tzatziki sauce and your taste buds will perform a happy dance. Sumac, that delightfully lemony reddish spice is sprinkled liberally onto the hummus though for me, even a bit more would have been better. For the dolmas (rice and dill wrapped in grape leaves), only tzatziki sauce will do. The salad if pretty routine stuff (chopped Romaine, tomatoes, onions, cucumbers sprinkled with feta cheese and lightly dressed), but very satisfying.

25 July 2016: There’s a tiny café in Israel employing a unique way to promote reconciliation. The restaurant offers a 50-percent discount to any table in which Arabs and Jews elect to sit together. That’s promoting peace one falafel at a time. When good falafel is served, it’s hard not to think of peace and love and other good things. Falafel (small orbs constructed of soaked chickpeas, coriander, garlic, cumin, salt and pepper) is one of the most popular foods in the world. Experience it for yourself in the form of a falafel plate (two dolmas, freshly grilled pita bread, hummus and your choice of salad or fries) at the Middle Eastern Foods & Kabobs restaurant.

25 July 2016: The menu offers a soup of the day served with pita bread. On my second visit, my server brought me a complimentary bowl of the restaurant’s vegetarian lentil soup, a warm and delicious elixir. Never mind that the day’s temperature was steadily climbing near the century mark, a good, hot soup has cooling properties that make the exterior heat tolerable. You can imagine just how much better that soup will be on a cold winter day.

16 April 2017: You don’t have to utter “Abra Kebab Ra” in order to find good kabobs in the Duke City, but you might think it’s sheer magic to find four kabob plates on the menu: lamb kabob, ground beef kabob, chicken kabob or a mixed kabob plate. What could be better than choosing a skewer from two of the three (lamb, chicken, beef)? The lamb and ground beef combination is a great choice! Meats are very nicely seasoned although both my friend Nader and I thought they were overdone, probably having spent too much time over high heat. As a consequence they were a bit on the dry side. The seasoning was a saving grace. Skewered vegetables (red, green and yellow peppers as well as onions), on the other hand, were perfectly done. Served with heshweh, pita and salad, the mixed kabob plate is almost large enough for two though you won’t want to share this delicious bounty. Heshweh is a surprising dish–long-grained Basmati rice, pine nuts, short wheat noodles, onions, raisins and green peas. It’s a delightful treat.

After an arduous day of waging war against tight deadlines and fighting work challenges, savvy diners make like the Avengers and assemble at Middle Eastern Food & Kabobs for shawarma and so much more.