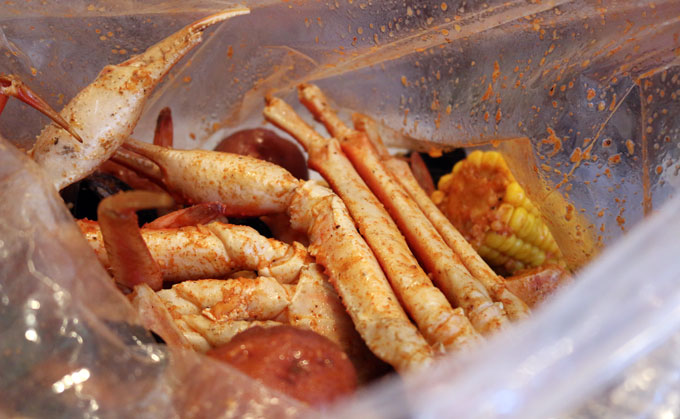 Another notion New Mexicans find implausible is the idea that very good to excellent seafood can be found within the landlocked borders of the Land of Enchantment. Since the rapid fire succession closure in the early 2000s of Cafe Oceana, the Rio Grande Yacht Club and Seagull Street, many diners considered Pelican’s Restaurant the sole surviving seafood restaurant in the metropolitan area. Just about the time the aforementioned trio were shuttering their doors, Mariscos Altamar began introducing Duke City diners to Mexican style seafood, a trend that caught on rapidly. Then in 2013, Down N’ Dirty Seafood Boil filled a real niche by offering a product unique to the marketplace, something that can’t be found anywhere else in the area. Its Cajun-style seafood boil concept was an immediate smash hit.

Just as as mighty forests start with one tiny fertile seed, niche markets tend to propagate as soon as entrepreneurs see an opportunity to get in on a good thing. In 2015, just about the time Down N Dirty opened its second restaurant (Los Altos Plaza on Wyoming), an aptly named competitor–Crackin’ Crab Seafood Boil–opened its doors near the Century Rio 24 theater. It didn’t take Crackin’ Crab long to expand, launching its own second instantiation just as 2016 was dawning. 2015 also saw the launch of Crab N’ Draft in the International District. In May, 2016, 99 Degrees Seafood Kitchen in Nob Hill followed suit.

Detractors might say the market is already saturated, but those of us “glass half filled” types can’t get enough. Landlocked Albuquerque has fallen in love with the seafood boil concept. With existing and planned locations soon to blanket the metropolitan area, favorites are likely to be based as much on proximity as to quality of the product. Living in Rio Rancho (almost as far north as you can go before you’re in the Santa Ana Pueblo), we longed for a seafood boil restaurant we didn’t have to drive thirty miles to reach. With the opening of Crackin’ Crab at the McMahon Marketplace on Unser just north of the demarcation line between Rio Rancho and Albuquerque, our wish has been granted.

The name Crackin’ Crab speaks volumes about the concept. At its mechanical essence, a seafood boil is little more than seafood, water (or beer) and spices (exquisite, flavor-packed, seafood enlivening spices). At its spiritual essence, it’s so much more than that. A seafood boil is about fun and frolic. It’s about sharing succulent seafood with friends and family. It’s about getting your hands and face dirty and enjoying every minute of it. Even though the nearest sand and surf (Tingley Beach doesn’t count) is more than 800 miles away, Duke City diners can still enjoy the spirit of the seafood boil. That spirit is alive and well at the Crackin’ Crab.

With an ambiance almost equal parts nautical and nondescript, the Crackin’ Crab is a sole, elongated dining room with a seating capacity of about fifty guests. Weather-permitting, another twenty-five diners can enjoy themselves on the patio. Several strategically placed wall-mounted flat screen televisions might get your attention early, but only until your seafood bounty arrives at your table. “Pounds of Crackin'” is set at market price by the pound: blue crab, Dungeness crab cluster, snow crab cluster, king crab legs, lobster, black mussels, green mussels, crawfish (in season), clams, scallops and shrimp (headless or with heads). You can’t catch this stuff on the Rio Grande. If you prefer your seafood fried, a netful of fried options are also available: calamari, shrimp, seafood, oysters and softshell crab. Landlubbers can have fried chicken tenders.

Any order combination of three pounds will also yield one corn on the cob, one sausage and one potato, but you can also order additional portions of each in any quantity you desire for a relative pittance. Two sauce options are available to enliven your seafood boil–an Old Bay Cajun sauce and a lemon pepper sauce, both available in mild, medium or hot. My penchant for piquancy goes out the window with seafood. Any spice level beyond medium obfuscates the natural sweet and briny flavors of seafood. At Crackin’ Crab even the medium sauce is as incendiary as hot chile at some New Mexican food restaurants.

11 September 2016: Your best bet whether you’re a value conscious diner or you want variety in your meal is the family bag, a veritable boatload of beauteous seafood. Your yield is one pound of snow crab, a half pound of headless shrimp, a half pound of scallops and a half pound of black mussels along with one corn on the cob, one potato and one Andouille sausage. That’s two-and-a-half pounds of succulent seafood for about forty dollars (as of this writing). Being a lazy eater, my preference is for seafood requiring no peeling or cracking. Extricating the sweet meat, no matter how delicious, is just too much work and I seem to lack the manual dexterity to use the cracking appliances provided. My Kim would rather extract the crab meat for me than to see me wreak mass destruction on the claws.

11 September 2016: My favorite item in the family bag is the scallops (and not only because there’s no peeling or shelling involved). Crackin’ Crab serves silver dollar sized scallops, each as sweet, rich and deliciously decadent as possible. The shrimp are sizeable enough for the term “shrimp” to be an oxymoron while the black mussels probably benefit most from the Cajun sauce. Because couples might not remain together if they had to split just one Andouille sausage, potato or corn-on-the-cob, you’re well advised to order at least two for each of you. The spicy, smoked Andouille sausage is always a treat.

30 October 2016: My friend Larry McGoldrick, the professor with the perspicacious palate, quotes the two things you need to know about Old Bay Seasoning: (1) It’s great on seafood; and (2) It’s great on everything else. Sprinkled lovingly on all the contents of the family bag (which you’ll remember, includes the corn-on-the-cob, Andouille sausage and potatoes), the seasoning penetrates deeply, imbuing the seafood with a blend of 18 herbs and spices. During our inaugural visit, we opted for the medium piquancy which proved more incendiary than much of the green chile served in some New Mexican restaurants. The source of that piquancy is nothing more than red pepper, black pepper and paprika. Lemon pepper, the seasoning of choice during our second visit, seemed to emphasize the flavor of coarse ground pepper more than the tanginess of lemon peel. At “mild,” it allowed the seafood to shine.

Crackin’ Crab has cracked the line-up of seafood boil restaurants par excellence in the metropolitan area. As if terrific seafood isn’t enough, when you’re done you can take your receipt two doors down to the outstanding chocolatier ChocoGlitz & Cream and you get a ten-percent discount on your order.