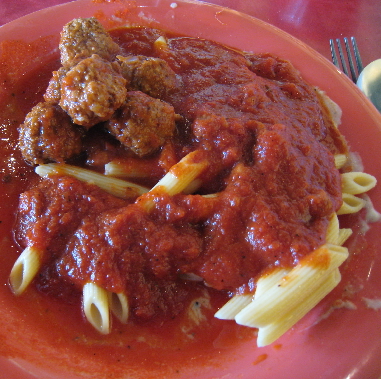 Let’s call the whole thing off.  If the Roman Catholic Church in the 16th century had had its way, the tomato might not be a ubiquitous ingredient in the cooking of many cultures today.  So, just what is it about the seemingly innocuous tomato that once earned it a scurrilous reputation in the Church, the type of reputation which made it the  Paris Hilton of the nightshade family?  Brought to Europe by the Spanish conquistadors, it was initially viewed with apprehension, thought not to be edible but purely decorative–and poisonous.  Leave it to the French to change that perception by ascribing aphrodisiac properties to what they called pomme d’amour or love apple.  This prompted the Roman Catholic Church of the time to declare the tomato the “fruit of the devil,” a sinful indulgence.

The scandalous tomato, its sensuous red color and sweet-tangy flesh spurting with red juiciness, was even thought to be the fruit Eve offered to Adam.  Because of its role in original sin, the Church believed the tomato to have been cast off to the furthest reaches of man, where it could no longer be the tempting source of transgression.  More disconcerting to the Church fathers was that the tomato was deemed a symbol of tempting, bewitching femininity, a threat to the patriarchal boy’s club of the age.  Worse, the hermaphroditic tomato plant self-pollinated, needing not the seed of man.

For nearly a century and a half after being brought from the new world, the forbidden fruit was avoided throughout Italy.  Its use was eventually spurred on by the poor in Naples who cared more about filling empty bellies than subscribing to the wrongful notions of the Church.  It was in Naples that in 1889, the tomato became forever entrenched in culinary history when an Italian pizzaiolo crafted a pizza whose colors reflected the red (marinara sauce), white (mozzarella cheese) and green (fresh basil colors of the Italian Sabauda flag.  He named the pizza the Margherita, for his queen.

Today the once scandalized tomato is as revered as it once was reviled.  The notion of Italian food without tomatoes is nearly impossible to conceive–like a day without sunshine.  Can you imagine salsa–America’s favorite condiment–made without tomatoes?  Without tomatoes, there would be no Bloody Mary, no Caprese salad, no BLT sandwich, no ketchup and no gazpacho.  Soups, barbecue sauces, stews, ceviches, meat loaf–they would all be forever different without the ubiquitous, nutritious, delicious tomato.  To say tomatoes are the fabulous foundation of many a meal is a vast understatement.

In 1993, Deborah Gagnon and Don Watroba founded an upscale, all-you-can-eat Italian buffet restaurant named Mama Lena’s.  Within a year, the restaurant changed its name to the Tomato Cafe, but by any name, this award-winning treasure can’t be mistaken for anything but a unique restaurant concept that provides great value while serving generally very good Italian favorites.  The Tomato Cafe’s mission statement is to “Provide our guests with delicious, high quality food, friendly service in a pleasant atmosphere at a good value.”  Mission Accomplished!  The restaurant has earned a gaggle of accolades, consistently winning or placing high on the Alibi’s coveted “best all-you-can-eat restaurant” category in its annual restaurant poll.  In 2002, manager Deborah Gagnon was named “restaurateur of the year” by the New Mexico Restaurant Association, a tribute to this restaurant’s success.

For me, however, the endorsement I trust most comes from my esteemed friend Jacob Muller, the most precocious fourteen year old I know, who considers the Tomato Cafe his favorite restaurant.  Considering he already knows more about dinosaurs than I’ll ever learn, I put a lot of stock on his opinion.  Like Jacob, I’ve never tried any of the salad ingredients, so eager am I to dig into the main event–five handcrafted pizzas, two homemade soups, three types of pasta, breadsticks, polenta, garlic green beans, fresh broccoli, six sauces, meatballs, ravioli and ice cream with toppings included.

An exhibition kitchen gives you the opportunity to watch as pizza pies are deftly tossed into the air and fashioned into thin crusted orbs of deliciousness.  If a specific type of pizza isn’t available on the buffet line, one of the accommodating pizzaioli artisans can craft it for you.  The gourmet pizza is sometimes ameliorated by non-traditional pizza ingredients–feta cheese, barbecue sauce, piñon nuts, and other savory offerings.  You’ll only find thin-crusted pizza here, but it’s substantial enough to hold the great ingredients that adorn each pizza.  My very favorite is the barbecue chicken pizza in which the barbecue sauce has just the right amount of tang to make it interesting.  The chicken is applied parsimoniously, but what lands on the pizza is moist and delicious.    Also quite good is any pizza in which New Mexico green chile is added.

Two types of soup–a vegetarian posole and a tomato basil–are positioned next to the salad ingredients in the family-style buffet line-up.  The roasted tomato basil soup is one of those comforting home-style soups which will give you pause to contemplate the greatness that is the tomato.  This flavor-rich elixir for whatever ails you is redolent with the aromas of fresh vegetables and Italian seasonings in perfect proportions.

Six sauces such as roasted tomato garlic, white clam, green chili Alfredo, sausage and Bolognese will embellish your choice of pasta.  The white and red clam sauces actually reminds me of my halcyon days in Massachusetts when my palate (and waistline) began to expand as I experienced theretofore foods outside my New Mexican comfort zone.  There’s nothing better on a cold winter day than a bowl of pasta with a generous amount of deliciously chewy clams and a tangy tomato sauce.

New Mexicans might prefer the tasty green chile Alfredo sauce (pictured above) as a pasta topper.  This sauce has a surprisingly piquant taste chile aficionados appreciate.  Next to the pizza, the favorite fare for children of all ages just might be the meatballs.  A tray of meatballs swimming in a tangy tomato sauce is frequently replenished as it seems most diners load their plates with these delicious orbs.  Other patrons prefer the ravioli (available only for dinner and Sunday lunch) which is nearly as big as a Big Chief tablet.

Since 2002, the Tomato Cafe has donated all unused food to feed the homeless, the type of civic mindedness which endears this terrific restaurant to its patrons almost as much as the food does.