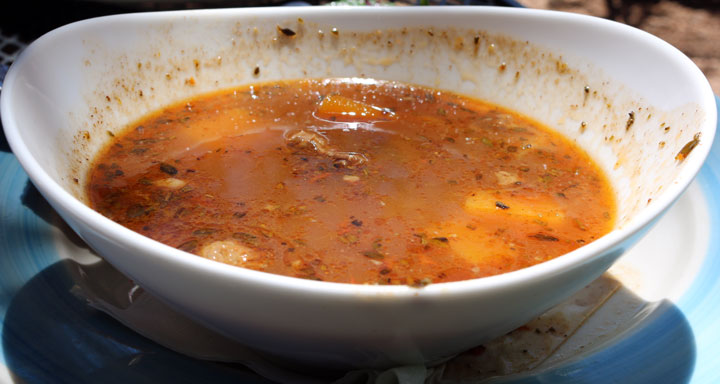 When I suggested to my Kim that our next al-fresco culinary adventure with our dachshund Dude (he abides) should be at the Teahouse in Santa Fe, she shot a glance at me that seemed to suggest advanced mental deterioration had caught up with me. She reminded me that every time we had tea and scones on the banks of the River Windrush in Bourton on the Water (England), I guzzled my tea and tossed bits of my scones at hungry ducks floating on the water. “It was the only way,” I argued “to enjoy high tea without actually being high.” As with most men, the notion of high tea conjures images of women in frilly outfits and flowery hats sipping tea from cups much too small for our sausage fingers and eating finger sandwiches that wouldn’t feed a famished mosquito. It’s right out of a Jane Austen novel.

Our XY chromosome pairing seems to have predisposed men to hate the idea of high tea. We’re just not civilized enough to enjoy it though perhaps if the tea house had a dozen large flat screen televisions tuned to the NFL game of the week, we’d certainly enjoy the experience more. Of course, the tea house would have to do supersize those dainty finger sandwiches and make those delicate scones the size of personal pan pizza Instead of clotted cream (doesn’t that sound awful), some of us would enjoy a spot of brandy with (preferably without) our tea. As for those confoundingly tiny tea cups and their half ounce capacity, they’d have to be replaced by mammoth mugs or better yet, beer steins.

When she contended that the only tea party men have ever enjoyed occurred in Boston back in 1773, I retorted that if Chuck Norris doesn’t go to tea parties, no real man should either though I was making this great personal sacrifice just to make her happy. I didn’t tell her that tea ceremonies (probably another term for high tea) have long been an important part of samurai culture. Nor did I tell her that tea is the preferred beverage of 007 paragons of manliness Sean Connery, Pierce Brosnan and Daniel Craig. Had she already known these facts, I would have argued that everyone knows samurais and spies (who probably prefer their tea shaken, not stirred) are sissies compared to Chuck Norris.

There are other things about Santa Fe’s Teahouse I withheld from Kim. She had pictured some elegant high-brow Victorian manor with lace doilies and delicate china. She thought we’d have to “dress up” (which for me means long pants). There’s no way, she believed, we’d be able to take our Dude. Indeed, the Teahouse belies all the stereotypes her mind’s eye painted about the tea house experience. For one thing, it’s set in a venerable converted home (circa 1839) at the terminus of Canyon Road’s art galleries. Behind a rickety wooden fence, a beautiful garden patio spreads out beneath a canopy of deciduous trees. It’s where cultured canines go to enjoy high tea. Though it wasn’t what Kim had pictured, she enjoyed the experience nonetheless.

Two things got me most excited about a visit to the Teahouse. The first, of course, was the opportunity to enjoy a meal with The Dude, who sports a tail but would never wear a top hat. The second was the menu. It’s wholly unlike the finger sandwich and canape (another French word for hors d’œuvres) menus at those pretentious high-brow tea places. Most men rank a “meal” at a tea house with watching The View, dinner with our in-laws and visiting a proctologist as things we least like to do. The Teahouse menu is akin to a menu at a real restaurant and all food is made to order. It’s not all perfect, however. Egg-based breakfast dishes are served only through noon while dishes such as oatmeal (which should be served only to horses) are available all day long.

A lunch menu is served from noon to five and dinner is available from five to nine though there are several cross-overs between the lunch and dinner menus. The lunch menu lists about a dozen salads, but they’re not the dainty little salads you might expect. We watched several salads being ferried over to other diners and those salads were quite bountiful. So were the panini and sandwiches, the antithesis of the tiny watercress finger sandwiches men dread. Entrees include a panoply of entrees such as lasagna Bolognese, Italian style meatloaf and a “slow cooked dish of the day.” Sides (or appetizers if you prefer) include all those vegetables our mothers couldn’t get us to eat: artichokes, Brussel sprouts, cauliflower and more. Then there are the desserts, an impressive array of sweet things.

The beverage menu is impressive, especially if you love tea. My perusal, however, went only as far as the “espresso, coffee, hot chocolate” section where the Spicy Santa Fe Mocha (two shots of espresso, dark chocolate, Chimayo red chile, cinnamon, vanilla and milk) is listed. Now, this is a the type of coffee to which we should all awaken. It’s bold and brash with more red chile flavor than you’ll find on the burritos at some restaurants. On the teas section of the menu you’ll find dozens of options: matcha, chai, tea lattes, flowering tea, teahouse select (“our finest teas”), white teas, Chinese green tea, Japanese green tea, flavored green tea, oolong, black tea, pu erh, flavored black tea, mate, rooibos, caffeine free infusions and Ayurvedic/wellness teas. Only a true connoisseur would know there are so many different types of teas.

Named America’s “most hated vegetable” in a 2008 survey conducted by Heinz, Brussels sprouts are almost universally reviled. Many diners–adults and children alike–hate them without ever having tried them (probably because they heard someone else express their disdain for this villainous vegetable). As a child, Brussels sprouts ranked right up there with homework and medicine as things I hated most. Today, my rancor is reserved for menus which misspell Brussels sprouts. It’s “Brussels” as in the capital of Belgium not “Brussel!” Okay, so the Teahouse misspelled Brussels, but they prepared them well–roasted with a Balsamic glaze. With a flavor that’s akin to a cross between broccoli and cabbage, Brussels sprouts are never going to win a popularity contest, but every once in a while, you’ll find a version you’ll enjoy. The Teahouse’s Brussels sprouts are among those.

Somewhat less unpopular than Brussels sprouts are beets, perhaps the only sweet thing kids of all ages don’t like. That includes former President Barack Obama who once proclaimed “I always avoid eating them.” It’s no wonder they weren’t in Michelle’s White House garden. To their detractors, beets taste like dirt while those of us who love them prefer the euphemism “earthy.” Even the former would appreciate the Teahouse’s Burrata and Balsamic Roasted Beets, four quarter-inch thick discs topped with a creamy, milky slice of Burrata drizzled with Balsamic. The beet-haters can extricate the Burrata and leave the beets for the “Beetniks.” That’ll keep both haters and lovers at peace.

The entree about which our server was most excited is the Teahouse’s “slow cooked dish of the day,” described on the menu as “heart warming stew or braised dish served with polenta and crusty bread for dunking.” Though “heart-warming stews” are often constructed with vegetables hated by kids of all ages, they can also evoke memories of cold winter days and the comfort of mom’s kitchen. Great fortune smiled upon us because the deliciousness of the day was a stew constructed with butternut squash and some of the most tender and flavorful stew meat (probably ribeye) anywhere in a well-seasoned beef broth. If ever a dish deserved to be served to swimming pool proportions as Vietnamese pho tends to be served, it would be this magnificent dish!

Unlike so many restaurants, the Teahouse doesn’t christen its salads with names as descriptive as those given racehorses. Instead, the ingredients for each salad are listed. My Kim’s choice was constructed from mixed greens, chicken, apple, bacon, Irish cheddar and avocado. With as many mixed greens as filled her plate, I would have preferred a breath-wrecking barrel of bleu cheese. Instead, a simple and lightly drizzled Balsamic vinegar dressing was the only thing between her and the various greens. The Dude and I enjoyed as much of the Irish Cheddar and bacon as we could coax out of her.

The menu has both a “Desserts” section and a section dedicated to “Pastries & Sides.” Unfortunately the actual menus have far fewer desserts than those listed on the Teahouse Web site. Not listed on the paper menu, for example, was the Santa Fe chocolate cake (dark chocolate cinnamon cake topped with dark chocolate and Chimayo red chile ganache). We settled for pastries instead. The almond twist is hardly a consolation prize. They’re not only light-as-air accompaniments to tea. Two (or five) of them will sate a hungry man, too.

Santa Fe’s Teahouse is the tea house for people who hate tea houses. It’s the antithesis of all the stereotypes men have about tea houses.