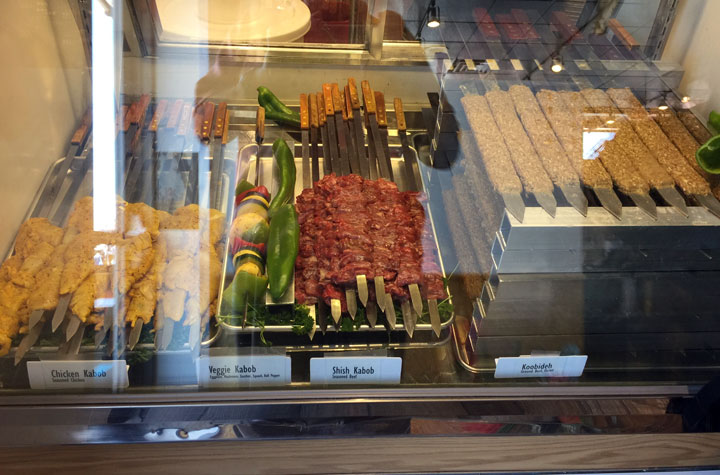 Persian cuisine has been described as “poetry on a plate” and “a pretext to break into verse.” Persian history is replete with a large repertoire of literary quotes about food and drink. Even when the subject of a poem wasn’t about food, a poet’s appreciation for Persian cuisine often inspired the inclusion of culinary terms. Take for example fifteenth-century Persian poet Bu-Isaq of Shiraz who described his beloved as: “lithe as a fish, eyes like almonds, lips like sugar, a chin like an orange, breasts like pomegranates, a mouth like a pistachio” and so forth.”

“Surely,” I thought, “contemporary poets can also be inspired to put to verse and song their sentiments about the loves of their lives using food in descriptive terms. Diligent searches revealed that the twain apparently doesn’t cross. I did, however, find an inspiring poem by Grammy award-winning hip-hop artist Busta Rhymes who pays tribute to his favorite food (and one of mine): “Mrs. Fried Chicken you was my addiction. Dripping with high cholest- Like Greeks with his falafel, Italian with his to-mato pasta. What roti is to a rasta. Trapping me; You and your friend mac’ and cheese. Candy yams, collard greens but you knocking me to my knees…”

My friend Bruce “Sr. Plata” and I were nearly inspired to break into verse and song ourselves the minute we walked into Chello Grill and espied a shaker of sumac, a rich red colored spice with a bright lemony flavor. We’ve both been known to lament the relative meagerness of sumac on Persian and Middle Eastern foods we enjoy. Even though it’s considered an essential ingredient in cooking throughout the region, all too often it’s used in moderation (at least by our standards). We knew we’d like the Chello Grill the moment we discovered that shaker of sumac. It gave us confidence that other Persian spices we love on Persian cuisine–cardamom, saffron, garlic, turmeric and yes, even cumin–would be used in the preparation of dishes we would soon be enjoying.

There’s much to like about the Chello Grill, the brainchild of the entrepreneurial duo of Hasan Aslami and Behrad Etemadi who are becoming quite the restaurant impresarios in the Duke City and beyond. Several years ago they created Pizza 9, a burgeoning franchise named by Franchise Business Review among its “best of the best,” one of the top 200 franchises in America for 2016. Hoping to duplicate the success they had with Pizza 9, they plan to franchise Chello Grill with the goal of expanding across the Southwest. The Chello Grill is located in the Pavilions at San Mateo shopping center, occupying the storefront which once housed Boston Market.

The Chello Grill operates much like a cafeteria. Instead of taking your seat at a vacant table, you’ll walk up to the counter where you’ll undoubtedly gaze longingly at the skewers and vegetables under glass before deciding whether to have Chello Yek (one kabob and one side), Chello Doh (two kabobs and two sides) or Chello Seh (three kabobs and two sides). Chello, by the way, comes from the Farsi word for rice. Rice is indeed a prominent part of every meal as is naan, a fresh-baked flat bread more closely associated with Indian cuisine. Available kabobs include koobideh, ground meat seasoned with minced onion, salt and pepper; chicken seasoned with turmeric, paprika, sumac, salt, garlic and several other spices;  shish kabob, skewered beef along with mushrooms, onions, tomatoes and peppers; veggie kabob (marinated zucchini, squash, tomato, and green chile);  Halal chicken; and Halal lamb.

27 June 2017: Both Bruce and I enjoyed the chicken kabob above all else. The characteristic yellowish hue courtesy of turmeric is punctuated by the characteristic char of a grill. The chicken straddles the fine line between being moist and juicy and being on the desiccated side. A little more either way and it wouldn’t be quite as enjoyable. All too often the shish kabob served in Persian and Middle Eastern restaurants tends to be on the dry side, courtesy of too much time spent on a grill that’s too hot. Not so at the Chello Grill where the grilled beef is moist and delicious. So are the grilled vegetables. A large mound of rice, more than one person can eat, completes the plate.

27 June 2017: Our sides ranged from very good (the mirza ghasemi, a grilled eggplant and tomato dip with plenty of garlic) to good (mast o khiar, a cucumber and yogurt dip similar to Greek tzadziki) to unremarkable (a rather dry hummus). The freshly baked naan is much larger than its Indian restaurant counterpart and quite a bit crispier. Roughly the size of a medium pizza, it goes well with any of the sides, but is just too crispy to use “sandwich style” with the kabobs.

2 August 2017: Long before he became an outstanding IT manager I know, my friend Nader Khalil worked as a chef in Phoenix. He truly understands the nuances of ingredients, seasoning, preparation and the multitudinous factors which play into a great meal. Alas, he hasn’t exactly been won over by some of the Middle Eastern restaurants to which I’ve introduced him. Their common flaw has been in preparing and serving overdone meats which obviously spent too much time over high heat. As a consequence they were on the dry side. By the time he finished his inaugural meal (sheesh kabob and mirza ghasemi), he had declared Chello the best Middle Eastern restaurant in Albuquerque. The sheesh kabob, Koobideh and chicken kabob were prepared to the perfect level of doneness for him. That’s high praise coming from someone who knows his stuff.

2 August 2017: New to the Chello Grill menu is a daily stew served over saffron rice. We stewed over the fact that we didn’t notice that option until after having ordered our meal and sides. Certainly we’ll try the daily stew soon. It’s my practice to work my way through a restaurant’s menu which meant two different sides. Though my calendar showed three afternoon meetings, I ordered a side dish sure to wreck my breath. Called Feta Sabzi, it featured fresh basil with red onions and feta cheese (ask for a side of onion vinaigrette). This is a terrific trio. The basil actually negates the sharpness of the fetid fromage and astringency of the red onion. It’s an eye-opening troika in many ways. The shirazi salad (cucumber, onion, tomato and mint) is a perfect summer salad–refreshing, delicious and oh, so fresh.

20 July 2018:  When we asked owner Hasan Aslami about the torshi (picked vegetables), he compared it to the Italian giardiniera which graces the Italian beef sandwiches at Pizza 9.  He wouldn’t commit to preferring one over the other, indicating they have some similarities but are both excellent.  Torshi comes from the Turkish word “torsh” which means sour, but sour is just one of the flavor and textural notes these pickled vegetables hit.  There’s also salty, garlicky, spicy, crunchy and…addictive. It’s no wonder torshi is considered an indispensable condiment throughout the Middle East.  Chello Grill’s version includes cauliflower, carrots, celery, garlic and other fresh vegetable surprises.  It’s got a very pleasant kick with lip-pursing qualities you’ll enjoy.

20 July 2018: Also on the menu are open-face sandwiches (freshly baked naan topped with tomatoes and parsley, with a cucumber and yogurt spread (mast o khiar), shirazi salad and a pepperoncini on the side).  Sandwiches include a traditional lamb and beef gyro  and eight other sandwich options.  If you have doubts as to whether the rather thin naan would be sturdy enough to hold up against the  volume and moistness of ingredients, you need not worry.  Fold the naan over sandwich-style and slice the sandwich in half vertically and you won’t even lose much of the sandwich’s “innards.”  The most discernible difference between this gyro and the gyro at say Gyros Mediterranean is the size of the lamb and beef amalgam.  Chello Grill’s meat is sliced much more finely, but otherwise is seasoned just as well and is just as delicious.

20 July 2018:  What goes best with an open-faced gyro?  As with most sandwiches, you can’t go wrong with fries.  No ordinary fries does Chello Grill serve.  Instead, they offer feta fries (crispy fries served with feta, oregano, parsley, dill, olive oil and a wedge of lemon).  Our enthusiastic server recommended we squeeze the lemon wedge onto the fries for an “amazing experience.”  Indeed, the tangy lemon did provide a complementary contrast to the fetid fromage.  Even better was a generous sprinkling of sumac which itself has a tangy, lemony flavor.  These fries would otherwise be rather ordinary, but the kitchen’s “doctoring” transforms them into something special.

Service at Chello Grill is exceptional with a friendly and attentive staff at your beck and call. As with Pizza 9, the Chello Grill recognizes the value of customer orientation and good value. Don’t be surprised if this Persian treasure expands similar to its elder sibling and that someday an inspired poem will rhapsodize about that chicken kabob.